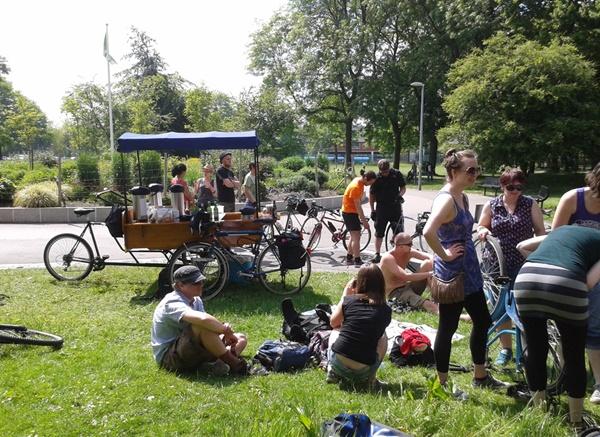 North West Velo Fest 2015, a 10-day festival of free cycling events in Manchester, has begun with a launch party and Random Tandem – a bike lock key swap party. Various other events will be taking place until Sunday June 14.

North West Velo Fest organiser, Kat Malin-August, told Mancunian Matters: “The events will give people the opportunity to experience sides of cycling they may not have encountered before, such us bike polo and mountain biking.”

Friday’s bike lock key swap party gave people an opportunity to try out each other’s bikes and this was followed today by two social leisure rides of different lengths.

Tomorrow will bring the Big Bike Revival at Platt Fields Bike Hub. If you bring your bike along, you will be able to get free parts and servicing. There will also be games, basic mechanics sessions, pedal-powered smoothies and ‘bicycle dancing’.

During the week, other rides will take place, including the Manchester Bike Tour, which promises to reveal some of the city’s ‘hidden gems’; and a tweed ride on Wednesday night, which will involve ‘minimal mileage with plenty of refreshment stops’.

Friday will see the city’s annual World Naked Bike Ride. The Manchester Evening News reported how around 200 people turned out for last year’s instalment – and unlike the recent Canterbury edition, no-one got ‘overexcited’. The ride was said to have passed in good humour and organiser Sean Fitton said it was unusual for anyone to take offence. “In Manchester there is very little of that. I think we had had one person who didn't like it – everyone else cheers and jokes."