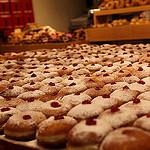 Want to eat all these? Just ride ONE stage of the TdF then...

We all know that just one stage of the Tour de France is harrowing enough that pro cyclists hammer their way through thousands of calories before, during and after the day’s racing, but just how many calories are they able to munch their way through?

Riders famously use energy gels and jam sandwiches to keep them going, but given that it’s just been National Donut Day in the USA, one scientist decided to measure energy expenditure in jam donuts, or jelly as it’s known in the States.

A TdF rider consumes around 30-32 jam donuts per day of racing, covering around 2,000 miles in 23 days, according to Rory McGee Richards, Ben P. Stein, director of Inside Science, and the late MIT physicist Philip Morrison.

Stein writes: “Morrison conducted an investigation of the Tour de France for his 1987 PBS documentary series "The Ring of Truth." (In comparison, a normal adult male eats the equivalent of 12 jelly donuts a day, assuming that each jelly donut is about 250 calories.)

“Where do the remaining 25 donuts of energy get spent? You guessed right--it's wasted--in the form of heat. Now, the human body is a relatively efficient machine. But like all machines, it unavoidably generates heat which cannot be employed to perform useful work.

“This heat--20-25 donuts' worth, according to Morrison--is mainly carried away in the form of sweat created by exertion.

“Competitors drink about 4 gallons of water a day, and this water evaporates from their bodies to carry away the heat. What keeps them cool enough to endure the race, says Morrison, is the streaming wind that hits their face.”

You're probably now wondering what a TdF cyclist ACTUALLY eats. Well we've got the real, tailored nutrition information for you right here.

Many teams now work with a performance nutritionist and have their own team chef who travels with them. This ensures the food being prepared and consumed by the riders meets the above requirements, with the focus always on quality not necessarily quantity. The team chefs need to make sure the food is nutritious and varied, to avoid meal fatigue during the three-week race.

The recommended daily calorie intake for the riders ranges from 4,000kcal to 9,000kcal, while fluid intake can be as high as 10 litres. Typical daily carbohydrate needs vary from 500g to 700g, with approximately two-thirds of this being consumed after the race. Rider variation, weather conditions, terrain and altitude all play an important role in determining rider’s nutritional requirements. No two riders will have the same nutritional requirements.

On waking Riders often consume a juice drink. This helps to kickstart hydration for the day, and provides them with a host of nutrients and energy, without the bulk of eating large amounts.

Breakfast This isn’t much different to what you probably eat before a ride; porridge, eggs, yogurt, bread, jam will all be found at the breakfast table. There will, however, also be rice and pasta options. Probiotic drinks are also used to aid immune function, as the rider’s body will naturally be under a lot of stress.

On the way to the start Transfers from hotels to the start of the race are often long, plus stages in the Tour de France tend not to start until around midday. It is therefore important the riders remember to eat during this time. On the team buses riders will be able to get energy bars, flapjacks or bottles of energy drink/ electrolyte drinks.

During the race For the first two-thirds of most stages, unless involved in a breakaway, riders tend to eat solids and then, as the intensity increases, the riders turn to using the technical nutritional products such as gels. In terms of solid food, riders will start the stage with food and gels in their pockets and pick up additional supplies and bottles from the team car as they go. Alternatively, they can pick up a musette from a team assistant en route at the designated feeds that will include energy bars, energy gels, small sandwiches, homemade rice cakes and sometimes even small pieces of cake. The gels consumed will be both normal energy gels and caffeinated ones. Riders also need to remember to stay hydrated and will consume energy/ electrolyte drinks. As a guide, riders are encouraged to consume 2-3 pieces of race food (energy drink included) per hour and then an extra 500ml of water each hour.

Post-race As soon as the riders get back on the team bus it is essential that the recovery process begins. Recovery shakes are provided along with food such as cooked rice, boiled potatoes and tuna. Getting a 20-25g intake of protein kickstarts protein resynthesis. However, it is the co-ingestion with carbohydrates that has been found to optimize a rider’s recovery.

Evening meal This will change every night so riders do not become bored thus minimising barriers to refuelling. Each meal will typically start with a salad, the main course will consist of meat plus a serving of carbohydrate (rice, pasta or potatoes) and some vegetables. Riders will often have a fruit yogurt or fruit flan for dessert.

Before bed Cereal and milk, yogurt and honey or protein shakes are often consumed before riders go to bed. Sleep has been found to be an extension of the ‘window of opportunity’ for recovery where muscle adaption and repair can take place. Therefore, having a 20-25g intake of protein before bed can be crucial to optimise recovery, especially after a long, hard day in the saddle with more to follow.