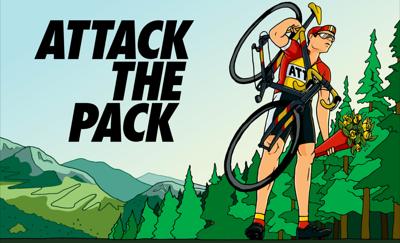 Attack the Pack - the cycling card game - launches on Kickstarter

Set on a stage of a Grand Tour, the game will pitch team against team, rider against rider. Just don't get the bonk. ...
by Laura Laker

A pro-peloton card game where you can race a team of riders, attack the peloton (and maybe win) the stage of a grand tour has been launched today on Kickstarter.

Developed by three friends, including professional cyclist Nathan Haas (Cannondale Garmin), the idea for Attack the Pack came from the trio's mutual love of cycling and games, and their perceived gap in the market for a card game for cyclists.

As in pro cycling the game features riders with different attributes, which players can use to their team's advantage, including by teaming up with other players to launch an attack to win the stage, while weather conditions, the course and other riders throw in added challenges along the way.

Co-founder, photographer Ben Broomfield, said: "It's set as a stage of a grand tour, every player has a team of riders in the peloton and you have to look at your other players' riders and work out the difference.

"You've got to make an attack - that might mean teaming up with another player and deciding to make a break to beat another guy."

Cards that throw in unexpected challenges include punctures, headwind, the bonk, and wheel sucker, along with energy gels, feed zones and a card titled 'panache', will help and hinder players to the sprint finish. "Nathan has given us some advice on the pro's perspective of racing. He's really into games as well - he showed me his kit bag and it's got Uno and playing cards in it. When I said I'm doing this playing card game, he said 'count me in'," he said.

Broomfield hopes the portability of the game will also appeal to cyclists, as mid-ride card games are something he enjoys.

"You stick it in your jersey pocket, you stop at the cafe with your mates, have a 20 minute game and carry on your ride. It's quick, it's fun and the artwork is amazing," he said.

Illustrator Adrienne Hawkes will create the artwork for the cards, and top level Kickstarter supporters can feature as riders in the game, their portrait painted by Hawkes from a photo.

The game's core mechanics, cards and rules have all been created, and if funded the game will be ready to ship to customers in September 2015, during the Vuelta España.

Broomfield hopes to eventually see the game stocked in bike shops, with limited edition packs featuring real players from real grand tours. There may even be carbon fibre cards one day. For now riders are anonymous characters, and top-level supporters.