The Eurobike Demo Day is a highlight of the show. Crowded together out the back of the huge Messe hall that accommodates the world’s biggest bike show are dozens of bike brands, each with a demo fleet of the newest models. And they let us ride them. Yes, just choose the bike you want to ride, hand over some sort of identification, and you walk away with a bike for 30 minutes or so to ride around a designated test route. I’m slightly glossing over the long queues and currywurst stalls you have to battle through. 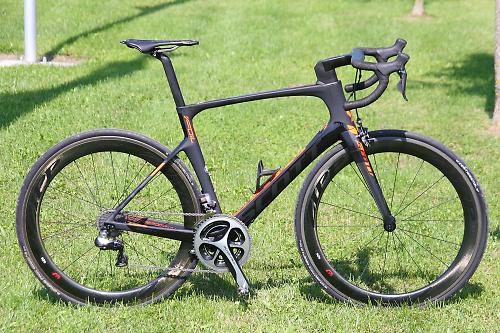 I made a beeline for the new Scott Foil. Launched in the run up to the Tour de France, but spotted in the wild before then, the new Foil ushers in quite a few updates over the original bike, which was launched way back in 2011. The Foil came out at a time when aero road bikes were still in their infancy. Now, the market is awash with aero road bikes, and this year in particular has seen a lot of new and updated aero road bikes join the fray.

The Foil was well received when it launched. It has earned a good reputation as a fast race bike over the years, and stood the test of time well. When I reviewed it, I was impressed. I really liked. For racing, it was without rival. Fast and direct. The downside? The overwhelmingly harsh ride. Take it along a bumpy road, and you really feel every crack and hole. After a long stint in the saddle, you could easily feel battered. 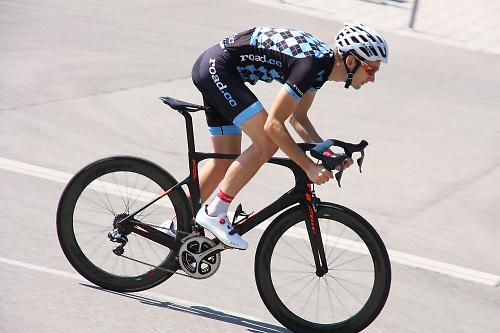 With the updated Foil, Scott claims to have made it a whopping 89% more compliant. That’s a huge claim, a hard to verify claim without some testing apparatus. However, what was clear from my, admittedly brief ride, is that the new Foil is significantly smoother than the older Foil.

The roads in this part of Germany are pretty smooth in general, but I managed to find some bumpier surfaces and here, as the tyres bounced up and down over the ripples in the tarmac, it is evident that Scott has engineered more compliance into the frame. It simply does a better job of isolating you from the rough road surface. 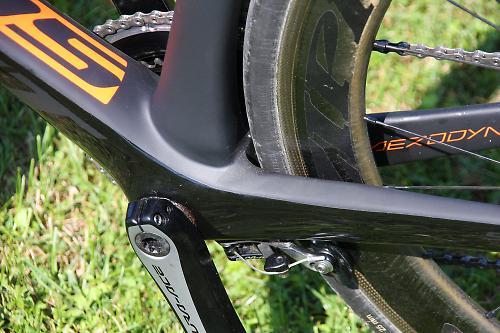 Unquestionably helping in the battle to smooth the unwanted shocks are the addition of the 25mm tyres the Foil can now accommodate - it’ll take up to 28mm if you want to go even wider (IAM Cycling was running 26mm tyres at the Tour de France). The Continental Grand Prix 4000 S tyres are smooth and fast, and combine with the updated Foil to make the ride experience less harsh than it used to be. 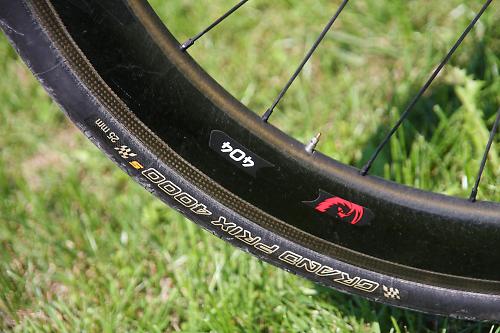 It’ll need a proper in depth test on familiar roads to really discover the extent of the ride comfort improvements, but first impressions are good. How it fares on my local Cotswolds roads is another matter though.

As well as a more comfortable ride, Scott has tweaked every other aspect of the frame that contributes to the overall performance. The frameset has been put on a diet with 70g coming off, a claimed 945g for a size medium. There’s 13% more stiffness in the bottom bracket and a similar amount in the head tube. And it’s more slippery through the air, with a 6 watt claimed drag reduction. That’s worth about 27 seconds over 40km at 45ph, according to a test by the well respected German TOUR magazine. 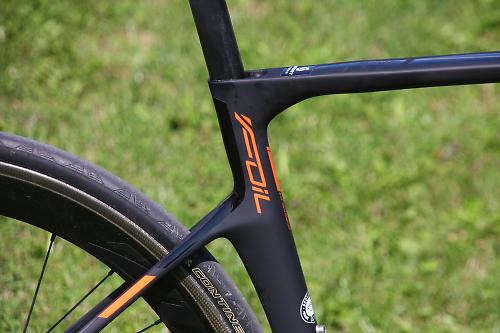 The previous Foil was a very responsive bike. Throwing the new one around the road, sprinting up the road and slinging it through fast turns and around some roundabouts, weaving around electric fat bike trikes, it’s clear the new Foil has the same recognisable directness that made the old bike such a good race weapon.

The handling is fast, just how you want it be in a bike designed for racing and extracting as much speed from your input as possible, with small steering corrections leading to instantaneous changes of direction. Is it any sharper and more direct as a result of the stiffer frame? That’s a tricky question to answer with any validation without some comparison testing against the old bike. 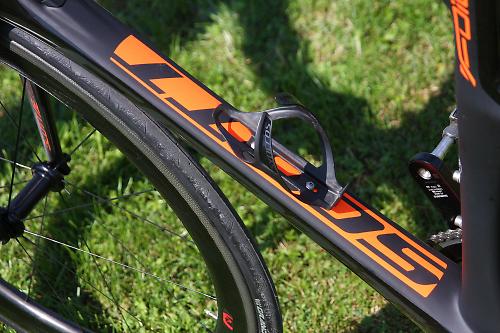 The bike I rode was fitted with a full Shimano Dura-Ace Di2 drivetrain and Zipp 404 Firecrest carbon clincher wheels. They’re fast wheels. They would flatter any bike they’re fitted to. The Scott Foil really makes the most of them, they’re an excellent partner for the frameset. Enough praise has been lavished on the Di2 drivetrain over the years, the addition of the sprint shifters on the drops is a nice touch, and allows for quicker gear changes when sprinting out of the saddle. 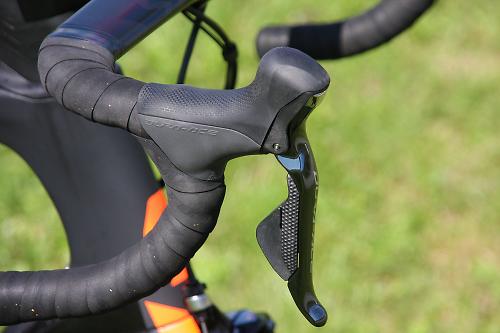 Also fitted to this bike was the new Syncros Carbon Combo one-piece handlebar and stem. Integrated handlebars have been getting more popular in recent years, as bike designers seek to reduce the frontal surface area of the bike. Speaking to some bike designers and aerodynamic experts, it’s clear the handlebar can contribute quite a bit of drag. We’re also seeing the handlebars being used to package away the cables and wires to keep the air flowing smoothly over this part of the bike. 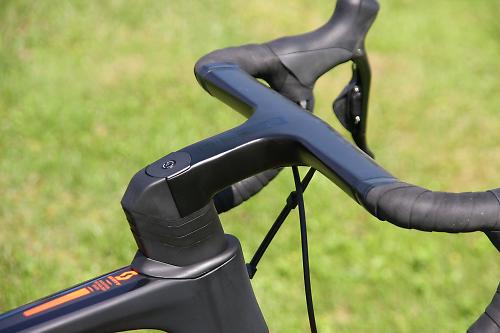 Smoothing airflow around the stem is a wedge shaped section which together with the aero shaped steerer spacers, creates a very seamless section above the frame. Cables from the brake levers/gear shifters are routed inside the handlebar, and the Di2 junction box on this bike is smoothed away underneath the stem. The cables pop out from the bottom of the stem and disappear into the frame via a new multi-port on the down tube.

The handlebars are very stiff. Put loads of force through the drops when sprinting out of the saddle, and it’s impossible to detect any unwanted flex or twist. The aero top section is quite comfortable, but I doubt the broad shape would be still comfortable during a long ride, unless you’ve got huge hands. 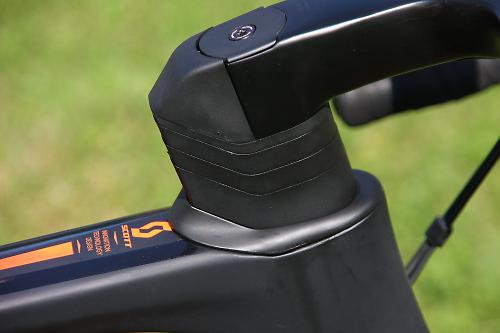 Scott makes the handlebar and stem in nine different width and length options, so you can get your position right, but will require some time with your local Scott dealer to get it sorted. The height of the stem is adjustable too - there are aero spacers that sit between the frame and stem, simply cut the steerer tube to the desired length and remove any unnecessary spacers.  Scott makes a Garmin out-front mount which clips onto the bottom of the handlebar. 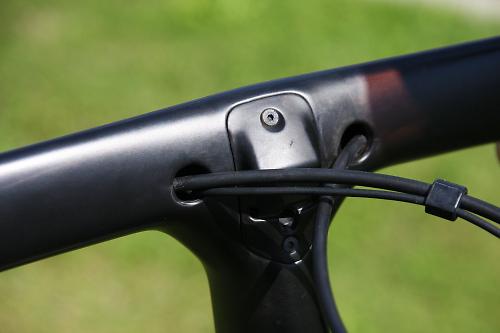 The seatclamp is still internal, but the access bolt has moved from the side of the top tube to the top, located just in front of the aero seatpost. A carbon fibre plate covers, and protects, the bolt. The cables and electronic wires are still internally routed, but Scott has cleaned up the routing. Now, all the cables enter through a single port in the top tube, which is compatible with all the current groupsets on the market. Scott reckons this revised internal cable routing solution is more aerodynamic and lighter. 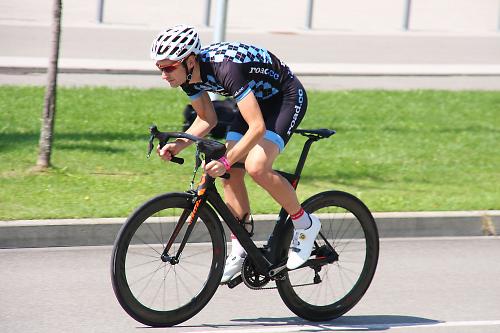 To summarise, the new Scott Foil is a smart evolution of the original with a noticeable improvement in ride comfort, an area where the old bike really suffered. While the lighter and stiffer claims are harder to verify with such a short ride, they are nice things to have and the Foil displays the sort of sharp handling and agility you want in a race bike. We look forward to spending more time with the Foil on familiar roads.