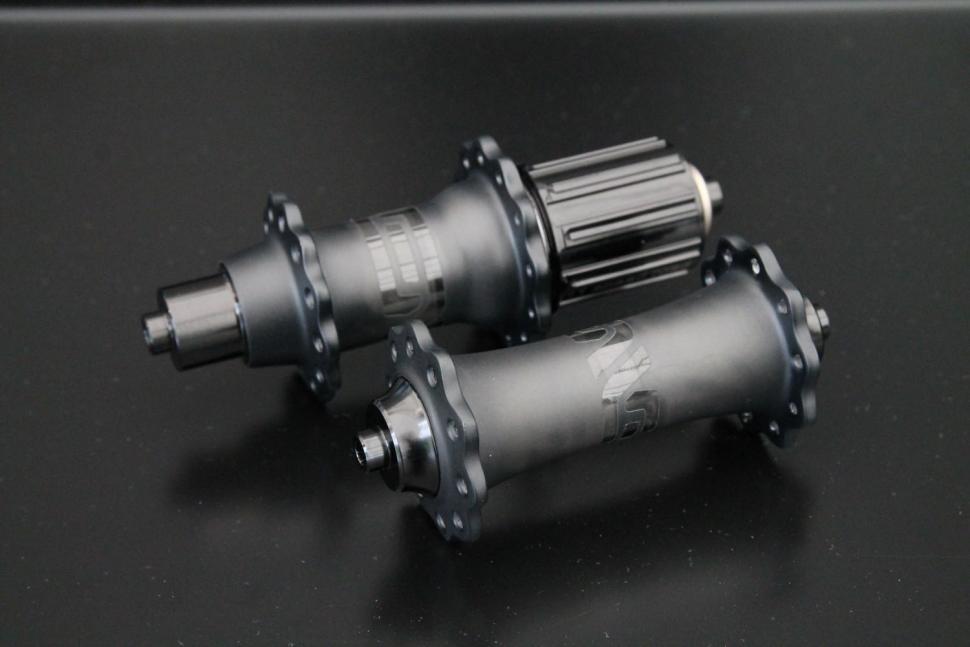 Saddleback (UK distributor of Enve, Felt, Sidi, Stages, Astute and Castelli) last week hosted a show providing us with an opportunity to see up close some of the latest products that are currently making their way into shops, and onto Christmas lists. Here are eight products that grabbed our attention.

The big news from carbon specialist Enve is the launch of its new carbon fibre hubs, which apparently have been 4-5 years in development. They’re light, as you’d expect, weighing a claimed 238g for the pair (74g front, 158g rear) I held the hubs in one and and while I didn’t have my scales to hand, and I’m not going to admit my hand is very well calibrated, they were certainly extremely light.

The new hubs can be paired with the new SES 2.2 rim, which is the latest in the company’s range. They’re 25mm deep and 27mm wide (the rim has been designed with 25mm tyres in mind) have a new brake track claimed to increase braking performance by 30%, and will be available in tubular (pictured) and a tubeless-ready clincher, sadly not displayed at the show. The reported tubular rim weight is 281g.

The rims are manufactured in the same way as regular Enve rims but the key difference with these is the all-new braking track, a sort of file tread texture that is moulded at the same time as the rest of the rim. Enve claims a 30% improvement in braking performance, when used with its own special brake blocks. Impressive, we can’t wait to try them out.

That the new rims are tubeless-ready will be of interest to the growing number of road tubeless fans. A well established technology in mountain biking, tubeless is slowly creeping into the road world at the edges, now a wide number of tubeless-ready rims and improved tyre technology making it easier to convert. Still, there remains a lack of tyre choice with many of the big tyre brands (Continental) yet to offer a tubeless tyre. Schwalbe is a company invested in tubeless and in our experience offers the best current road tubeless tyre.

We had an interesting chat with Enve brand manager Ken Bloomer, who told us that in his opinion there needs to be a tubeless standard, like UST in the mountain bike market, before tubeless on the road really takes off. There certainly needs to be a common agreement between the tyre and wheel manufacturers. He also let on that we might be seeing tubeless being put to use at the spring classics in 2016.

The new 2.2 rim is looking like being available next month, but the exact date is still to be confirmed. A wheelset featuring the 2.2 rim and the new Enve hubs isn’t going to be cheap, with a price tag in the £2.5k ballpark.

Also new from Enve is this SES 4.5 wheelset, which neatly fills a gap in the company’s wheel range between the existing 3.4 and 6.7, combining a 48mm front rim with a 56mm rear wheel. It’s the wheelset that the MTN-Qhubeka team has been racing this season. We'll confirm all prices as we get them.

It’s not a brand new product, but I’m not sure we’ve ever featured it on road.cc before, and since the rain is currently lashing against the office window, now seems a good time to be talking about mudguards.

This one is constructed from carbon fibre, as you’d expect from a carbon fibre specialist, and is extremely light in the hand, and certainly feels very sturdy. The really neat trick is the ability to be able to remove it in seconds, no tools needed, from the bike. Handy for people who don’t want mudguards on their bike when the roads are dry.

The supporting struts simply hook into the bottom of the thru-axle forks, and the top of the fork features two studs that press into shallow recesses on the inside of the fork blade.

Enve hasn’t released a rear mudguard yet, but it is working on one. Key to the front mudguard is the thru-axle fork because that is how it is mounted, so they would look to develop a similar system for a road bike with a thru-axle rear end.

Castelli has launched a line of luggage this season, including two saddlebags, called the Undersaddle. While not a product we usually get too bothered about, these have got us (well me) quite excited. Mainly because the smaller of the two sizes is very compact, just big enough for a tube and a few bits, and should sit underneath the saddle in a very discrete manner, with just one simple Velcro strap to secure it in place.

The Undersaddle Mini (£26) should take an inner tube or two, with some space for a multi tool and spare chain links.

The bigger Undersaddle XL (£33) will obviously carry quite a few more bits and bobs and features an additional Velcro strap to secure it to the seatpost, to stop it swinging about. It also has an additional pump tube on the underside so you really can keep your jersey pockets free for food and spare clothing. No LED light loops though...

Here’s the Castelli Gear Backpack (£130). It’s constructed from a weather resistant material and has padded shoulder straps and a few pockets. Inside there’s a laptop/tablet sleeve and and with a 26L capacity there’s plenty of space for a change of clothes, sandwiches and lot more stuff.

Stages has added carbon fibre cranks to its 2016 power meter range, and here they are. There are now Campagnolo Super Record, Record and Chorus options, and an FSA SL-K Light BB30 model.

Up until now Stages has only offered aluminium cranks, but it has gradually been expanding its range over the years, during which time the company has enjoyed a huge amount of success, helped in no small part by Team Sky using its product.

The challenge in producing a carbon fibre power meter is dealing with changes in the material when the operating temperatures change, according to Stages, not about deflection in carbon. This is the reason why the company hasn’t released a carbon model sooner.

Stages is also working on its own branded power meter, developed by FSA with a hollow carbon fibre construction and will work with 386EVO and SRAM BB30 bottom brackets.

The NFTO pro cycling team has been using these Italian made Astute saddles this season, since Saddleback started bringing the saddles into the UK earlier this year.

The company focuses on performance saddles but has a good range of shapes and there looks to be something for everyone here.

The saddles look good, come in choice of widths, rail materials and the option of an open central channel if you want/need it.

This isn’t a new shoe, and it’s not exactly a road-specific product either, but I know a lot of road cyclists will reach for a winter boot with a mountain bike sole during the winter.

Sidi’s Breeze Rain (£190)  is an ankle-high boot with a breathable waterproof membrane and insulated liner, with a pair of Velcro straps and ratchet to secure the shoe.

The sole has two stud mounts at the front and a grippy rubber tread, and two-bolt cleat system.

The Felt Z4 Disc sits in the company’s endurance road bike range, with a geometry intended to provide a more comfortable ride experience than one of the company’s racier F Series models.

The Z Series is a big range for 2016, as might be expected of such a popular category. This Z4 Disc (£2,099) comes with a SRAM Rival 22 groupset and Fulcrum Sport Disc wheels with Challenge Paris-Roubaix 27mm tyres.

It’s a good looking bike in real life and that looks a pretty solid specification for UK riding conditions, especially the wider tyres.

This is Felt’s splendid looking F4X in Gloss Pistachio colour, with the SRAM Force CX1 drivetrain with hydraulic disc brakes and and Schwalbe X-One Evo Tyres. It costs £2,699.