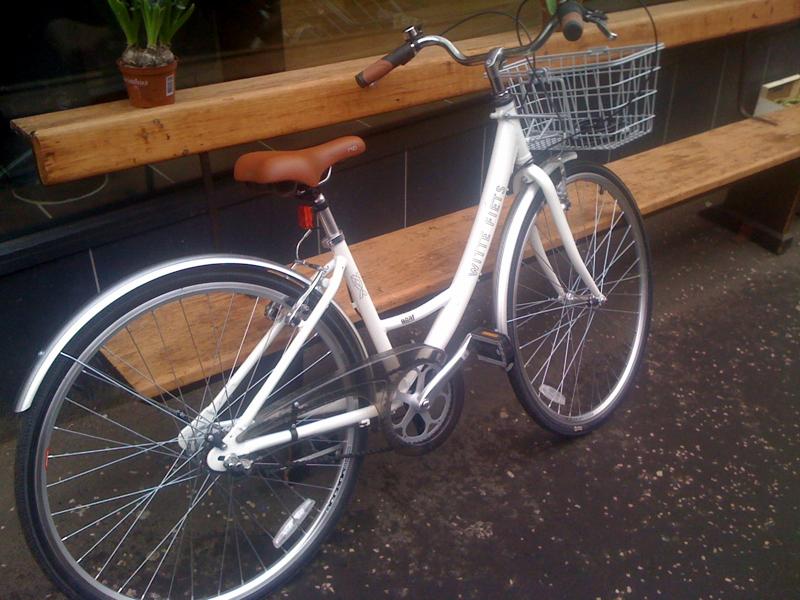 Glasgow White Bike Plan - a 'Witte Fiets' thanks to bazzr

Glasgow's White bicycles are lost to the dark side

Based on the famous Amsterdam scheme in the late 1960s to release white bicycles onto the streets for public sharing, a Glasgow art group has launched 50 free white-painted bikes and immediately lost 30 of them.

The White Bike Plan was supposed to be a highlight of the Glasgow International Art Festival, making a statement about anti-greed and healthy living.

But , according to heraldscotland this morning, it would appear that some of the good people of the city have not completely grasped the ethos of the gesture with around 30 bikes still missing a week after the event ended.

The £5,000 publicly funded project, based on the work of 1960s Dutch anarchist movement Provo, saw the bikes fitted with identical combination locks and the number published openly on the internet.

Once in circulation on the streets, those who knew the lock number could take temporary charge of the bikes until it was spotted and “claimed” by the next user.

However, the bikes became increasingly hard to locate after the white cyclists failed to follow the original aims of the plan and return their bike at night to a number of festival locations. It has now been reported that two of the distinctive bikes, which carry the Witte Fiets logo, have ended up in Germany, with another spotted in London.

Another has reportedly been returned in pristine condition with the combination code altered by one digit, a sign that one cyclist had gone the extra mile to hold on to the public bike.

Angus Farquhar, creative director of NVA, the environmental arts group behind the plan, said the bikes had to be returned so they could be handed on to local charities, with volunteers now having to tour the city to find them.

He said: “I think it is quite funny that you can steal one of these bikes or forget to take one back but, in the long run, we will get you.

“We always knew that we would lose some bikes. The project was based on an anarchist movement, it wasn’t a formal bike scheme.

“One of the things that we decided not to do is track the bikes.

“The project was a re-enactment of an anarchist project and it would have gone against the spirit of it.”

Farquhar said the bikes would not be reported as stolen, but he has contacted Strathclyde Police to confirm what the legal position would be if a white bike was found with the user’s own personal lock in place.

He said he was told to fix one of the project’s own locks and leave a message asking the user to remove their own lock – or it would be removed for them.

The White Bike Plan was commissioned by the Glasgow International Art Fair, which is financed equally by Culture and Sport Glasgow, the Scottish Arts Council, Scottish Enterprise and Glasgow City Marketing Bureau.

Once the bikes are found, they are being held in a lock-up for security. “They are public property after all,” Farquhar said.

He added: “The right wing press will say ‘what a waste of public money’ but that is an absolutely ridiculous position.

“The point of art is to communicate an idea. It was represented in the UK art press as showing Glasgow as a politicised and in-touch community and this project reflected this attitude.

“Whether we lose 10 or so bikes is almost irrelevant. Many people thought that they would all go, but the fact is that we have got almost half of them back.

“It is a question of trust. You can divide human nature between inherent selfishness and inherent generosity of spirit. You could say that we have found about 50/50.

“You would be living in Utopia if you got 50 perfect bikes back as people have to deal with poverty and they have to deal with their own self interest. But we need to liberate them from the individual and give them to deserving causes.

“We don’t look at the project as a failure. The project was not like a test in materialism.”

The original Provo plan in Amsterdam was shortlived due to theft and vandalism, but Farquhar said that the White Bike Plan story was not over yet with the 2014 Commonwealth Games now interested in adopting a similar scheme.

If you spot one of the white bikes, please contact NVA on 0141 332 9911 or visit the NVA White Bike Plan page on Facebook