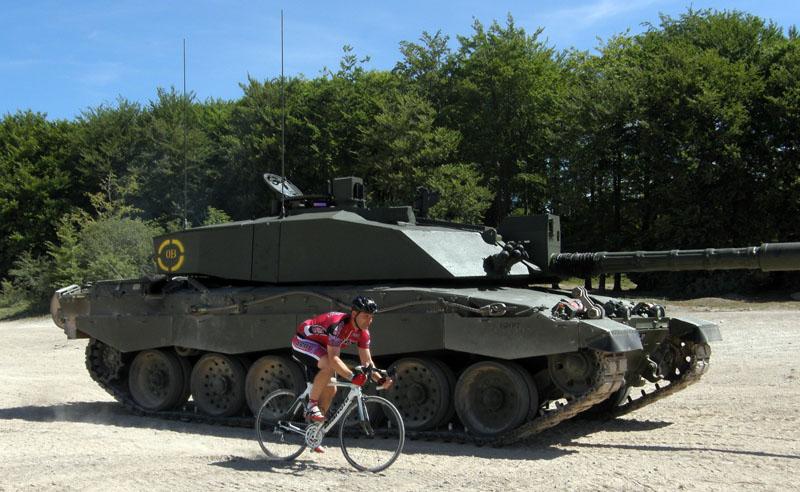 Tank vs bike - Pain on the Plain Sportive

Pain on the Plain – a sportive with a difference

Pain on the Plain this Sunday (25 July) is a sportive with a difference – to add a bit of spice to the ride, the organisers have chosen a route that takes in military roads and tracks more often used by tanks than bikes.

Some of the route is made up of testing (but not too rough) off-road sections similar to the roads of Northern Europe seen recently in the Tour de France and classics like the Tour of Flanders and Paris- Roubaix.

For those riders who would rather avoid the rough stuff, a smoother alternative will be offered where possible by the organisers, Wheels in Wheels.

The routes of 90+ and 60+ miles are being kept a secret to prevent riders from what the organisers call ‘unfair practising’ – and to keep riders away from possible encounters with the Challenger tanks that usually use the tracks. Details should appear on the Wheels in Wheels website later this week.

The event will start and finish in the Garrison Town of Tidworth, west of Andover and not far from Salisbury and Marlborough. They will take in some of the best roads of Salisbury Plain.

The routes will be clearly signed, there will be full chip timing and feed stations en route and all finishers will receive a special “range meal” after their efforts.

A family ride has been organised by the Army offering various routes around the town and entries will be accepted on the day for all routes.

All proceeds from the event will go to the Soldiers, Sailors, Airmen and Families Association (SSAFA Forces Help), the charity committed to helping and supporting those who serve in the Armed Forces, those who used to serve, and the families of both.

Visit the Wheels in Wheels site for more information on the Pain on the Plain sportive and to enter online.