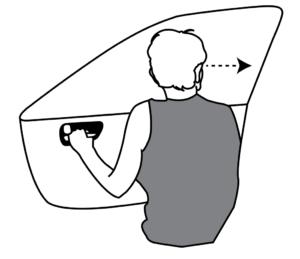 Michael Charney, who claims to have coined the term ‘Dutch Reach’, has called upon the Cambridgeshire Constabulary to disassociate itself from a related method depicted in a recent video. The founder of dutchreach.org points out that unlike the conventional technique, the one seen in recent press coverage is not recommended by the Royal Society for the Prevention of Accidents UK (RoSPA).

The Dutch Reach is a technique for opening car doors where you use your opposite hand. Taught to learner drivers in the Netherlands, it twists the motorist around so that they can’t help but look behind them, reducing the chances of accidentally dooring a passing cyclist.

The technique is currently being advocated by Cambridgeshire police. However, Cambridge News, The Daily Mail and The Sun all ran recent stories featuring a video purporting to demonstrate the method in which the motorist reached out through the window to open the door from outside.

The conventional version of the technique involves opening the door from the inside.

Photo captions appear to indicate that the video was produced by SWNS.com, a Bristol-based news agency.

Charney said of the video that he “could not tell if it was responsible journalism or a prank.”

In an email to Cambridgeshire police, he wrote: “I am deeply concerned that the Cambridgeshire Constabulary has apparently – if internet press reports are to be believed – chosen to conflate a ‘lean out of the window’ method with the ‘Dutch Reach’. I hope this is not the case, and respectfully beg clarification from you on this matter.”

The Dutch Reach has recently been recommended by the RoSPA but Charney says the organisation does not recognise the ‘open window lean out’ method depicted in the video.

He adds: “That Cambridgeshire Constabulary chooses to offer an alternative, possibly superior method, is commendable. But should it not rise and fall on its own merits, known by its own name?

“Please, if this is Cambridgeshire’s doing, do not ride upon or pull down the Dutch Reach when promoting the lean-out method.

“I sincerely request that you and the Constabulary take rapid and appropriate steps to make clear this distinction publicly clear: Do call yours the “Cambridgeshire Lean Out” if you will – but please disassociate that method from the Dutch Reach proper.”