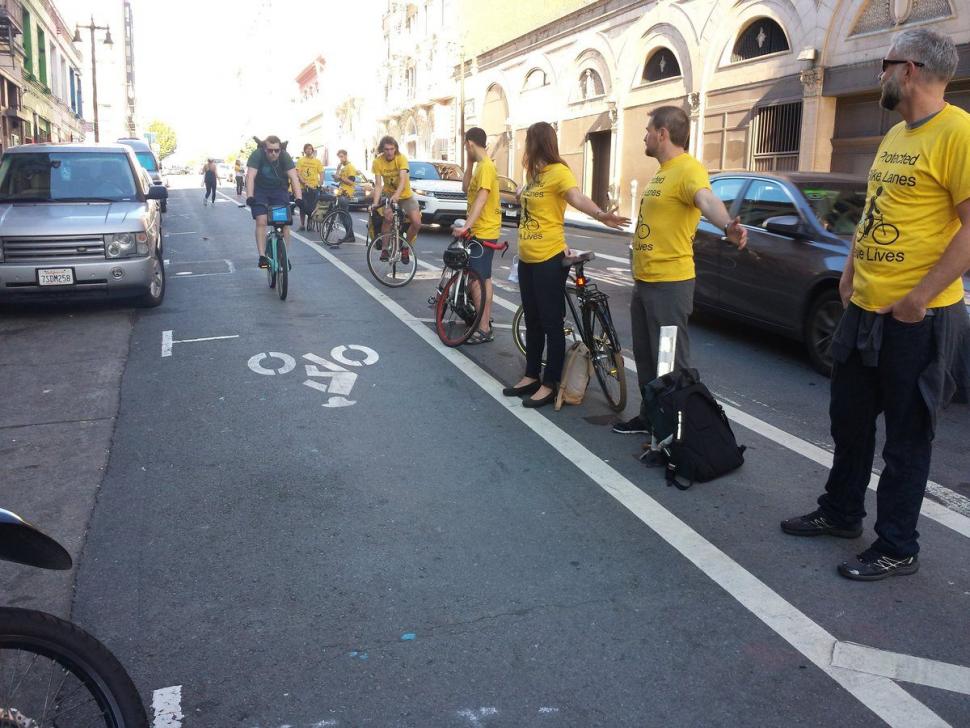 Cycle campaigners in San Francisco have formed a ‘human protected bike lane’ to call for safer infrastructure for people who ride bikes in the northern Californian city.

It happened on 1 May, the day before the director of the San Francisco Municipal Transport Authority (SFMTA, the name of which inspired that of the campaign group) was due to meet to discuss possible protected cycle lanes on Market Street and Turk Street.

“She thought, ‘I put my unarmoured body in this unprotected space next to cars – the bike lane – daily. What if a bunch of us put our bodies in this dangerous space to make a statement about our daily unsafe riding conditions and temporarily make the bike lane more safe for other cyclists?’

“I heard the idea and thought it was brilliant."

He continued: “Our shirts have an illustration of a parent bicycling with a child.

“If a parent wouldn't walk a stroller in an unprotected bike lane next to moving car traffic, why do we expect them to bicycle with their children in this dangerous space?"

The reaction, according to Brezina?

“Cyclists cheered and said ‘thank you!’ Drivers stayed in their lane instead of entering the bike lane, which was a goal of our effort.

The SFMtrA has already enjoyed some success in making conditions safer for the city’s cyclists.

In November, we reported how it had installed a guerrilla separated bike lane on the city’s Folsom Street that the authorities subsequently decided to make permanent.

You all made this happen. #DemandMore pic.twitter.com/rtQS5EZKIX