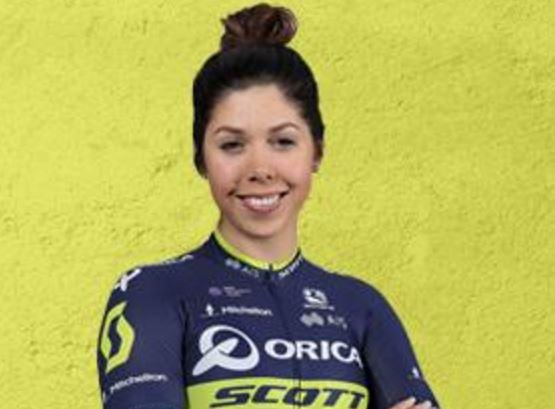 Australian track and road cyclist Georgia Baker, who rode in the team pursuit at the Olympic Games in Rio last year, is recovering after undergoing heart surgery.

The Orica-Scott rider was taking part in the Women’s Tour in the UK in June when she was suddenly struck by chest pains.

The 22-year-old, whose father Patrick died from a heart attack two years ago, was diagnosed with supraventricular tachycardia after undergoing medical tests on her return to Australia.

Quoted on Bega District News, she said: “It has put a hold onto things I wanted to do but at least now I can move on and start looking forward to my next goals.

“When I was having the operation I obviously found it hard not to think of Dad during that time but I felt I was doing the right thing.

“I felt sad and uncomfortable but more relieved that I was getting it fixed and would not have to feel that again.”

A former junior world champion, Baker was called up to Australia’s team pursuit line-up for Rio, but after a crash in training they missed out on racing for the medals, posting the fifth fastest time in the first round.

After Rio, she switched to the road with Orica-Scott and said: “We went to London for the women’s tour there and on the first stage I started getting horrible pains in my chest.

“My heart-rate was elevating and I had no control over it. We weren’t even actually racing, it was just the controlled start so we weren’t going hard but my heart-rate was through the roof and I knew it should not be like that.”

“I’d had a similar thing in Tasmania when I was motor-pacing with [her coach] Matt Gilmore so I thought it was just a tight muscle across my chest and there was nothing much wrong.

“But in the end I thought you cannot muck around with this so I stopped and pulled out.”

“He said given the history with my dad, he did not want to leave any stone unturned because we still did not know what was wrong and I couldn’t ride my bike,” she said.

“I had an over-active nerve around my heart which makes it beat a lot faster randomly and I have no control over that.

“Even going from sitting down to standing up my heart-rate could increase to 130-140 beats per minute.

“It’s not uncommon but given it was happening every day and was getting worse, if I wanted to continue riding my bike and just being physically active I would need an operation.”

It transpired that her condition was hereditary.

"It was something I was born with and is hereditary,” she explained.

“There is a high chance Dad had what I had but I’ve been told it’s not life-threatening so I don’t think he would have passed away from it but there may be some correlation.”

Speaking about her treatment, Baker said: “They had to burn parts of the nerve with a laser to fix it and I was awake throughout that. It was very painful.

“They did a really good job and are 95 per cent sure they got everything and if it did come back it would be really mild.

“I’m just glad they figured out what was going on because it’s been going on since June so I’m really happy it’s over and done with.”

She is due to return to training in the next week or so, and has her sights set on next year’s Commonwealth Games in Queensland as well as the 2020 Olympics.

“This has not put a stop on anything. If anything, it has made it a lot better because I won’t have to worry about it anymore.

“Tokyo is definitely within reach, and so is Gold Coast – that’s my next goal.

“The last couple of years have been a real roller-coaster but I feel there’s been more downs than ups. I’m just glad to get this out of the way and I’m sure everything will turn around with my riding.

“After the Olympics, it was pretty hard. I had not really dealt with the loss of my dad very well. When he passed away I had just two weeks home then was back into trying to make the Olympics.”

She added: “I had to face the fact that Dad was not around anymore and that was hard to come to terms with but I’m making progress and now hopefully I’m onto positive things.

“I feel the worst has happened and I can only move forward so I’m looking forward to the next few years riding my bike.”