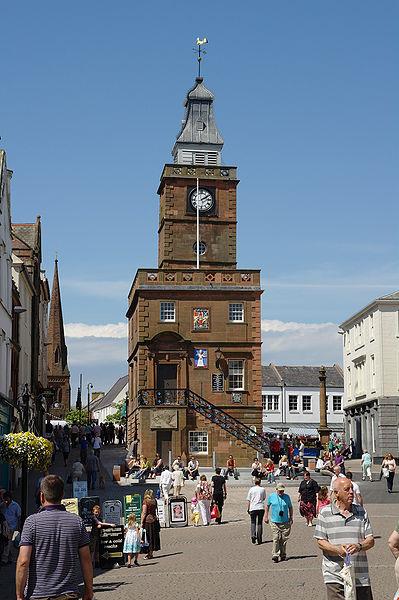 The market town of Dumfries in South West Scotland may seem a million miles from London – in reality, it’s a little under 350 miles by road – but this week it joined the UK’s capital in launching its very own cycle hire scheme, the first such initiative North of the border.

At £155,000, the scheme, called BIKE2GO, costs a fraction of the estimated £140 million that will be ploughed into the Barclays Cycle Hire Scheme in London, and sees nine hire locations being set up across the former royal burgh in an initiative designed to promote greener, healthier lifestyles.

Operated by Hourbike, which already has similar schemes in Blackpool, Bristol and at Dublin Airport, 30 bikes will be available with an annual £10 membership fee and journeys free for the first 30 minutes and £1 per hour afterwards.

The scheme is managed by the South West Regional Transport Partnership (SWestrans), whose chair, Councillor Brian Collins, commented: “We’re delighted to be the first local authority in Scotland to offer a bike hire scheme, putting us on an even footing with some of Europe’s most famous cities in offering local people the chance to take convenient cycle journeys whenever they need to.”

Councillor Roger Grant of Dumfries and Galloway Council added: “Research has shown that participation in cycling rises when people are given access to hire schemes such as the BIKE2Go project, and I look forward to seeing locals enjoying themselves on bikes all around Dumfries.”

The project was formally launched yesterday by Scottish Transport Minister Stewart Stevenson, who also unveiled a new £150,000 interest free loan scheme from Cycling Scotland designed to help the country’s private businesses meet the cost of bike-friendly facilities at the workplace including bike shelters and changing facilities.

Mr Stevenson said: “I’m delighted to be launching both of these initiatives to encourage people to get out of their cars and onto their bicycles. Scotland has established world-leading targets to cut greenhouse gas emissions and providing more sustainable transport alternatives will help us meet those targets. We are also committed to improving our nation’s health, and our investment in these schemes underlines our commitment to achieving these goals.”

He continued: “I’m sure both visitors and the local community will welcome this opportunity to take convenient, affordable bike trips in and around Dumfries, replacing their shorter car journeys with a greener, healthier alternative.”

The initiatives fall under the Scottish Government’s Smarter Choices, Smarter Places (SCSP) programme, aimed at helping people make the move to sustainable transport as part of Holyrood’s goal to have 10% of all journeys in Scotland made by bicycle by the end of the decade.