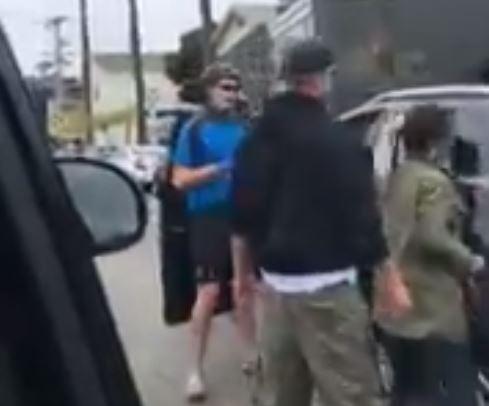 A cyclist in California got a big surprise as he rode through traffic – among the vehicles he passed was a black SUV that had been stolen from his wife. The woman at the wheel fled the scene, but was caught by witnesses.

It was caught on mobile phone by Matthew Santoro, who happens to have more than 580,000 followers on Twitter and 6 million subscribers on YouTube, and who was in a passing vehicle.

So this just happened.

This guy just stopped traffic because he found his wife’s stolen car. The woman driving it ran off. This happened in Venice. If anyone knows how to get this to the authorities please send them this video. pic.twitter.com/U3bWYe7lRU

His footage shows the cyclist on the phone, presumably to the police, with his bike propped against the front of the car to prevent the driver from making off in the vehicle – not an easy task, given the traffic.

Instead, while he was mid-call, she started to walk off at a very brisk pace but was chased down by witnesses.

The woman, 39-year-old Erica Puig, now faces charges of grand theft auto, according to the Los Angeles Police Department, who confirmed that the vehicle had been stolen from Santa Monica.

Afterwards, Santoro said on Twitter: "We captured it and the LAPD retweeted it, and they DM'd me and said thank you for basically capturing somebody."