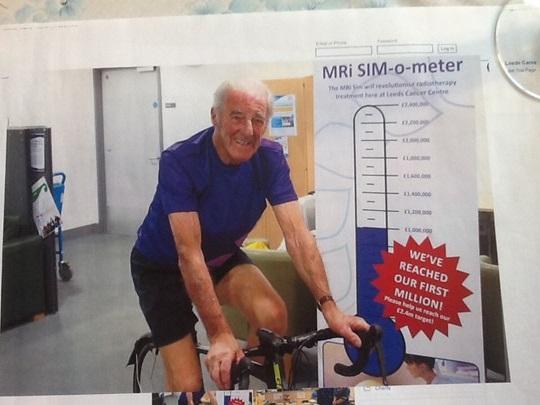 Cancer survivor aged 82 to ride London to Paris next month

An 82-year-old cyclist who survived bowel cancer is to ride over 300 miles from London to Paris to raise money for to help buy new state-of-the-art equipment for the cancer centre where he was treated.

Brian Graham, from Maiden Newton in Dorset, was living in North Yorkshire when he was told he had cancer early last year, reports the Dorset Echo.

He was treated at the Leeds Cancer Centre and now wants to help  raise money towards its appeal to buy a magnetic resonance imaging (MRI) simulator which it says will be of vital benefit to the 450 patients it treats daily.Mr Graham, who served in the armed forces then set up a construction company told the newspaper: “I went on my bike to the doctors for a blood test.

“At 3am the next morning I had a phone call from hospital staff who had assessed my readings. They told me to immediately get up, drink strong tea and eat toast and get to my doctors first thing.

“I had suspected bowel cancer and it was pretty bad. I was referred to Airedale Hospital where it was confirmed, and I was fast tracked for treatment.

: “I was fit and healthy. I cycled, played tennis and had a good diet but I had this large tumour that needed to be removed,” he continued.

After undergoing chemotherapy and radiotherapy, Mr Graham had surgery to remove part of his bowel.

As he recovered from his operation, he heard that the Leeds Cancer Centre was raising money for a new magnetic resonance simulator.

In his London to Paris ride, which begins on 12 September and will take four days to complete, he is being sponsored by Medilink, the company that supplies the stoma bag he now has to use following his surgery.

The £500 it has donated via parent company Salts Healthcare is part of more than £2,500 Mr Graham has so far raised through the website Just Giving.