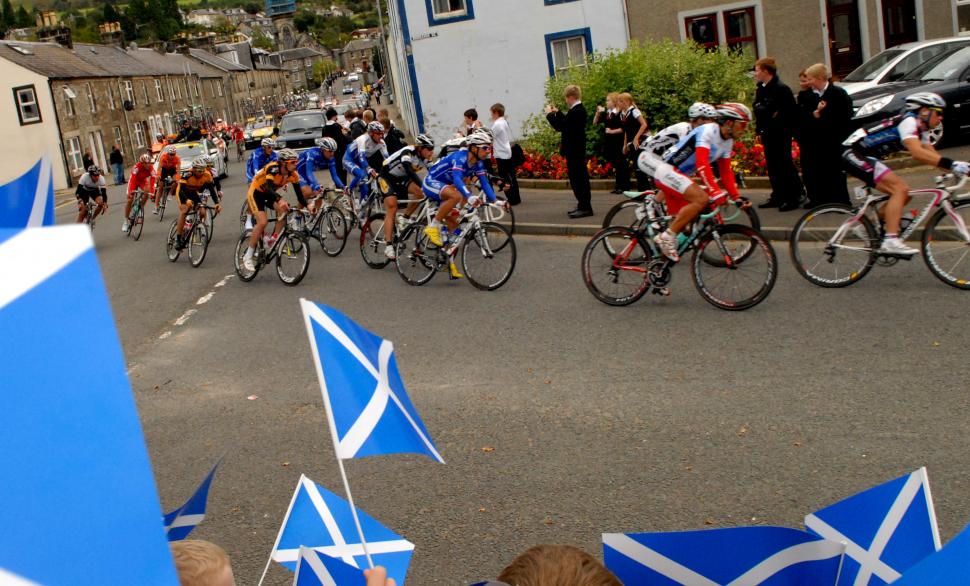 The 2009 Tour of Britain in Scotland.JPG

Opening stage will end in Dumfries and Galloway
by Mark Appleton

The Tour of Britain is kicking off north of the border this year and Scotland is already gearing up to host the Grand Depart  with preparations for the big day, Sunday September 11, well underway.

The precise route of the first stage of Britain’s national Tour has yet to be released, but it will be run between the Scottish Borders and the Dumfries and Galloway regions.

Hugh Roberts, Chief Executive of SweetSpot Group, organisers and promoters of The Tour of Britain, said: “We are very happy to be returning to Scotland in 2011 and look forward to a warm welcome once again this September”.

“Preparations for the Grand Depart are progressing very smoothly, and we, along with our partners at EventScotland, Scottish Borders Council and Dumfries and Galloway Council, have a busy eight months ahead as we make all the preparations to ensure that Sunday 11th September is an unforgettable day for cycling in Scotland.”

Paul Bush OBE, Chief Operating Office for EventScotland said: “Scotland is ready to welcome The Tour of Britain back over the border in September. There is a real buzz in the country at present around cycling after Scotland’s success in Delhi and ahead of London 2012 and the Commonwealth Games in Glasgow in 2014. It is great to have such an exciting and successful event on our doorstep for the wider community to support and get involved with.”

Full details of the route the stage will take will be unveiled in the Spring, but the Scottish Borders has been confirmed as hosting the start of the opening stage. This will be the second occasion that the area has welcomed The Tour of Britain, following Peebles holding the start of Stage Three of the 2009 Tour.

Dumfries and Galloway, meanwhile, has been involved with The Tour of Britain since 2005, hosting both stage starts and finishes in recent years, the most recent in 2009 when Edvald Boasson Hagen took the win at Gretna Green on his way to overall victory in The Tour.

As for your chance to get involved in the fun, further details of The Prostate Cancer Charity Tour Ride Scotland will be announced shortly. In the meantime riders can register their interest in taking part by visiting www.tourride.co.uk