As far as the fixie and single speed market is concerned, it looks like the hype has now subsided and it is down to business producing bikes for a smaller, more dedicated scene. There isn't much whacky new stuff like we have seen in the past couple of years with companies trying to jump on to the hipster bandwagon and failing because fashion moves a bit faster than bike manufacturers lead times.

Things now appear to be more serious, more established and maybe even a little bit more mature *shudder*. I was hoping to see an injection of technology with maybe a flurry of carbon ss (single speed) road bikes as fast, low maintenance commuter/training bikes or maybe a utility bike made from the wonder plastic, but aside from the BMC Masschallenge alas no, well not yet anyway… this is a big show and I haven't seen half of it yet so there's still a chance. The main fixie camps seem to be the fashionable freestyle bikes with huge 45c tyres, wide handlebars and components borrowed from BMX (14bikes from London offering a very good example with their practically bomb proof ESB frame designed by Super Ted) or as fast, low maintenance bikes with lightweight parts all made to follow a traditional, almost retro look with prominent lug work, oh and polo bikes have had more than a couple of representatives and practically ALL bikes made from good ol' steel. 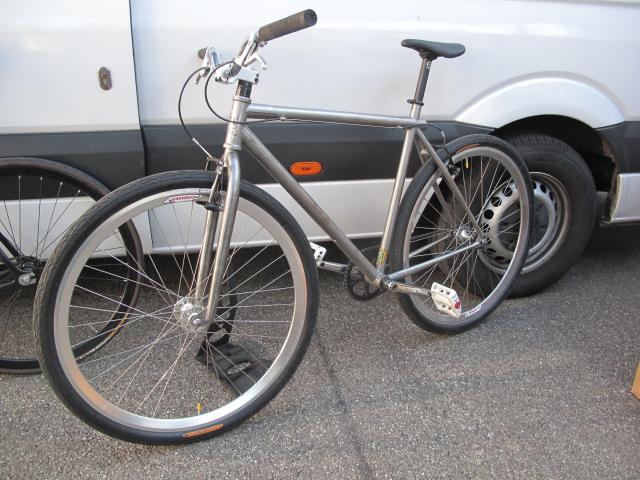 I can't see why you can't have a modern looking single speed bike? The only carbon bike that I have seen with slotted dropouts and that fits the brief of a simple, fast single speed bike in modern materials was at the show rather than in it, I spotted it propped up outside the exhibition halls and belonging to the editor of 'Fixed' magazine in the UK, Mr. Andy Ellis. 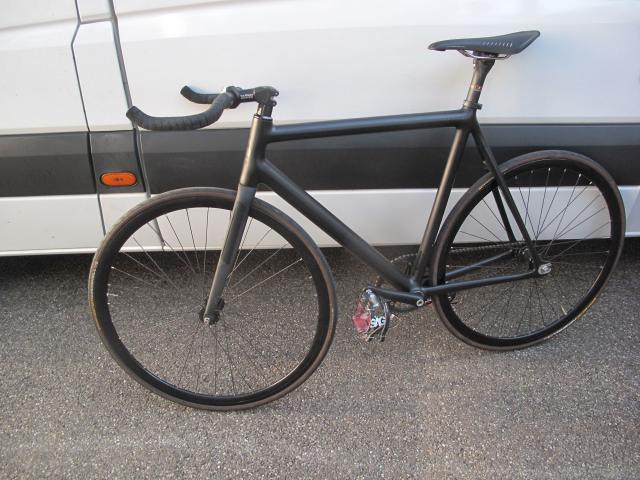 The frame was designed by Patrick Seabase, former Gorilla bikes owner and a man that has some pretty good skills at riding down mountains as well as riding up them. Watch him on THAT bike conquer the Stelvio below, the man is an animal. I think the company name was Brasco.

SEABASE vs STELVIO from YUHZIMI Ltd. on Vimeo.

The Italian hall had, as always, a sumptuous offering of pretty hand-built steel bikes. Decorated like a gypsy caravan with highly polished shiny bits and strong colours. Nothing new, still very traditional, mainly lugged, all steel and all very Italian. Bianchi only had two one geared bikes on show, the classic pista and their aluminium track bike. It would be sad if they have dropped their former offerings that had a very stylish, retro look. Oh hang on, on reviewing my photos I almost forgot Pinerello's offering, straight from the dressing up box. Joining their stable of subtle, chic and sharp road bikes are some fixed and singlespeeds one steel, lugged old skool bike, one lairy aluminium track bike sharing the same colour chart as a box of hundreds and thousands, both of which were here last year, and lastly, and probably the most 'out there' ss bike we've seen so far is their aptly named 'only the brave'. A frame built from a mix of carbon and aluminium that looks like it had beed modelled from clay then man handled a bit like when you were a kid and had just gelled your hair only for your uncle to ruffle your barnet when greeting you… well, I did ask for something different. There's much, much more to come though so let's see what the rest of the show brings…