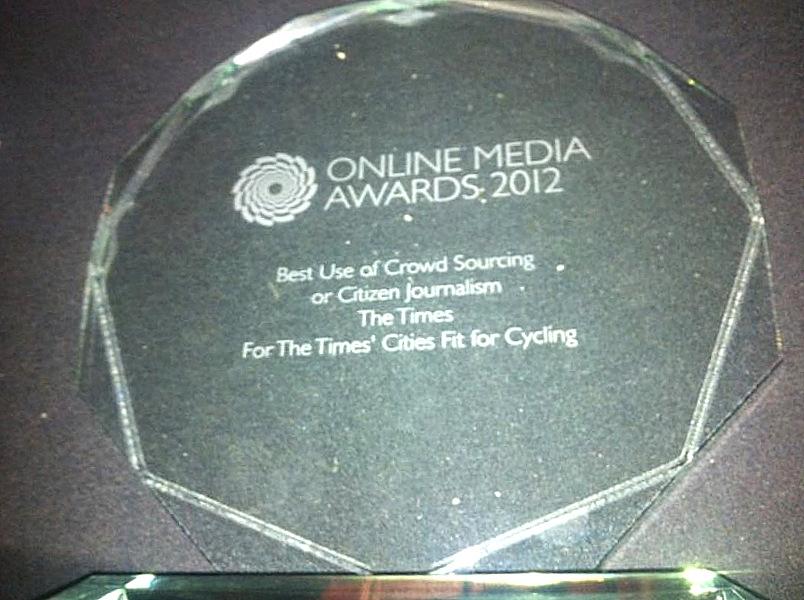 The Times wins award for Cities Fit For Cycling Campaign

Praised for interactivity and use of crowdsourcing
by Sarah Barth

The Times won an award for its cycle safety campaign, Cities Fit For Cycling, last night at the Online Media Awards.

Cities Fit for Cycling won the category for best use of crowd sourcing/citizen journalism. The judges were particularly impressed at how the paper had generated “ lots of reader stories and details and insights”.

In total, over 35,000 people have pledged support to Cities fit for Cycling, contributed over 7,000 stories and identified the 10,000 most dangerous roads to travel by bicycle.

Although The Times website is behind a paywall, the cycling campaign pages are usually public, allowing all cyclists to point out on an interactive map the junctions and roads that they feel least safe on. There is also a form for cyclists to petition their MP to improve cycling facilities in their area.

On a supplementary blog, I Love My Bike, cyclists can celebrate the more joyous side of their sport and hobby.

The paper's campaign was sparked by a tragic accident; reporter Mary Bowers was cycling to work when she was hit by an HGV just metres from the Times office in November. She remains in hospital in a sub-conscious state.

In February, Cities fit for Cycling launched, with a manifesto that included eight points for safer cycling that several city councils, including Cambridge and Bristol, have adopted in full.

The points include better cycle training and the appointment of cycling commissioners in every city.

Since then, the campaign has inspired a Parliament debate in Westminster Hall, attended by over 80 MPs, and brought about a Commons committee inquiry into cycle safety.

The paper also hosted a mayoral hustings, specifically to create a debate between London mayoral candidates about the future of cycling in the city.

So far this year, 40 cyclists have died on Britain's roads.