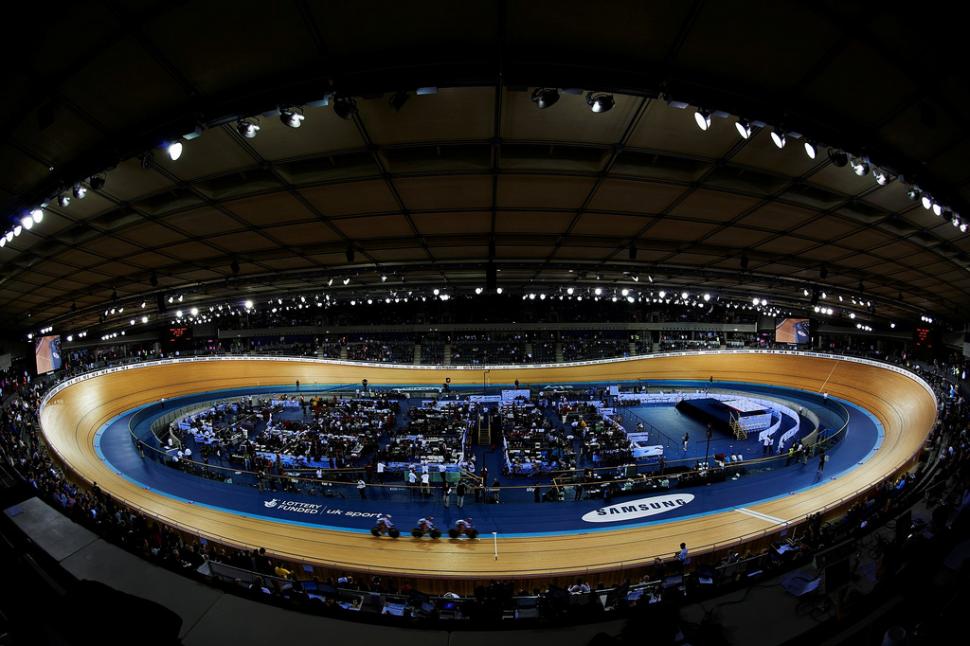 A huge night for Great Britain in the Olympic Park's Velordrome has brought gold medals for Victoria Pendleton in the keirin and the men's team pursuit squad, the latter setting a new world record, as did their female counterparts in their qualification heat today and are red hot favourites to win that event tomorrow.

The men's team pursuit squad's new world's best time was set as they outclassed Australia to retain the Olympic team pursuit title they won in Beijing. Throughout the final, they were cheered on by a packed crowd in fthe Velodrome, including Bradley Wiggins, a member of the quartet that took gold four years ago.

Pendleton put yesterday's team sprint relegation disappointment behind her to win gold in the Keirin, holding off China's Guo Shuang, with Hong Kong's Wai Sze Lee a surprise third and world champion Anna Meares surprisingly out of the medals.

Having set a new world best time in qualification yesterday, world champions Great Britain always looked comfortable as they qualified for this evening's final in their Round 1 race against Denmark. Australia, who lost their world championship title on home soil to Great Britain in Melbourne in April, would be their opponents, having dispatched New Zealand en route to the final. The latter would beat Russia to take bronze.

The four riders who took to the track for Great Britain in both races this evening were unchanged from those who had qualified yesterday - first time Olympian Peter Kennaugh, plus three riders who came back from Beijing with medals - Geraint Thomas and Ed Clancy, part of that victorious team pursuit squad, plus Steven Burke, who had travelled as reserve in that event but did not race, ad instead picked up bronze in the individual pursuit, won of course by Wiggins.

As in Beijing, the team pursuit squad here in London comprised five riders, but this time it was Andy Tennant who missed out, and of course he will not have the cosolation of targeting the individual pursuit, now dropped from the programme.

The man who is the world record holder in that event, Australia's Jack Bobridge, led off Australia in the final but the British were already ahead by the end of the first lap. Riding alongside Glenn O'Shea, Rohan Dennis and Michael Hepburn, Bobridge put in another big turn at the front that managed to narrow the gap between the two countries, but the British quartet always seemed in control.

With Australia down to three riders a little inside the final kilometre, Great Britain never let the pace slacken, coming home in a time of 3:51.659, nearly three seconds quicker than their opponents, completing their gold medal winning ride at an average speed of 62.160 kilometres an hour.

“It’s a surreal feeling,” Kennaugh admitted afterwards, "and one that we will only come to terms with in time. It feels like we’ve talked this to death over and over again, and now we’ve done it and we’ve won, it feels strange.”

Ed Clancy, who now adds a gold in London to the one he won in Beijing, added: “I can’t explain how I feel, we’ve spent so many years thinking about this moment, and when it happens there’s just a massive explosion of emotion.”

The final had long been billed as a showdown between world champion Meares and home favourite Pendleton, but the Australian’s challenge failed to materialize when it counted and she would trail home a disappointing fifth.

Last but one of the six riders as they completed the five and a half laps behind the derny, Meares rode strongly once the pace-setter pulled off with two and a half laps to race and was leading as they headed along the home straight and into the final lap.

Pendleton, who had been tracking the Australian’s move, burst to the front as the bell sounded and Meares, surprisingly, failed to respond. Instead, it was another rider relegated in yesterday’s team sprint, China’s Guo Shuang, who pushed the British rider all the way, Pendleton just keeping in front as Shuang desperately tried to close the gap.

“I can barely believe it,” reflected Pendleton, who still has to defend the individual sprint title she won in Beijing. “It was really hard with the excitement of the girls [team pursuit] doing such a great job qualifying with a world record, and then the guys smashing the world record and winning gold, and I was just trying to keep my focus.

“Jan [van Eijden, British Cycling track sprint coach] told me to just race my own race. My legs were good from last night and I still really wanted to show what I’ve got and it went okay I guess!”

There had been a heart-stopping moment for Great Britain fans earlier when Pendleton briefly appeared to be in trouble in the second qualifying heat, which paired her with Meares.

The British rider, who had been riding immediately behind the derny before it turned off the track, momentarily seemed to be swamped as riders hurtled past her.

Pendleton risked being boxed in but didn’t panic, finding exactly the wheel she needed – that of Meares herself, passing the Australian as they approached the line as if to through down the gauntlet for the battle ahead.

The pair would each win their Round 2 race to go through to the final along with Shuang, Lee, Clara Sanchez of France and Canada’s Monique Sullivan.

Great Britain were the last team out on the track and as early as the first lap, led out by Joanna Rowsell, they were well on track to qualify quickest. What's more, by the time the trio, Dani King and Laura Trott completing the team with Wendy Houvenaghel, completed the first 1,000 metres of the 3 kilometre ride, they were on target to beat their own world best time.

With coach Paul Manning giving them an indication of their progress from the trackside, they set a new world's best of 3:15:669, nearly four seconds quicker than the next fastest time of 3:19406, set by the USA.

The First Round and Finals both take place tomorrow and besides Great Britain and the USA, the other teams to qualify, in order of time set today, are Australia, Canada, New Zealand, the Netherlands, Germany and Belarus.