Lightweight 202 gets improved aerodynamics and stability and there's a new disc...
by Mat Brett

Zipp are extending the use of their Firecrest aero rim shape to cover their 202 model with the launch of a new clincher. They’re also releasing a Super-9 Carbon Clincher Disc which they claim is the fastest wheel in the world.

The 202 already exists as a tubular, non-Firecrest wheel but Zipp are now releasing a clincher version using their Firecrest shape.

In brief, the Firecrest shape is much broader than a traditional V-shape aero rim profile and it bulges less than other previous designs. The idea is that the shape works with the tyre to reduce drag not only at the first half of the wheel but on the rear half where the rim leads. Zipp also reckon the shape makes for increased stability by moving the centre of pressure – the focal point of side forces acting on the rim – close to the steering axis. Zipp say that the 202 Firecrest, with its 32mm rim depth, is more efficient than traditionally shaped wheels that are as deep as 66mm, and it’s faster than virtually every aero wheel of any depth from a decade ago.

They claim that it has virtually the same level of stiffness as a 45mm-deep 303 but it’s 150g lighter at 1,375g for the pair. The existing version has always been seen as a climber’s wheel and that lack of weight is likely to remain one of the chief selling points of the Firecrest 202.

When it comes to braking, Zipp are keen to point out that none of their carbon clinchers has ever suffered a heat-related failure and they say that handling won’t be a problem even in strong crosswinds. The low depth means that the 202 Firecrest has to put up with the least side force of all of Zipps carbon wheels and that the pressure from those forces that do exist focus close to the steering axis so you don’t get buffeted about.

“The 202 has become the new standard for handling,” said Zipp’s David Ripley at the Eurobike launch.

The 202 Firecrest Carbon Clincher will be available from October but there’s no tubular version yet. Zipp weren’t happy with the results they’ve got so far on that front although it wouldn’t surprise us to see one next year. The rider weight limit is 100kg.

Being a clincher, it’s obviously pretty easy for you to swap your tyres according to the road or weather conditions. 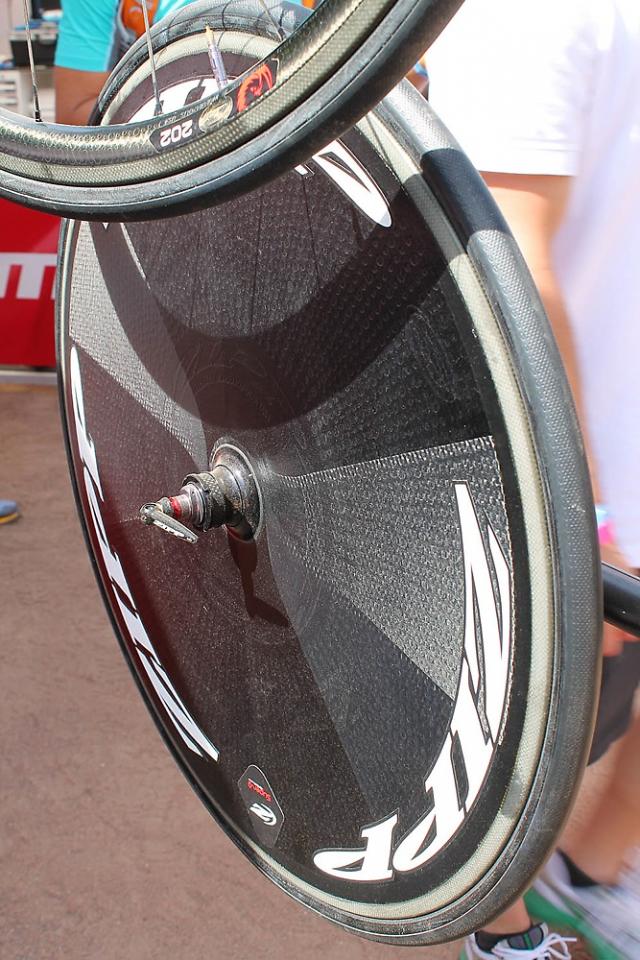 This is the wheel that Tony Martin of Germany rode to a silver medal in the time trial at the London Olympics a few weeks ago.

The Super-9 Carbon Clincher Disc will be 11-speed compatible and you’ll get a spacer with it for use with a 10-speed drivetrain. It will be available from November at £1,850.

It features the same unidirectional carbon shaft as before and an all-carbon clamp, and you adjust it via 2 titanium bolts. It comes in 27.2mm and 31.6mm diameters, weighs 175g (330mm) and will be available for £199.99 from October.