British brand Moda were at the Cycle Show over the weekend exhibiting their 2013 range which includes new models and major upgrades to the existing line-up, and also showing a prototype of a carbon monocoque frame that will be made in the UK.

First, that UK carbon monocoque… It is being made for Moda by Vekta Composites who mostly work in the automotive industry. This first prototype is a little rough and ready – the clearance around the rear wheel isn’t right, for example – but that’s often the way with prototypes; it's work in progress. The new model is a performance road bike with a sloping top tube, a seat tube that arcs around the rear wheel slightly, and neat-looking seatstays that run parallel to one another at the top.

We don’t have details on weight or anything like that yet because it’s still a few months away from being available, but it’s certainly interesting. We can’t think of an existing carbon monocoque that’s made in the UK (we mean where the frame is moulded in the UK, rather than the bike being built up over here, obviously). If you can, let us know in the comments below.

Moda don’t have a price sorted yet although they tell us that the idea is that it will be a realistic price rather than outrageously expensive… but what that means in terms of an actual figure is anyone’s guess right now.

We’ll try to get more details on this bike and the production and run a complete story soon. Moda are adding two completely new steel models to their range for 2013. First up, there’s the Intimo (main pic) which is made from Reynolds 953 ultra-high strength stainless steel. It looks great with a white finish apart from shiny stays and panels on the seat tube and down tube. The fork is high modulus carbon. The Intimo frameset is available in five sizes from 50cm to 58cm at £1,999. 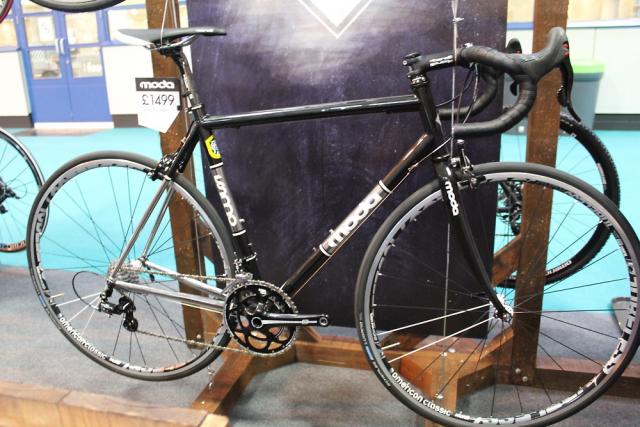 The Issimo is a similar design but it’s made from Reynolds 931 so it’s cheaper at £1,499. Both the Intimo and the Issimo are available as framesets only, rather than as complete bikes. Moda’s Finale top-end carbon road bike has a new frame for next year; they work on a two-year product cycle so this version will run until the end of 2014. There are many changes including a seat tube that’s now shaped around the leading edge of the rear wheel, a fork crown that sits inside a recessed head tube, and internal cabling.

The Finale is made from high modulus carbon and so is the fork, including the steerer. It’s Di2-compatible with a mount point for the battery on the non-driveside chainstay.

Interestingly, Moda say they can adjust the components to suit your budget. So, for example, if you can only run to £3,500, they could possibly downgrade a component or two in order to make the price.

The next-level-down Stretto has a new frame too and, like the Finale’s, it’s high modulus carbon. With a SRAM Force/Barelli groupset, it’s priced at £2,699. The £1,999 Molto gets last year’s Stretto frame – it has trickled down a level and got a new blue colour scheme. Again, it’s high modulus carbon fibre and so is the fork, although with an alloy steerer. All of Moda’s bikes come with American Classic wheels; in this case they’re Victory 30 alloy clinchers – the 30 referring to the rim depth in millimetres. The groupset is a mix of SRAM Rival and Barelli. The Moda Prima is worth a mention in that the frame is triple-butted 7005 aluminium with high-modulus carbon seatstays. A few years ago there were loads of alu/carbon frames about but we don’t see many anymore. The fork is carbon too. This one comes with a Shimano 105/Barelli group and is priced at £1,499. Moda have two £999 road bikes in the shape of the Rubato (yellow, above) and the Bolero (blue, below). They both come with double-butted 7005 aluminium frames and high modulus carbon forks, Microshift groupsets and American Classic Victory wheels. 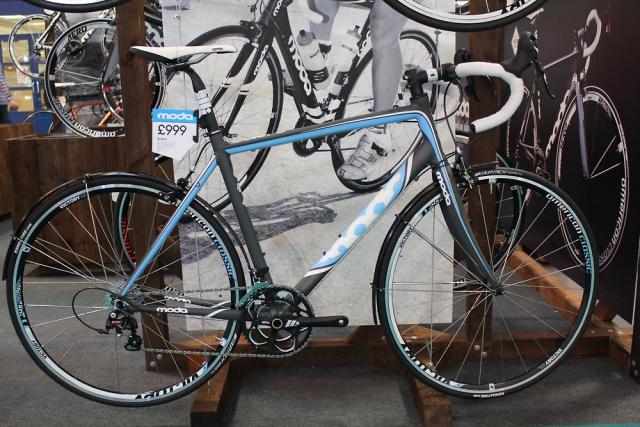 The main differences are that whereas the Rubato has a race geometry, the Bolero has a slightly higher front end, mudguards and rack mounts, so it’s more suited to life as an all-weather commuter.

There are many more models in the Moda range. Go to www.eurobike.uk.com for all the details.