New five-model line-up includes the lightest ever Arione, the 00, plus new R1 and R3 models
by Mat Brett

Fizik are releasing new versions of their Arione saddle for 2013, including the lightest ever model - the Arione 00, and we’re out in Italy at the moment checking them out.

The Arione has been around since… any guesses? 2002. Doesn’t time fly? And – interesting fact of the day – at 30cm long, it broke the UCI’s rules for racing at the time, so Fizik had to request (politely, of course) that the regulation was altered.

You’ll still be able to get the original model, and the CX version continues too, it’s just that they will be joined by three others next year: the 00, the R1 and the R3. As for the R2 – there isn’t one.

So, what's new about the 'new' Arione's design? Well if you look at our main picture (and the one below) you can see that while Fizik have retained a recognisable Arione shape there are some subtle changes. The three saddles in the main picture illustrate the evolution of the Arione - with the CX model in the middle, launched a couple of years ago, being the halfway house. The new models have a more padded nose, and that nose is also slightly wider and, to our eyes at least, very slightly longer - check out the side-by-side comparison shot. 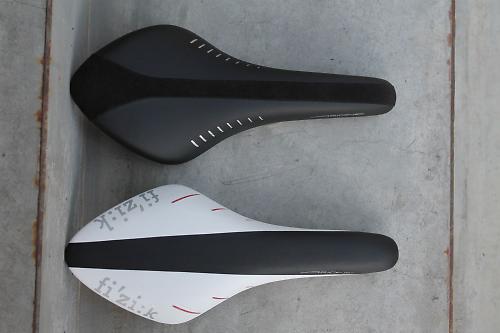 One reason the nose may look longer is that the Wing Flex portion of the saddle extends further down the nose than on the classic version, but it curves out more sharply into the rear section. The new Ariones are also less deep top to bottom than the original - the idea at the back at least being to make the Wing Flex flex even more and, of course, it helps drop some weight. The other big difference between the new and original Arione is in the methods of construction, and the materials used to make them… more on that in a mo.

The 00 is Fizik’s new super-duper lightweight Arione. They’ve changed the technology, the design, the feel, the construction… lots, then. But it’s still most certainly recognisable as an Arione.

How much does it weigh? 135g. That’s light. I mean, there are lighter saddles out there – especially if you’re willing to sacrifice comfort but, as Fizik are keen to point out, that’s not an option with the Arione. Their design brief was to shave off the grams where possible, but not to compromise on comfort.

The Arione 00’s shell is made from composite carbon and it incorporates Fizik’s Wing Flex technology – it flexes where your thighs contact it – and Twin Flex technology – it’s a double layer structure that allows a certain amount of movement, and then no more.

The Arione 00 sits on Mobius carbon braided rails while the cover is Microtex. It ain’t cheap, though. It’s light, Fizik have been busy with the technology, it’s carbon… it’s never going to be cheap. There’s no easy way to say it: it’ll set you back £299.99.

Mind you, Fizik reckon the 00 is designed for the pros and most of the rest of us should probably leave it to them and go for one of the models with more padding.

The R1 model is a whole £100 cheaper… okay, ‘less expensive’ if you insist. That’s £199.99, for the hard of understanding. What do you get this time around? The R1 is built on a carbon thermoplastic composite base that incorporates that same Wing Flex technology. Fizik actually went to the car industry for the materials technology. They cover that with what feels like generous amount of padding while down below the rails, like those of the Arione 00, are braided carbon.

The final new Arione is the R3 and, to give you the figures up front, it’s 185g and £129.99. Fizik reckon this one is the perfect mixture of comfort and performance… naturally enough. There’s not a massive difference between any of the Arione saddles in terms of profile – the R3 is almost the same as the 00. The biggest difference is that the R3 uses a fiberglass thermoplastic composite shell, again with Wing Flex technology. Wing Flex is a constant across the range – every Arione comes with that small amount of give as your legs come into contact with the saddle when you pedal.

This shell has more elasticity than you get with the 00 or the R1, and the R3 has a different type of foam too, so the idea is that you get a plusher feel. The rails are different too – they’re K:ium, which is the name Fizik give to the alloy they use.

This is the one they let me loose on today and it did the business. We did about three hours taking in a 1,000m climb and some fast descending on one of the skankiest surfaced roads in the whole of Italy. Verdict: it felt great: not to squidgy but still yielding enough to stay seated over the rough stuff without your voice rising an octave. One ride of three hours isn’t enough to say for sure that this saddle is a winner but I felt comfy throughout and came home feeling unshaken so that’s a good start.

We’re heading up the 1,775m Monte Grappa in the morning so I’ll try to get on board a different saddle then and let you know how they compare.

Details of the whole Arione range are already up on the Fizik site.

Speaking of grappa, Tony and I just had some. Don’t make the same mistake.