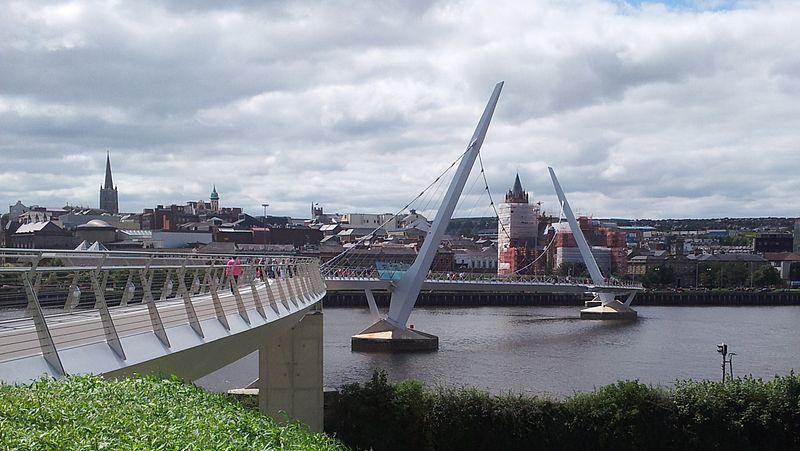 Ilex, the urban regeneration agency for Derry-Londonderry, has joined Sustrans in urging cyclists to cut their speed on the city’s iconic Peace Bridge, which spans the River Foyle.

The cycle and footbridge opened in 2011 and was built to improve links between predominantly unionist and nationalist areas on opposite sides of the river.

Quoted in the Londonderry Sentinel, Paul Doherty from Ilex said: “In recent weeks an increasing number of cyclists have been speeding over the Peace Bridge and through Ebrington. We’re seriously concerned about public safety and if cyclists don’t slow down, there could be an accident.

“The speed limit for all vehicles on these shared spaces is 5mph and we urge everyone to respect this when approaching and when passing over the Peace Bridge and Ebrington.

“On this, National Bike Week, we appeal for those cycling to be mindful of those on foot by slowing down, so that everyone can enjoy these much loved spaces.”

In recent weeks, Sustrans has urged cyclists to slow down on shared use paths at locations such as Ashton Court in Bristol, and on the Bristol-Bath Railway Path.

The sustainable transport charity’s area manager, Ross McGill, said: “We all have responsibility for the safety of others when we are sharing spaces. It’s important not to startle other people, particularly those who have reduced sight, hearing or mobility. The tranquillity of these areas is something people value greatly, and all path users need to respect this.

“Cyclists tend to be the fastest movers on these paths, but these routes aren’t suitable for high speeds so it’s important to keep cycling speed under control. Remember that they are for sharing, not for speeding. If you wish to travel quickly, train for fitness or record personal best times, this is better done on quiet roads.”

Historical divisions between the city's communities are reflected in the name used for it; those from traditionally unionist areas tend to use Londonderry - the city's legal name - whle people from nationalist ones favour Derry, and the local council is officially Derry City Council.

Those differences are reflected well beyond the city; news outlets in the Republic of Ireland, for example, favour Derry, which is also the name that appears on road signs towards it until the border is reached.

In recent years, one approach adopted to tackle the issue has been to use both names - Ilex's website, for example, uses Derry-Londonderry, as does the organisation co-ordinating events around the city's status as UK City of Culture 2013.