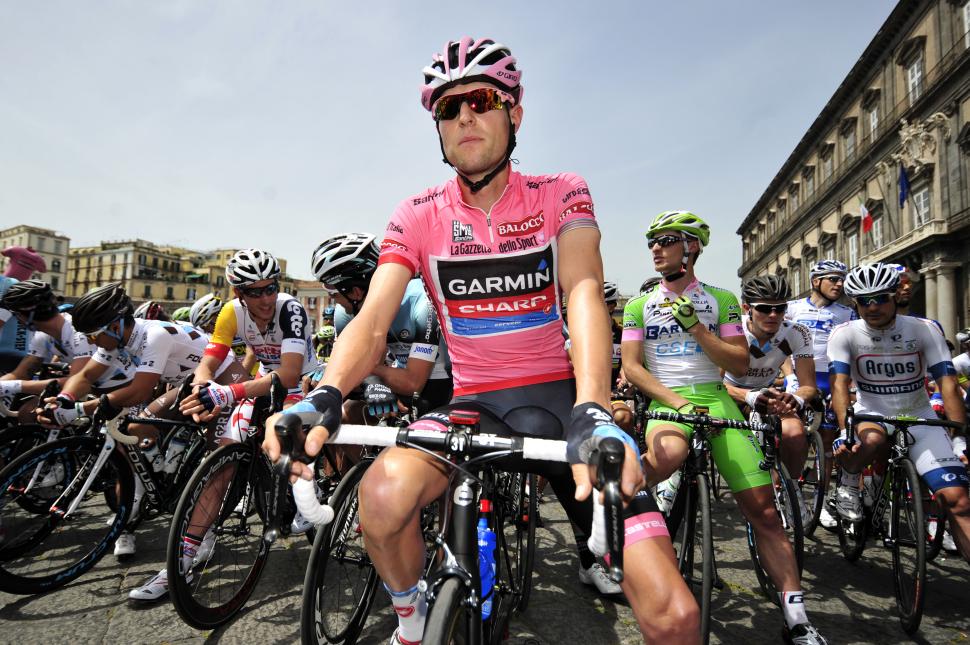 David Millar and Dan Martin among US team's nine-man line-up announced this afternoon...
by Simon_MacMichael

Former Giro d'Italia champion Ryder Hesjedal will ride the 100th edition of the Tour de France for Garmin-Sharp when the race starts on Corsica on Saturday.

The Canadian, whose defence of his Giro title was curtailed last month through illness and who crashed out of the Tour de Suisse a fortnight ago, will be joined by a strong team including Dan Martin, winner of Liege-Bastogne-Liege and the Tour of Catalonia this year, Tour stage winner David Millar, and the young American Andrew Talansky, second overall to Sky's Richie Porte at Paris-Nice.

The delay in announcing the team presumably is owed to waiting to gauge Hesjedal's fitness - following that Tour de Suisse crash, the tam confirmed that while nothing was broken, he had "suffered multiple, severe contusions and abrasions to the right wrist, hip and knee and left shoulder, elbow and knee." He was able to return to training last week.

The third rider from the team to be sanctioned following USADA's investigation into doping centred around the US Postal team, David Zabriskie, fails to make the cut, nor is there room for sprinter Tyler Farrar.

“We have a deep team with a lot of options as we head into the Centennial Tour de France," commented the team's CEO, Jonathan Vaugters. "Our goal is to animate the race and with an aggressive strategy, we will aim to place high in the general classification.”

“We have a few guys capable of achieving that – Ryder’s won a Grand Tour and placed in the top 10 of the Tour de France; Andrew is young and while it's his first Tour de France, he is coming off a great season; and Dan Martin is having a breakout year with his wins in Catalunya and Liege-Baston-Liege.

"We will protect our best GC options and see how the race shakes out," Vaughters went on.

"Our approach is a little unconventional, but we’ve managed to come up with surprises every year at the Tour and we’re hoping for the same as we head into Corsica.”

Directeur sportif Charly Wegelius added: “We have a good mix of guys with a lot of experience combined with young riders competing in their first Tour de France.

“We have options when it comes to general classification and we also have riders who are capable of stage wins, so we’ll be looking for those opportunities as well. It’s going to be an exciting three weeks.”