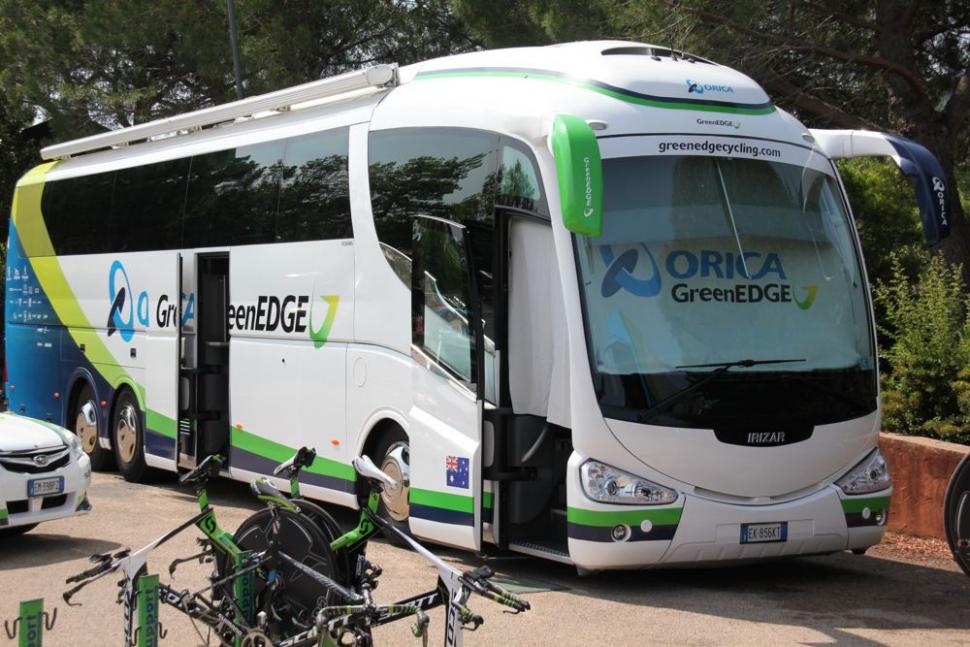 After the Busgate debacle in Corsica, we decide to have a team bus shootout
by Mat Brett

The Orica GreenEdge bus made a little bit of Tour history earlier today when it got wedged under the finish line arch in Corsica, leading to all sorts of confusion. Busgate, we’re calling it. That gives us all the excuse we need for a team bus shootout.

Before we get started, I’d just like to relate a little tale to you... I got a message from editor Tony this afternoon saying, “Did you take a pic of the Orica GreenEdge bus in Corsica? It has made the news”.

“A bus, you say? One of those things you told me to stop shooting the other day?”

“You told me to stop wasting time taking pictures of buses and to do some proper work.”

“And now you want a picture of one of the buses?”

“So you’re probably sorry that you said that now?”

Just saying. Anyway, team buses: they’re buses and they belong to the teams. And here they are in all their glory… 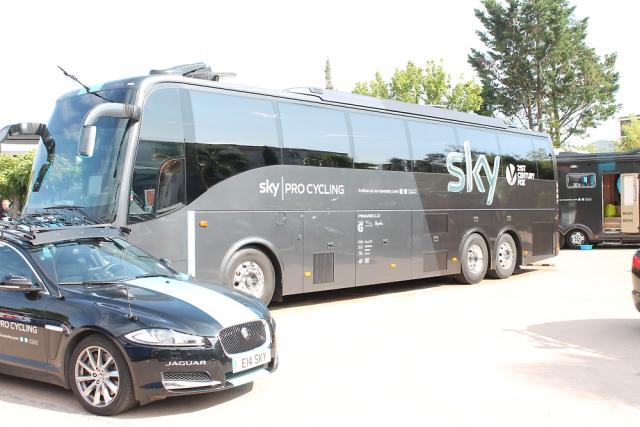 We ran a story, including a video, earlier in the year on the Team Sky bus that’s the envy of the peloton. The riders spend loads of time on board so they have all sorts of comforts to keep them, um, comfortable – swivelly chairs, showers, a sound system, cinema, swimming pool… Okay, not a swimming pool, but you’d be amazed at what they have in the bus that they’ve nicknamed the Death Star.

As well as housing all mod cons, Team Sky’s bus leads the way in the looks depart. It’s sleek, stylish and understated, a lot like their Rapha team clothing. We’re giving it extra cred for the double axle at the back that just looks a bit more pro. 9/10 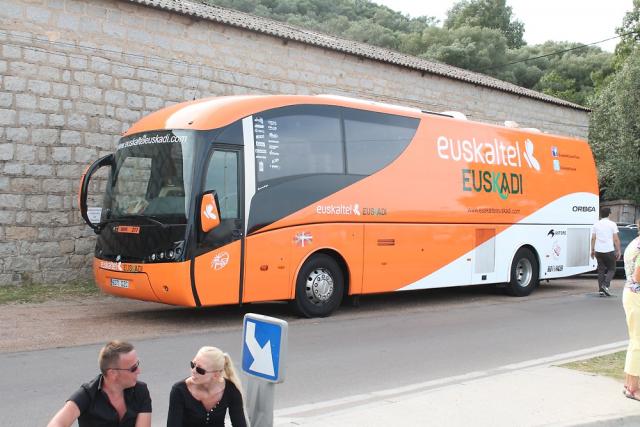 "Did you know that there’s no Basque translation for the word 'subtle' or for the phrase 'too much orange'?"

Points for being distinctive, though, because that’s half the battle. 6/10 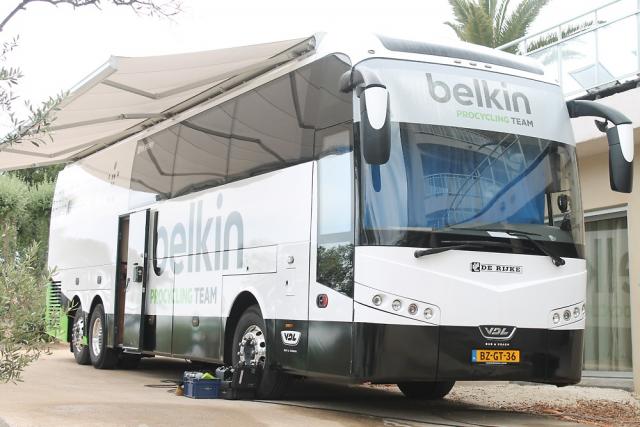 There’s a fine line between understated and boring. Sorry, but this one just doesn’t do it for us. Interestingly, they’ve gone for a VDL bus rather than a MAN like most other teams. No, you’re right, that was an incorrect use of the word ‘interestingly’. Points off for being dull, points back on for having to cope with a mid-season team name change. 5/10 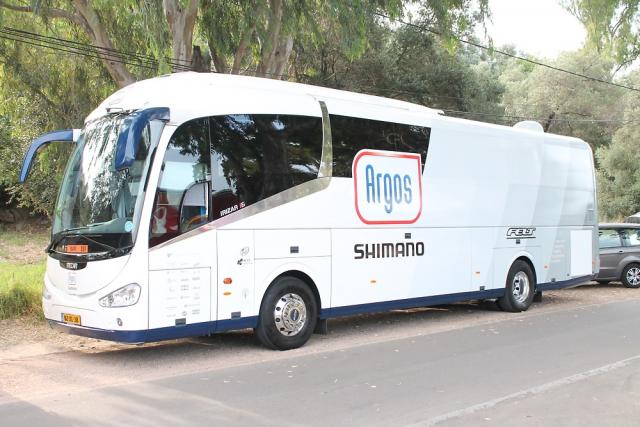 Argos-Shimano pick up a couple points for having the bus that looks most like a caterpillar. Obviously, that’s a good thing. We’re not rating the graphics highly though – they’re a bit boring. Nice blue edging around the bottom though, but could do better. 6/10 Second coolest looking bus, we’re saying, belongs to Radioshack Leopard Trek. Neat colours. We’re taking a point off for over-prominent use of their Facebook and Twitter presence. It’s a bit needy, in our opinion. 8/10 The Cofidis bus looks like a 1990s throwback to us. Nothing too offensive here but it needs a refresh. It wouldn't surprise us one bit if that's what that bloke is saying to his wife. The world of team buses is a competitive one. If you don’t keep up, you’re going to get trampled underfoot. By the way, is anyone taking charge of that pushchair? 4/10 Now, we like Europcar’s classy Colnago bikes and we even had a Europcar hire car in Corsica, but green buses are for pensioners only, sorry. 3/10 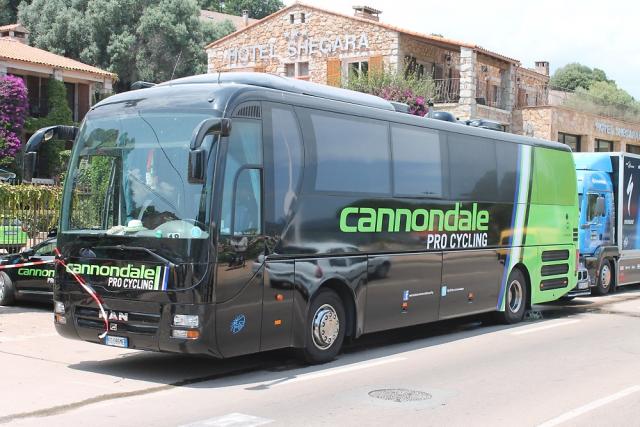 Hang on a sec, though, Cannondale’s bus has a lot of green on it and it manages to look pretty cool. The difference is that this is green and black, like the chocolate. And like the chocolate, it’s pretty tasty, organic and made with Fairtrade-certified cocoa beans. Okay, the analogy breaks down towards the end there but the point remains.

If you 've never heard of Green & Black’s chocolate, that last bit will have been wasted on you. Don’t worry about it. It was nonsense anyway. 7/10 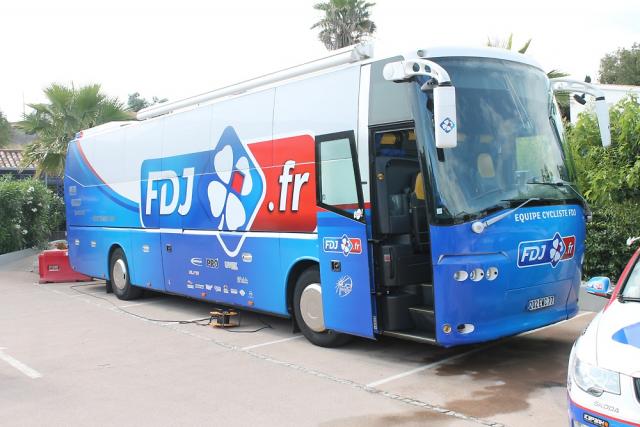 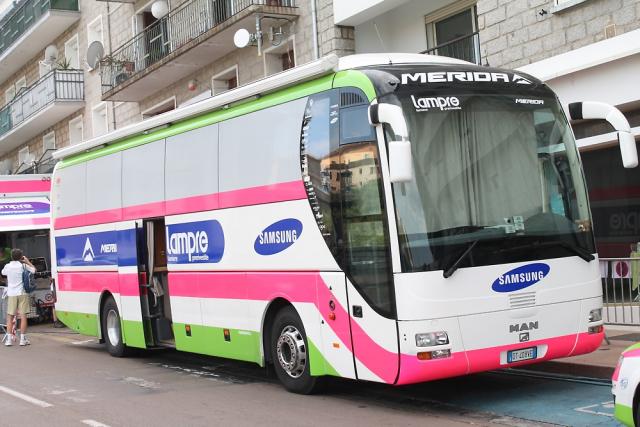 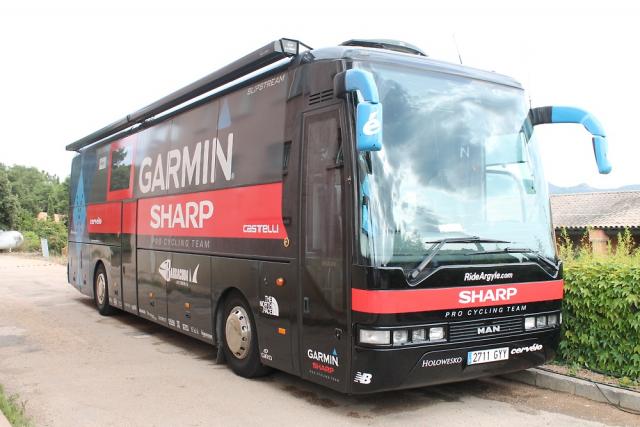 Yeah, it’s not bad, but if you’re going to do the argyle thing, you have to commit to it – see road.cc jerseys for details. Slinging that single diamond on the back makes it look like an afterthought. Bonus point for the Cervélo é logo on the wing mirrors though. Nice touch. 7/10 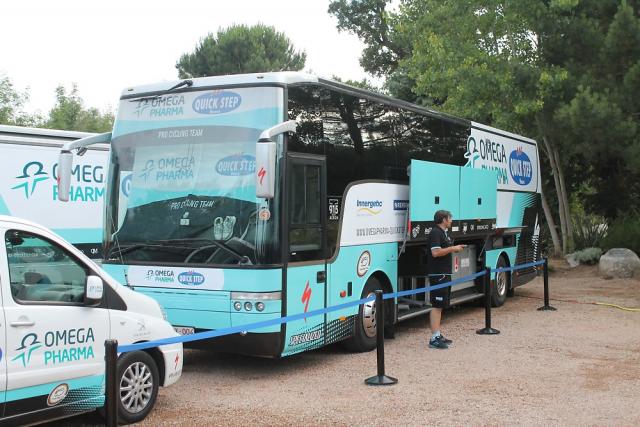 Mid-table at best. We’re awarding an extra point for using team issue barrier tape and revoking that same point for those shoes drying behind the windscreen. Sorry, but we can’t tolerate shoddiness. Team Sky wouldn’t do that. 5/10 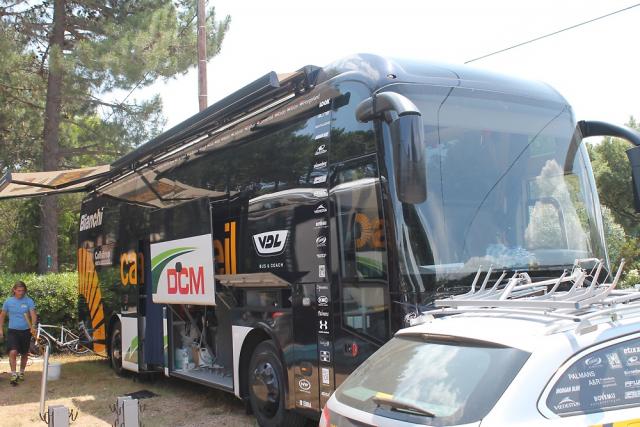 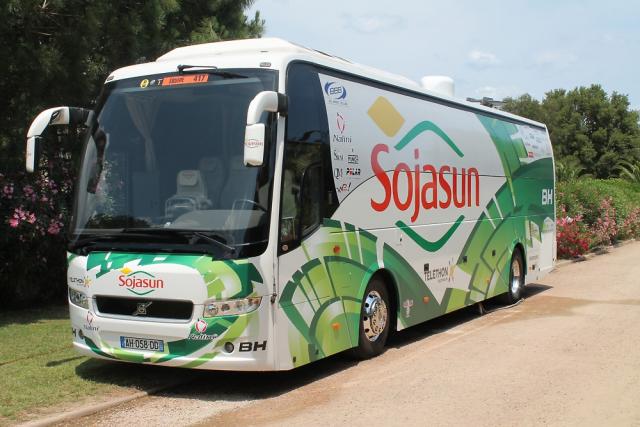 We don’t like to be harsh but what the hell is going on here? Sojasun are going to have to step up their bus-designing game if they want to become a World Tour team, rather than just getting in as a wild card. 2/10 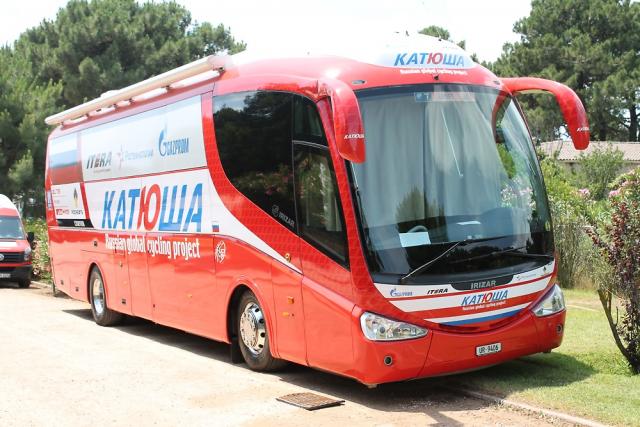 Red buses should be double deckers, possibly with Cliff Richard leading a singalong up top or Frank Spencer hanging off the back on rollerskates. Grudgingly, we’d have to admit that even though they’ve neglected these basics, Katusha’s bus still looks pretty neat. 7/10 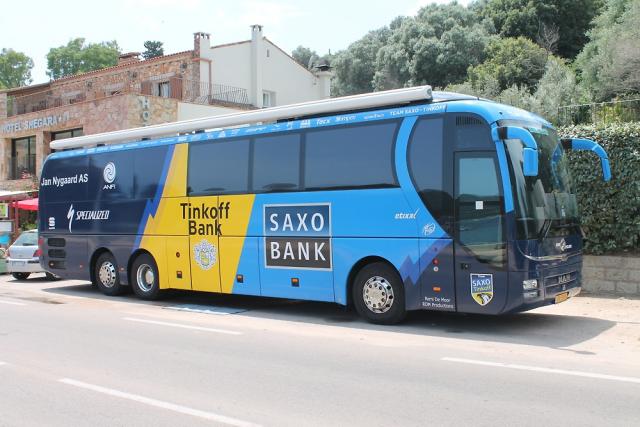 We’ve got no strong feelings on this one. It looks uncluttered but that’s because most of the sponsors’ logos are pretty much invisible along the top. That’s not good if you’re one of those sponsors. 6/10 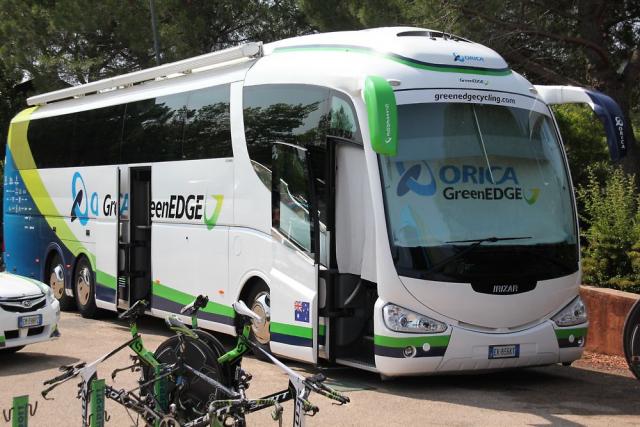 It was doing so well with a double axle and non-matching wing mirrors that are kind of quirky. It even looks like it has been lowered, although the evidence from the finish line says otherwise.

However, in the light of recent events, we’re not giving this bus any points. What’s that you say? “It wasn’t their fault the finish line was built too low.” Well, you might be right but Orica GreenEdge are going to have to go through a lengthy appeals process if they want us to reconsider and there’s a lot of paperwork involved. Plus, there’s always the chance that they’ll end up on a negative score. 0/10 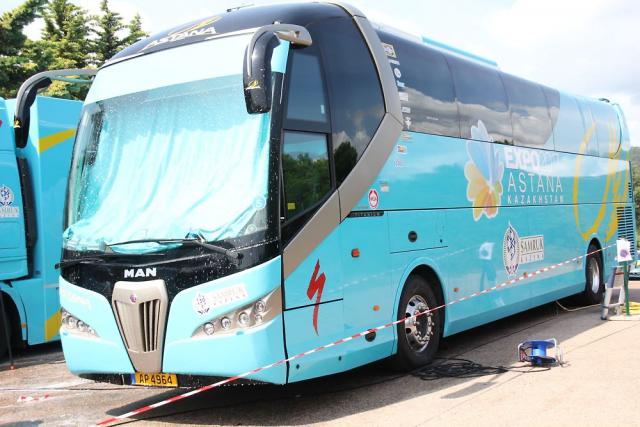 Cool colour. For that reason alone, 8/10

Regrettably, Movistar, Lotto Belisol, BMC and AG2R-La Mondiale don’t get a rating because either their buses were out when we went visiting their hotels or, more likely, we just forgot to photograph them. They’ll be devastated when they hear about this.