Autumn is looming on the horizon but rather than focusing on that, here are a few of the key items from next year’s Castelli range. 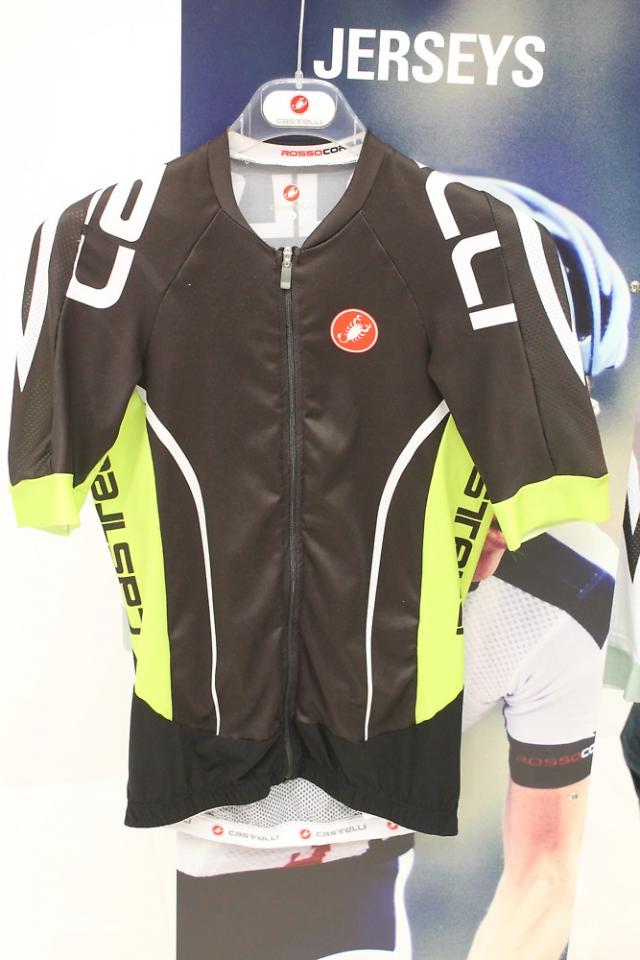 First up, this is the Aero Race 5.0 jersey which, as the name implies, is designed to be aerodynamically efficient. Castelli work on the fit, seam placement and the fabrics to make this jersey slip through the air with the minimum of drag. The 2014 model has a super-stretchy waist section, for example, a bit like a cummerbund, to draw it in close, prevent the pockets from gaping, and to avoid any flapping. Castelli reckon that the current 4.0 version of the Aero Race jersey is about 12 watts more efficient than a normal race-fit jersey at 40kph whereas this 5.0 model offers a 20-watt saving, according to their figures. The neck dips down lower than before at the front and that scorpion logo on the chest will actually be printed on the arm. It gets stretched out of shape where it is here. Castelli say that the Aero Race 5.0 will be even lighter than their superlight Climber’s Jersey, which is 91g. 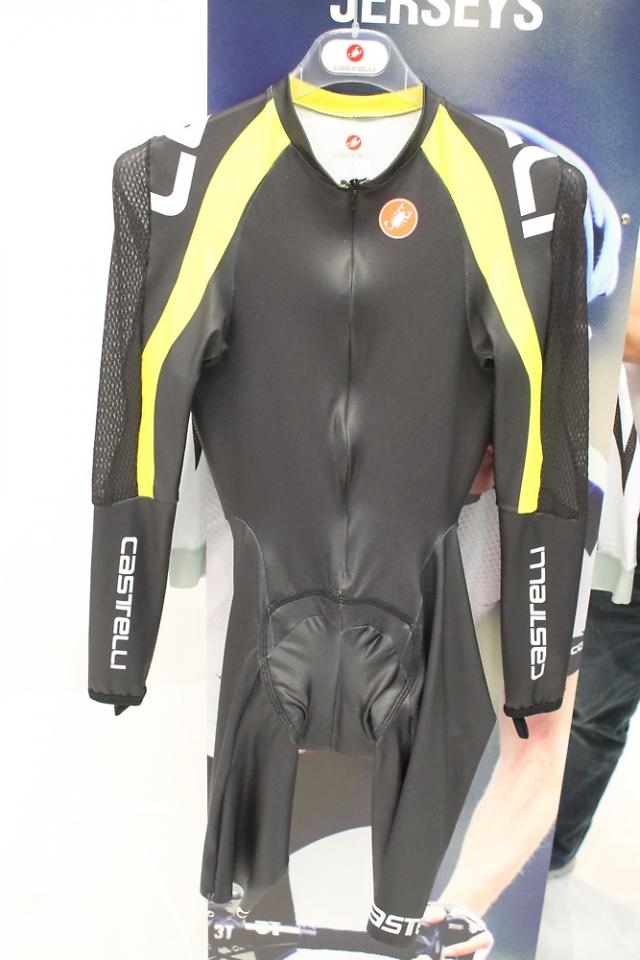 The Aero Race Speedsuit 3.0 is another piece designed with aerodynamics in mind. It comes with a full-length front zip, and the shorts section comes from Castelli’s Body Paint lineup. Thumb loops hold the sleeves in place while the back is designed to be highly breathable. That flap where the pockets would otherwise be is for pinning your race number to. The success of the Sanremo Speed Suit – we love it here – has persuaded Castelli to produce a Velocissimo version that should be more accessible in terms of price. This one is likely to be £160, which is a little cheaper than buying the top and the shorts separately.

The Velocissimo Sanremo will use similar high stretch/low tension fabrics to the existing version, but in a cut that’s a little less extreme. The shorts section is the Velocissimo design. This is the updated Sanremo 3.0 (above). This is the new Aero Speed glove. As you can see, rather than having separate fingers, the body of the glove extends down to cover your second, third and fourth fingers, like a mitten. The idea is to reduce turbulence. The index finger is separate so you control the levers.

The extended wrist section is intended to act as a diffuser. Castelli reckon that this design is eight watts more efficient than a standard glove. Castelli have some innovative-looking triathlon kit in their Free Tri range. Two part tri suits, for example, feature micro clip hooks that join the top and shorts together for the swim and bike, but which can be opened up when you want more freedom of movement and ventilation for the run. This is essentially a triathlon version of the Sanremo, the top and shorts being joined together at the back but not at the front. It’s available with and without sleeves. The fabrics are designed to dry superfast while the pockets are side entry to avoid catching the wind. Unusually, Castelli are launching triathlon-specific bib shorts for 2014 with a slimmer than normal pad. These are meant for training rather than racing, and feature those microclip hooks so you can attach a triathlon suit top securely in place.

We’ll bring you news of Castelli’s autumn/winter collection when we go to visit UK distributor Saddleback next week.