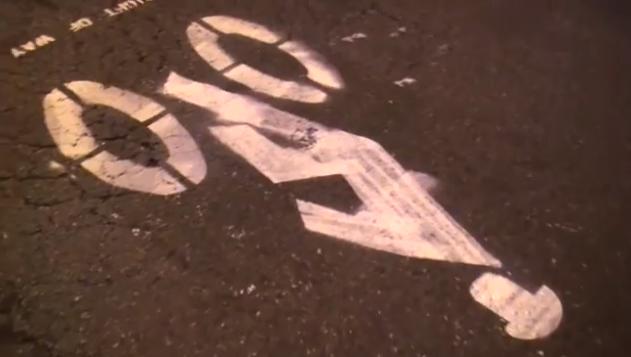 A vigilante cyclist group in New York has attempted to reclaim the streets by stencilling ‘cycle lanes’ and the words ‘right of way’ on the roads.

The group, calling themselves Right of Way, is better known for creating memorial ‘ghost bikes’ as tribute to killed cyclists. But following an incident last month in which a tourist’s leg was torn off by a cab that was involved in an altercation with a cyclist, Right of Way have upped the ante.

They took to the streets armed with white spray paint and stencils to create a sectioned off area just for cyclists along 6th Avenue between 42nd Street and Central Park.

According to Gothamist, “Sixth Avenue through Midtown is among the city's most congested, nightmarish streets for cyclists”. Asked whether the newly painted ‘bike lanes’ might lull riders into a false sense of security about their position on the roadway, Right of Way co-founder Keegan Stephan said: "It's really just bringing out the law of the road that already exists.

"It's been proven time and time again that if you install a bike lane, it lowers the number of crashes.”

It’s not yet clear whether the Department of Transportation will remove the painted lanes.

The action is reminiscent of that of activists in Seattle, who dubbing themselves the Reasonably Polite campaign group, in a bid to show how much safer the streets could be, stuck plastic reflective poles along a lane in Cherry Street, making it both more visible and harder for vehicles to stray into.

They attached the poles using removable adhesive, making it easier for the police to remove them - which they duly did. However the police did attempt to reunite the group with their poles.