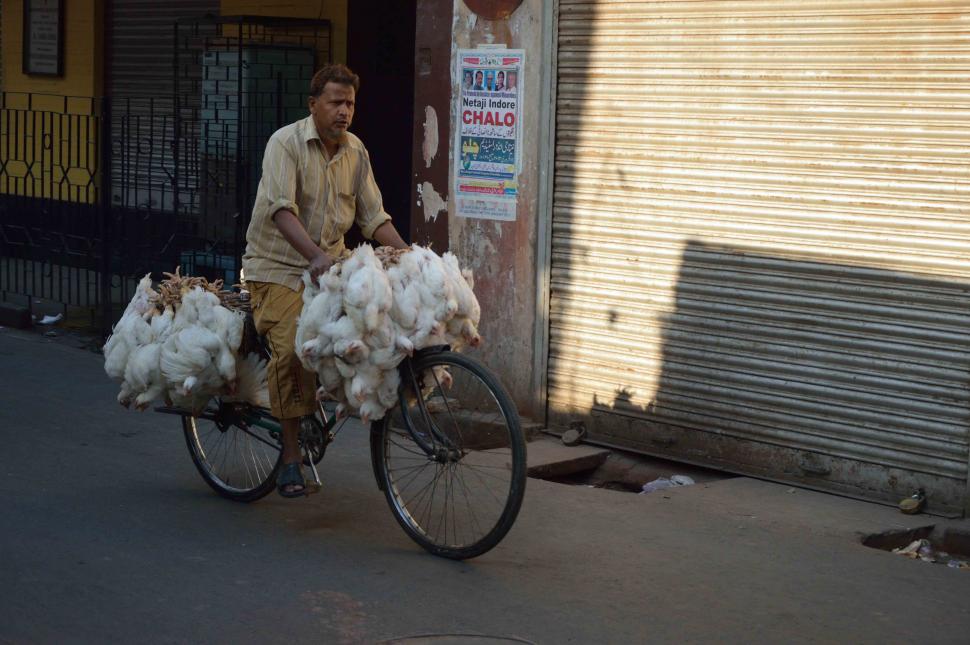 Cyclists, many of whom rely on bicycles for their livelihood, protest action
by Simon_MacMichael

An Indian city where more journeys are made by bicycle than by car has made the surprising move of extending a ban on bicycles to almost 200 major streets during the day.

Calcutta, home to 14 million people and with more than 2.5 million trips made by bicycle every day, has banned them, along with hand carts, tricycles and other non-motorised vehicles, from 175 key streets.

The reason? Police say there is too much traffic, and these forms of transport have slowed city speeds down to as little as 8mph, compared with a national average of 13mph.

Some 38 streets have had cycle bans since 2008, but this summer nearly 140 more were hit with banning orders between 7am and 11pm.

"There is just not enough space for all kind of vehicles," Dilip Kumar Adak, deputy commissioner of the city's traffic police department, told the BBC.

"Cycles slow down traffic and removing them will make the streets safer and traffic speedier."It's not a blanket ban. People can still cycle on smaller streets."

The law has been an unwelcome development for the city’s cycling community, most of whom ride bikes because they have no other affordable mode of transport.

Police have begun fining cyclists on main roads, and repeat offenders have been warned that they risk having their bikes confiscated.

“Cycling is banned in major thoroughfares of the city for two reasons,” K. Hari Rajan, the additional commissioner (traffic) of Calcutta police, told Telegraph India at the time of the original ban in 2008.

“To ensure that traffic flow is not disturbed by the mix of fast-moving vehicles and cycles, as Calcutta has no provision for dedicated cycling tracks. There are also security concerns as cycles are often used to plant bombs,” he said.

"The new laws are crazy," said Gautam Shroff from the group Ride 2 Breathe.

“Pollution is increasing every day here so we should be encouraging people to take up cycling".

"Instead we are punishing them for helping improve the environment."

"If cyclists are a nuisance, so then are pedestrians, motorcycle riders and car drivers. Why does the government not take them off the roads?”

Last month, around 200 riders took to the streets to protest the clampdown in a a ‘cycle satyagraha’ [the latter word, coined by Mahatma Gandhi, translates as "insistence on truth" or "soul force," and underpinned his campaign for Indian independence from Britain; the concept would also be embraced by Nelson Mandela and Martin Luther King.]

One of the protesters, Prashanta Purakayit, told Down To Earth that as a cyclist, he was “regularly showered with abuses, cycle tyres are punctured with knives, and materials on the carrier thrown away.”

A petition presented to the Chief Minister, Mamata Bannerjee, written by the social activist Medha Patkar pleaded for the ban to be revoked.

It reads: “Cycle is a perfect manifestation of your slogan and vision - since bicycles and non-motorized transport are socially inclusive, directly support livelihoods, are inexpensive, take much less space, are good for the environment and health, and are least likely to cause jams and accidents.”

In addition, data from the Union Ministry of Urban Development show that Kolkata is the only metropolitan city in India where trips by cycle (11 per cent) outnumber trips by cars (8 per cent).

One protester, Raju Sapui, who rides a bike to his job as a driver, because he cannot afford to drive, is defiant.

"This is making my life very difficult . Every time I get on my cycle I am scared that I will be fined as I have to break the law and go on some of the banned roads to get to work,.

"I will continue to use my cycle until the authorities take it from me. If they want me to stop riding, maybe they should buy me a car.”