483g chainset is one of the very lightest production chainsets currently available, we get our hands on one
by David Arthur @davearthur

When you lift the Hollowgram SiSL2 chainset out of the box, nothing quite prepares you for how little it weighs. The oversized crankarms convey a sense of purpose and the 10 arm chainring design, apparently inspired by race car wheels, lends the crankset a delicate presence. But it’s the lack of weight that takes your breathe away.

Cannondale have been developing their own chainsets since the early 1990s, when the iconic Coda chainset (designed by Magic Motorcycles) first appeared. It had CNC machined hollow arms and chainrings with a proprietary bottom bracket. They’ve been evolving the design ever since, and this latest incarnation is their lightest yet.

At 483g, there are few chainsets as light as this. That’s the claimed weight for a compact chainset, including the axle and all spacers. We’ve just had the chainset arrive in the office sans axle and spacers, and the weight on the road.cc scales is 439g. Obviously the axle, which is lighter as well thanks to extra machining, is going to add a bit of weight and take it up close to the claimed weight. 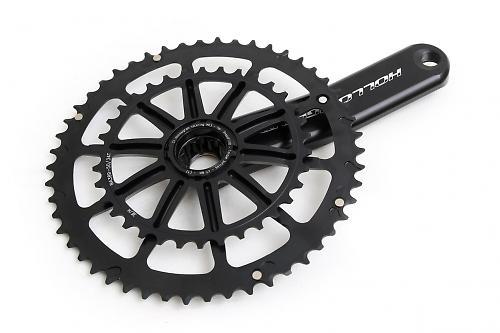 To see how they place against the main top-end chainset options currently available, a Dura-Ace is a claimed 553g, Campagnolo Super Record 584g and a SRAM Red 557g. Placed in that context, the Cannondale chainset is impressively light.

To make the crankset they first CNC machine the arms as two separate pieces, then bond  them together, creating a hollow crank arm. You can see the split between the two halves running along the sides, and the interlocking steps at each end. Next, instead of a conventional spider attaching the chainrings to the crankarms, Cannondale made the spider and chainrings from one piece of metal, and called it One Piece Integration (OPI). That really saves a lot of weight and contributes to the stiffness, according to Cannondale 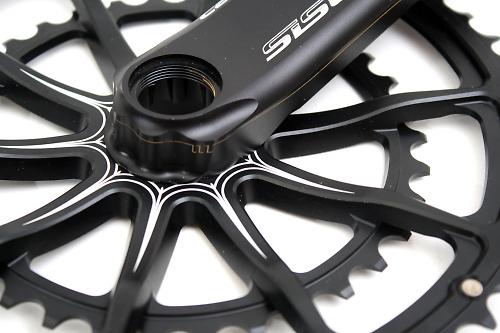 In a highly labour intensive process, the two chainrings are first 3D forged then machined from the same billet of aluminium. The 10 arm design was inspired by the wheels on high performance race cars, which Cannondale say is a design that offers a very high level of stiffness by distributing the forces more evenly than other cranks. Not seen here, but a key part of the crankset, is the new axle. It’s also been put on a diet so it’s lighter than before.

The 10 arm design is also said to improve shifting as there’s no flex in the chainring when shifting under power compared to four or five arm designs. There are pins and ramps on the back of the large chainring which Cannondale told us gives shifting on a par with that from most competitors, save for Shimano Dura-Ace which they say is slightly better. But Dura-Ace has a weight penalty over Cannondale’s chainset. 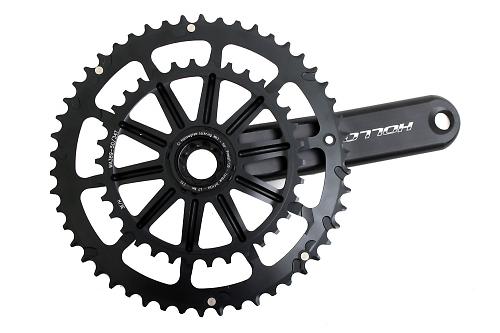 And how much does such lightness cost you? The SiSL2 crankset costs £629.99 and you’ll have to shell out another £169.99 for the axle, bearing and shim kit. The cranks are compatible with previous Cannondale Hollowgram axles though if you’re looking to upgrade, you obviously don’t need the bearing kit.

Now, as much as we want to ride them, we unfortunately have to box them back up and send them back to Cannondale. They've made a very nice paperweight this week while they've been here though.