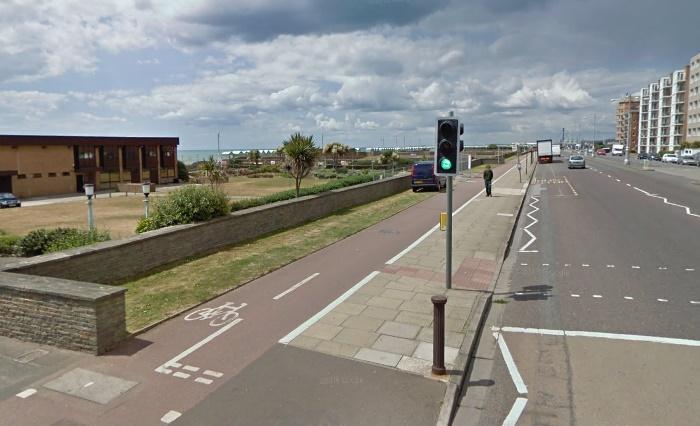 Sussex Police have closed an investigation into an incident on a Hove shared-use path in which a cyclist was knocked face-first into a wall. Agnieszka Merta, who had been riding with her son on her bike at the time, said that the man responsible didn’t stop afterwards and instead told her, “I need to go”.

At around 1pm on December 30, Merta was riding on the shared-use path that runs along Kingsway near Hove Lagoon.

“I was cycling slowly as I had the little one on the back of the bike,” she told The Argus.

“Then I felt a push from behind and couldn’t really remember much. It was with a lot of force as he went past on my left hand side, trying to overtake me. I don’t remember it exactly, but my mouth hit the low brick wall and I suffered concussion.

“The first thing I wanted to see was if my son was hurt. Luckily he did not even have a scratch. I was trying to face a different direction so my son didn’t have to see that I was covered in blood.

“The man was in his early 30s and quite tall. I think he was scared that I would call the police and scared he would then have to face some consequences. He said, ‘I need to go’.

“I think his riding was very dangerous.”

Merta needed 20 stitches and subsequently underwent £350 worth of dental treatment.

A letter from Sussex Police indicates the incident was treated as an alleged assault occasioning actual bodily harm. However, the case has now been closed unless new information comes to light.

One resident who came to Merta’s aid told her they had witnessed numerous crashes and collisions between cyclists and pedestrians on that stretch of shared-use path.

“It is absolutely crazy there, something needs to be done as it is dangerous,” said Merta.

“I really hate the thought of something like this happening to someone else, particularly if it is happening regularly.”