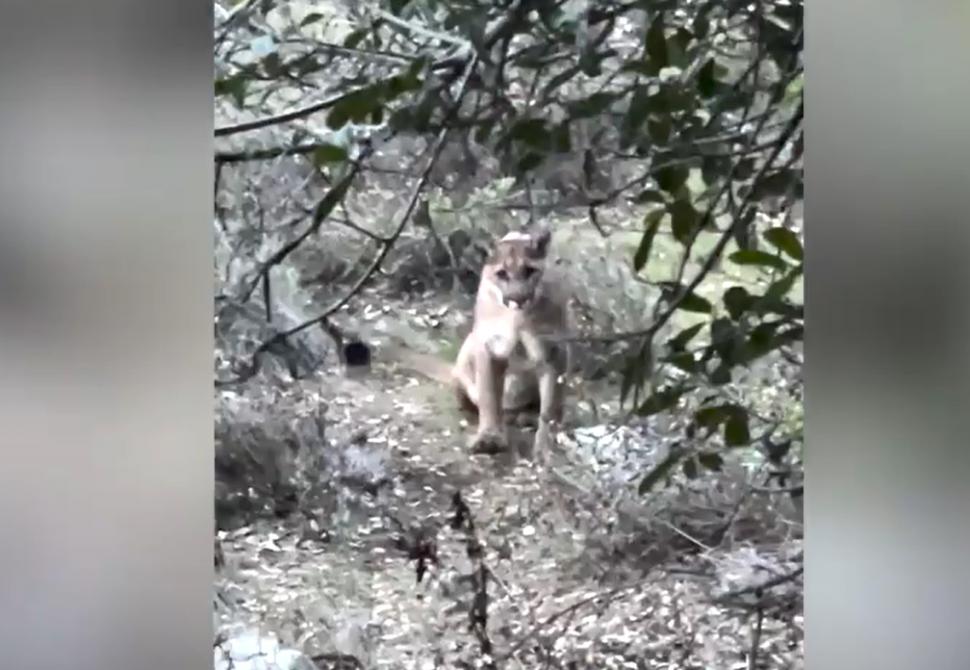 “I saw this cat run towards me”: Californian mountain biker survives stand-off with cougar (includes video)

“I jumped off the bike and put the bike between me and the cat, and just started screaming as loud as I could at it”
by Ryan Mallon

While hazardous rocks and protruding branches comprise the most pressing safety concerns for the majority of off-road enthusiasts in the UK, things are a bit different across the Atlantic, where a cyclist in California suffered an almighty scare at the weekend after coming face-to-face with a cougar that had strayed onto a popular trail.

Rex Hatter, an experienced mountain biker from San Luis Obispo, was cycling through the Irish Hills Natural Reserve on Saturday afternoon when he was approached by a distressed hiker running up the trail, the San Luis Obispo Tribune reports.

“She started waving at me all frantically, started talking all freaked out that she had just seen a mountain lion,” Hatter told the local newspaper.

After accompanying the frightened hiker off the trail, the cyclist then turned back up the mountain to return to his car, parked around five miles away.

However, just 90 seconds into his return leg, Hatter said he began to hear loud noises emanating from the brook next to the trail – where a cougar, also known as a mountain lion, began to approach him at speed.

“I looked over and I saw this cat run toward me,” the cyclist said. “The thing I’ve always heard was that you don’t run away from them. If you run away, you’re gonna get their instinct going to chase you.

“So, I jumped off the bike and put the bike between me and the cat and just started screaming as loud as I could at it.”

Raising his bike above his head, Hatter managed to scare away the animal, which retreated to a safer distance. As the clip above shows, the cyclist continued to stare and shout at the cougar, while also scanning the area for rocks or a sharp stick which could be used for protection.

He continued: “I was afraid to turn my back on him, and I was thinking the last thing I want to do is lose sight of him, because then I’ll be out here in the world just wondering where he is, giving him a chance to sneak up on me.”

The mountain biker was able to contact local police officers, who eventually escorted him from the trail and to safety. Hatter said the gun-carrying officers made loud noises and kept eye contact with the cougar until they were out of sight.

The San Luis Obispo Tribune reported that the cyclist’s close encounter is the second time a mountain lion has been spotted in the local area in as many weeks, with the San Luis Obispo Parks and Recreation Department moving on Sunday to close the Irish Hills Natural Reserve and Johnson Ranch open spaces near Prefumo Canyon following the sightings.

“I’d hate to see them hurt the animal, but maybe they could relocate it,” Hatter told the paper.

> Cougar mauls cyclist to death in northwestern US

While serious incidents involving cougars, the second-largest cat in the Americas, are thankfully rare, they have been known to attack cyclists.

In 2018 a cyclist was mauled to death and another seriously injured in a cougar attack in Washington state, in what was only the second human death caused by a cougar in the state during the past century.

32-year-old SJ Brooks, a former bike shop employee and cycling activist from Seattle, was riding with his friend Isaac Sederbaum on dirt tracks near North Bend when the pair became aware that a cougar was following them.

They scared it off, but shortly afterwards it returned and pounced on Sederbaum, with Captain Alan Myers from the Washington Department of Fish and Wildlife describing how the big cat “had his head in his jaws and was shaking him violently”.

At that point, Brooks dropped his bike and ran off into the woods, which appears to have triggered the cougar’s chase instinct.

After Sederbaum, despite his injuries, rode for two miles to summon help, the animal was later tracked down and discovered standing over the rider’s dead body, and was shot dead.