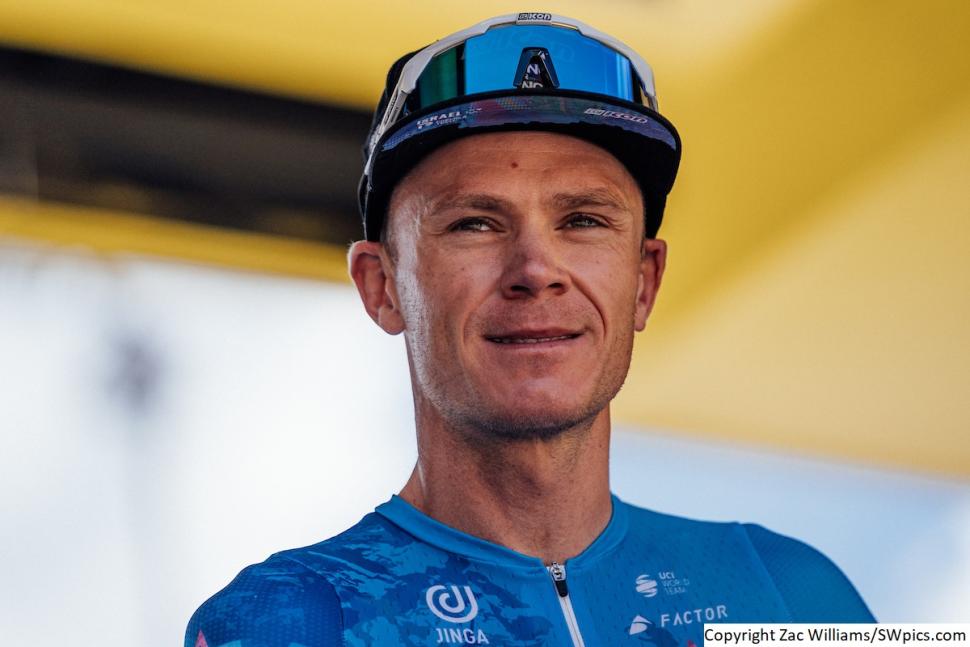 Chris Froome has revealed that he was the victim of a dooring while returning home from a training ride yesterday, sustaining minor injuries in the crash – and has advised drivers to learn the Dutch Reach technique, which aims to minimise the possibility of such incidents happening.

The 37-year-old Israel Premier Tech rider broke the news of his crash in a video on TikTok, appearing with a bandage on his left elbow, and according to VeloNews he also sustained a grazed hip during the incident, which happened shortly before he was due to arrive at his home in Monaco at the end of the ride.

“Yesterday I went out for a lovely Sunday ride,” he said. “It was stunning, lovely weather, stunning views but just before I got home, 50 metres before my front door, I got doored.

“That means as I was riding along someone in a parked car opened their door right in front of me. It was literally a metre in front of me. I didn’t even make it to my brakes. I hit the door and went flying over.”

The four-time Tour de France champion then spoke about the Dutch Reach technique, which from January this year forms part of the advice to road users in Great Britain under the Highway Code.

> Highway Code changes: what is the Dutch Reach and will drivers be fined £1,000 if they don’t use it?

“I've just got one piece of advice for anyone getting out of their vehicle,” Froome said.

“It's called the Dutch Reach. Instead of opening the door with the hand that’s closest to the door, use your opposite hand so you naturally turn your body in that way,” he explained.

“You get to see if there’s any traffic coming or most importantly, any bikes coming. So, use the Dutch Reach. It’s extremely helpful and causes a lot less pain to our cyclists and it’s a very simple thing for you guys to do.”

It’s not the first time that Froome, who has struggled to recapture top form following his horrific crash at the 2019 Criterium du Dauphiné, has crashed due to the actions of a motorist while training on the Côte d'Azur.

In May 2017, a couple of months before he took his fourth overall victory at the Tour de France, he tweeted that he had been “rammed on purpose by an impatient driver who followed me onto the pavement,” with the then Team Sky rider adding that while he was uninjured, his Pinarello bike was written off.

A number of people commenting on the video Froome posted to TikTok today suggested that cyclists should ensure they ride sufficiently far away from parked vehicles to avoid the risk of being doored.

In response to one who asked him, “Are you not supposed to give room for an opening door?” Froome replied: “Not always possible when the road is narrow and cars are passing.”

Another wrote: “Ride at least 4 ft away from parked cars......then get abused by drivers for ‘taking the lane’. You can’t win, it’s why I tend towards MTB these days.”