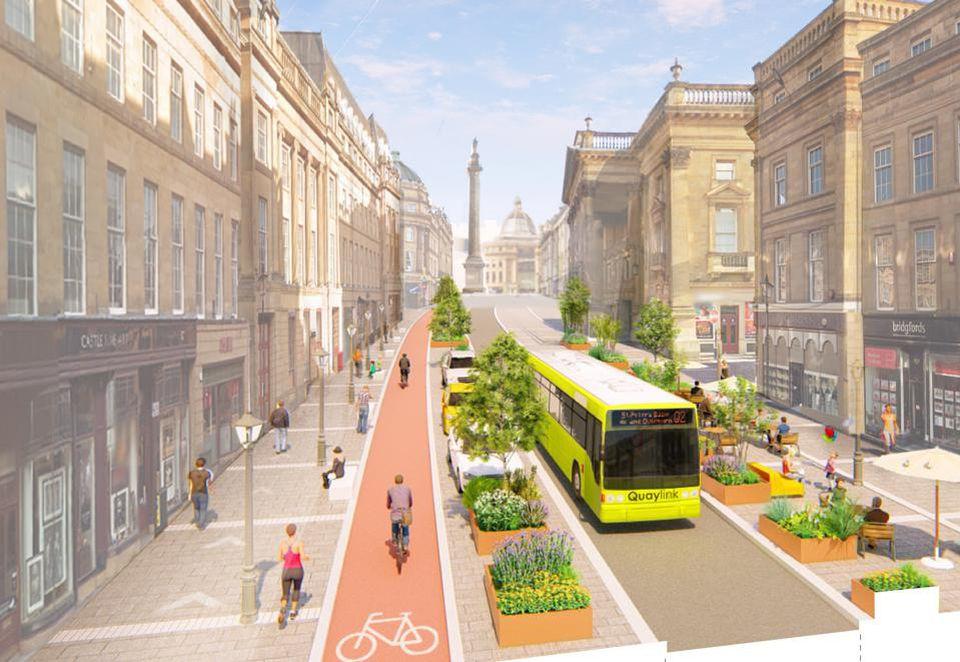 A cycle lane on a street widely considered to be one of the most beautiful in the UK, and which has in the past topped such lists, is set to be removed following a decision by Newcastle City Council.

In 2020, space on Grey Street, world famous for its Georgian architecture, was given over to cyclists and pedestrians under emergency measures (the picture above is from a separate visualisation) introduced in response to the coronavirus pandemic.

The council has now unveiled a planned £50 million revamp of the city centre which among other things aims to remove motor traffic from Grey Street – but bikes, too, with the northbound cycle lane running up from the River Tyne being scrapped under the proposals, reports Chronicle Live.

The plans have dismayed cycling campaigners, who say that people on bikes will either need to dismount and push their bicycles up the hill, or use a more dangerous alternative route that is choked with motor vehicles.

Newcastle Cycling Campaign’s Sally Watson described the plans as “unexpected and disheartening” and called on the council to reconsider them and design a “world class street that caters for both walking and cycling.”

She also said that the proposals could see the government try and claw back the £2.5 million it had given the council under the emergency Active Travel Fund.

Another campaigner, Lindsey Davey of SPACE for Gosforth, said: “The original plans and artists’ impressions for Grey Street were really exciting, with additional greenery, space for walking, pavement cafés and, importantly, a protected cycle lane for those heading up the hill from the Quayside.

“We were saddened to see that the new plans have removed this important cycle route, leaving no safe way for people to get from the Quayside to the city centre by bike.

“Given the number of people cycling along the Quayside’s national cycle routes, it’s a shame that our city council doesn't value enabling these people, including women and children, to visit one of Britain’s favourite streets.”

On its website, the council says that Grey Street “Will become the hub for cultural events and performance and ultimately become the primary pedestrian route between the city centre and Quayside.”

A Newcastle City Council spokesperson said: “The current layout on Grey Street is a temporary arrangement that was put in place in response to the pandemic and the need to create more space for social distancing, active travel and pavement areas for bars and cafes.

“We have been monitoring the impact of these temporary measures and liaising with local businesses in order to develop a permanent design for the street.

“Providing safe space for cycling in our city remains a priority and our programmes of investment in the city centre and local neighbourhoods clearly shows that.

“While we only completed the informal consultation about potential permanent changes on Friday, the feedback we’ve been given by people with various different viewpoints has been very helpful and will inform the final plan for this iconic street that will be advertised as soon as possible,” they added.

The plans were criticised by Tay Pitman of the Newcastle Green Party, who said that the council’s proposals were more a “vanity project instead of an integral part of cutting air pollution and meeting our climate change obligations.

“Expecting people on bikes to brave four lanes of traffic on Mosley Street or to get off and push up Grey Street isn’t in keeping with a vision for 21st century low-carbon transport in our city,” she added.