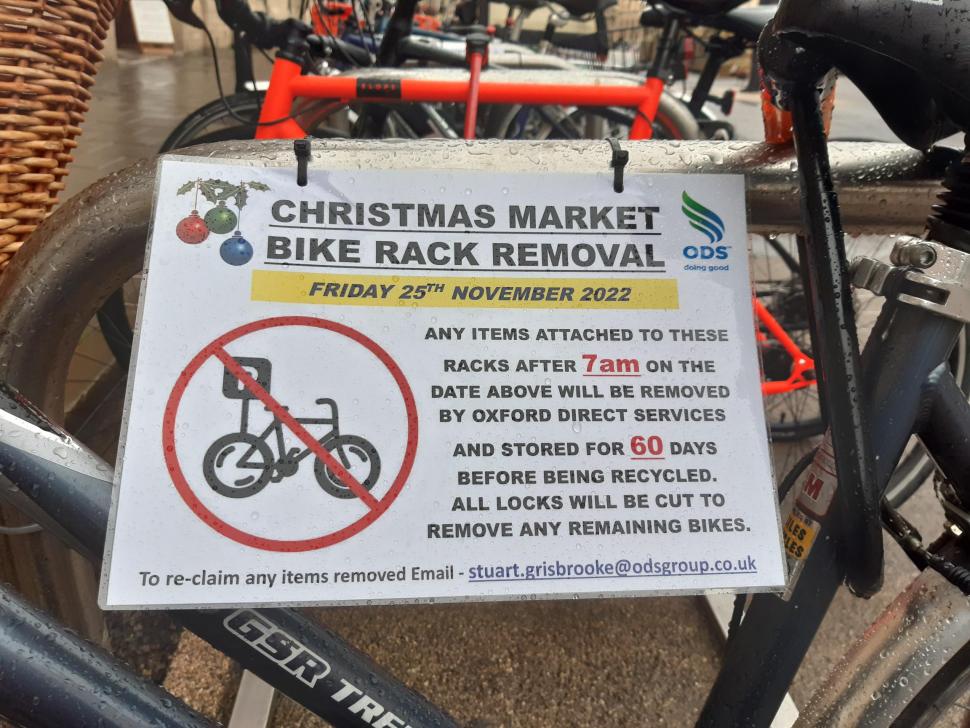 Cyclists in Oxford have been left "disappointed" as the council warns any bikes still locked on Friday will be removed too...
by Dan Alexander

Cyclists in Oxford hoping to attend the city's Christmas market by bike have been left disappointed after the council announced bike racks near the site will be temporarily removed during the festive event.

Oxford City Council placed warning signs on the racks at the west end of Broad Street notifying users that the bike parking facility, along with any bicycles or locks left after 7am on Friday 25 November, will be removed. Bikes unclaimed after 60 days will be recycled.

The Oxford Mail reports the racks are to be removed so market stalls can be set up ahead of the event's opening next Thursday (December 1) and will be reinstated once the event has finished on December 18.

Oxford Christmas Market is back for another year of festive fun 🎁✨!

To prepare for this, ODS will temporarily remove the bike racks at the west end of Broad Street from Friday 25 November.

Signs have been put up this week to let people know ahead of this happening. pic.twitter.com/pKHKQoNHoM

However, some local riders expressed disappointment at the decision and suggested the council should be encouraging people to attend the market by bike, not deterring their visit by removing a place to lock their bicycle.

Cycling campaign group Cyclox added a double dose of bad news, revealing that the cycle route along Broad Street will also be closed for the duration of the event.

It will, however, remain open next year.

Because contract with the Christmas market was agreed before car parking removal was confirmed, the cycle route will be closed. But this will be the last time that happens. Next year the market will spread across the length of Broad St and the cycle route will remain open.

One local rider said the decision to remove the bike racks was a "real shame".

Another asked: "Why are you removing bike parking? That's how many visitors and money spenders get there and it's all working just fine with the current Victorian Market using the whole length of the street. Please don't block the west end again."

A spokesperson from the council said: "Oxford Christmas Market is back for another year of festive fun.

"To prepare for this, Oxford Direct Services will temporarily remove the bike racks at the west end of Broad Street from Friday. Signs have been put up this week to let people know ahead of this happening."