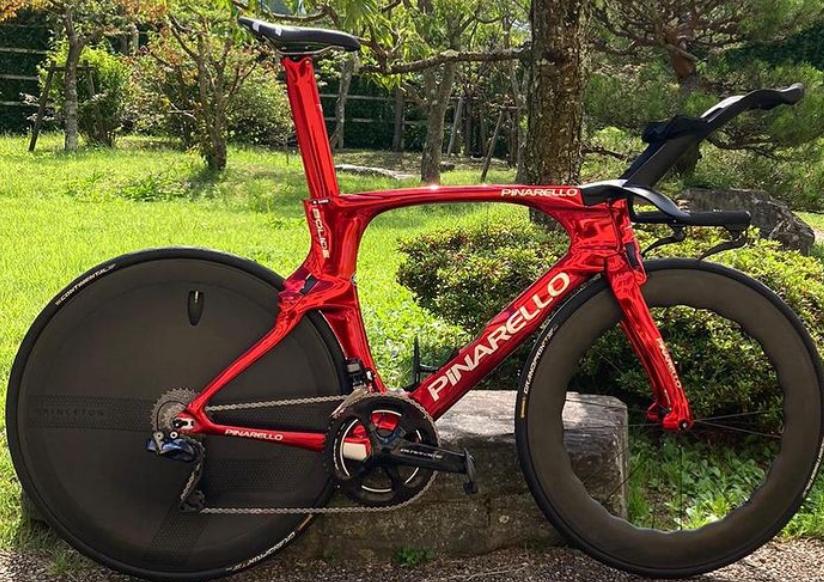 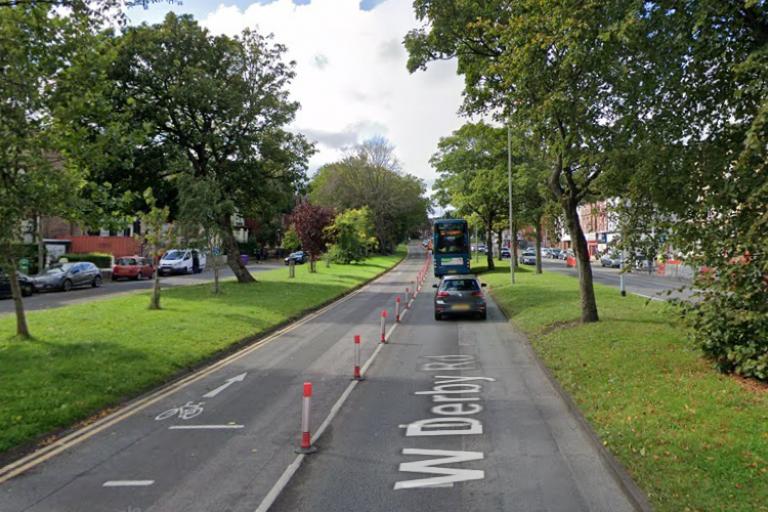 #BikeIsBest says “deeply worrying” development calls into question council’s commitment to tackling climate change
26
27 July 2021, 14:40
Boris Johnson announces those convicted of anti-social behaviour will be "out there in one of those fluorescent-jacketed chain gangs"

"I don't see any reason why you shouldn't be out there in one of those fluorescent-jacketed chain gangs visibly paying your debt to society".

You can tell you're a cyclist when you read Sky News and your first instinct is the PM has ordered people convicted of anti-social behaviour to get their cleats ready..."out there in one of those fluorescent-jacketed chain gangs visibly paying your debt to society" sounds like a pretty cool punishment to us. Come on, mate, don't skip your turn. Start paying your debt to society...

Rohan Dennis to win gold? Patrick Bevin a dark horse for a medal? Alex Dowsett has given us the goods with this TT preview detailing everything you need to know ahead of the two big races tomorrow...Including rumours of a tropical storm...

Well, well, well. Riding a machine like this beauty is a pretty nice perk of the job when you're as fast as Filippo Ganna. The Italian powerhouse will be gunning, or should I say Gannaing, for an Olympic gold medal to go with his rainbow jersey, in the early hours of tomorrow morning over in Tokyo.

The Ineos Grenadier has been near unbeatable for the past couple of years in races against the clock, racking up five Giro d'Italia stage wins in the discipline and melting cycling fans' brains globally with his thermonuclear wattages. And, if gold medals were won on style alone, the imposing Italian thrashing this piece of Pinarello perfection would earn a place on the top step of the podium with ease. If anything, it's a shame that the glossy red paint job will have to be replaced by a fresh gold look...Alright, I'll stop getting ahead of myself...

To win, Ganna will have to beat Tour de France conqueror Wout van Aert, Ineos teammate Rohan Dennis and well, almost every other great time trialist from across the world. We can't wait... 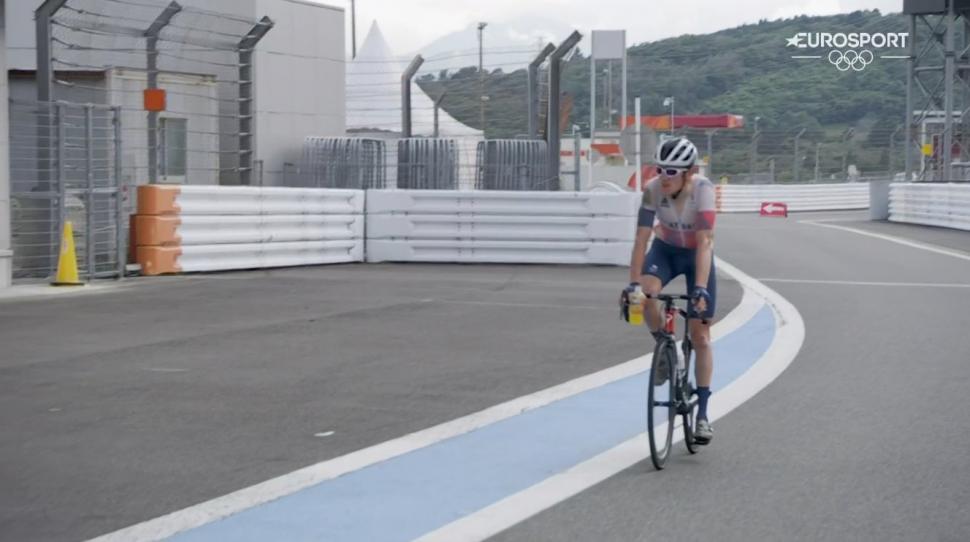 Geraint Thomas has spoken to Eurosport ahead of tomorrow's time trial and promised to give "one more push" to challenge for a third Olympic medal of his career. Thomas won gold in the Team Pursuit in 2008 and 2012 but crashed out of Saturday's road race after teammate Tao Geoghegan Hart fell ahead of the Welshman.

"We were just going down a fast bit of road, there was a little bit of metal in the middle and Tao hit that and lost his front wheel and I was directly behind him," G told Eurosport.

"I could have tried to land on top of him – it would have cushioned my blow. But yeah, we were both on the deck and really unfortunate – just a freak accident. I knew I wasn’t bad, like broken something, but when you hit the floor at that sort of speed it’s never nice. I knocked myself about a bit, just a normal crash but it’s just disappointing. After the Tour and everything, looking to come here, change of scene and with the GB team I was really motivated to try and get something out of it.

"It's not that I’ve had a bad season. I've won two races, I’ve been up there on the podium a few other times as well as that. But the main two targets is what you dream about and they’re the ones where I’ve ended up on the floor so it is tough but it is part of the sport. Like life in general, you don’t always get what you deserve. You just need to keep trying.

"This year has been tough mentally but I’ve still got one more chance on Wednesday with the TT so I’ll just rest up now and hopefully get something out of that. One more push, at least stay on the bike."

Misfortune and crashes have shadowed Thomas throughout his career, including at the Tour de France earlier this month where the 2018 winner dislocated his shoulder in a fall on stage three. He will roll down the start ramp as one of the two British riders competing in tomorrow morning's TT. Geoghegan Hart is the other to take on the course against a stacked line-up, including world champ Filippo Ganna, Wout van Aert and Rohan Dennis...

Eyewitnesses News out of the fucking bike lane pic.twitter.com/le9WjD58QC

ITT medal hopeful Anna van der Breggen is the latest Dutch rider to suffer Olympic misfortune after she was stopped by an official while training ahead of tomorrow's competition. Wielerflits reports the official caused Van der Breggen to fall, although other sources have disputed this.

The current TT world champ appears to be uninjured after the incident at the Fuji Speedway circuit. Japanese cycling coach Kyosuke Takei told the Dutch outlet: "Everyone had to stop due to a mistake by the organiser. And in the tumult with the guards, Anna was threatened and overthrown."

Geraint Thomas also reported problems with practising on the TT course. In a slightly cryptic tweet, the GB rider wrote: "Come recon the TT from 15:00-17:00 they said..." before following up with a second post saying he hadn't crashed, just that "it was a little chaotic."

Cyclist sprayed with bleach by robber attempting to steal his bike 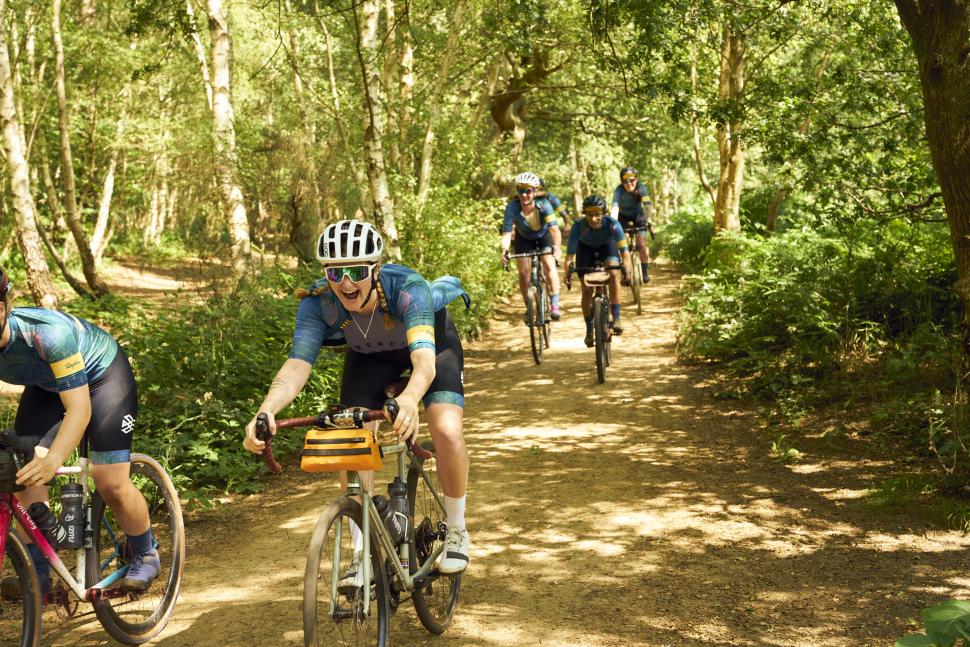 Rapha's celebration of women's cycling, the Rapha Women's 100, is returning this September for a ninth edition. Since its inception in 2013, the Women's 100 has inspired thousands of cyclists to come together and ride 100km on the same day. Back again after Covid restrictions, the ninth edition will see group rides hosted from Rapha's Clubhouses and partner cafes across the world, from Down Under to San Fransisco. Full details and sign-up information will be announced soon...

National 12 Hour Champion in 2020, Christina Mackenzie (Stirling Bike Club) will start her second attempt on the End to End record this Wednesday (28th July) at 0800. Her first attempt in 2019 was close to record pace until the Helmsdale climb with about 50 miles to go. pic.twitter.com/qNInFrHgvW

Christina Mackenzie is back for another attempt at the Land's End to John O'Groats record this week. Back in 2019, the national 12-hour champ was within touching distance of beating the current best time of 52 hours, 45 minutes, set in 2002 by Lynne Taylor. That time Mackenzie faded at the end to finish two hours, 30 minutes off Taylor's time, but she's back in the South West to have another shot at the 19-year-old record tomorrow. All the best, Christina.

Italy's pursuit of gold medals in Tokyo has led them to lean on the expertise of Russian manufacturer Thor3D's 3D scanning tech to reduce aero drag. The team has put its Pinarello bikes and Hardskin clothing under detailed analysis by the 3D technology to digitalise each athlete and reduce their drag as much as possible by optimising riders' equipment and position.

3D Natives reports the process involved riders being scanned while riding in their race position and wearing their full race kit, and was complete in two minutes. From the pictures and data, Pinarello designed custom-made bars for each rider and optimise their positioning. Because Filippo Ganna clearly needs extra help destroying the rest of the world... 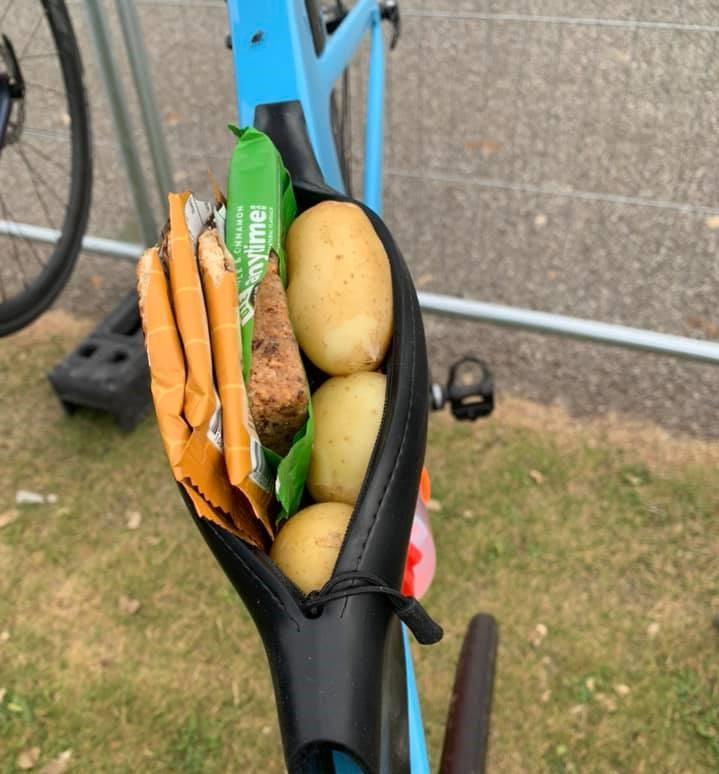 Gels and bars stuck to the top tube? Fine, we've seen it before. French bikepackers bundling baguettes back in their pockets? All good. Pizza slices taped to the top tube? That's a new one...and as for raw potatoes packed into a pouch for a crunchy mid-ride snack...Louise Short snapped these unconventional nutrition strategies on triathletes' bikes at the Outlaw event in Nottingham at the weekend. 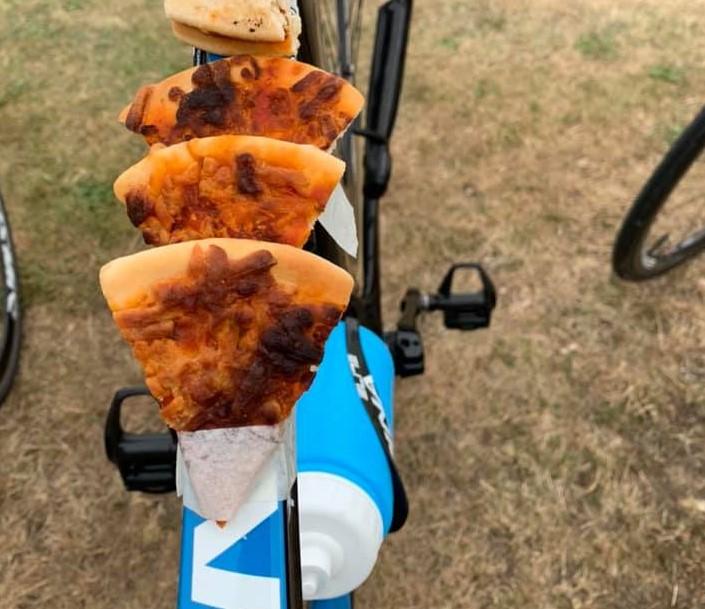 This Soreen malt loaf looks so sticky it doesn't need any help securing itself, although that top tube will need a good scrub later. Apparently the crows were loving the generously provided buffet while the athletes were in the water for the swim... 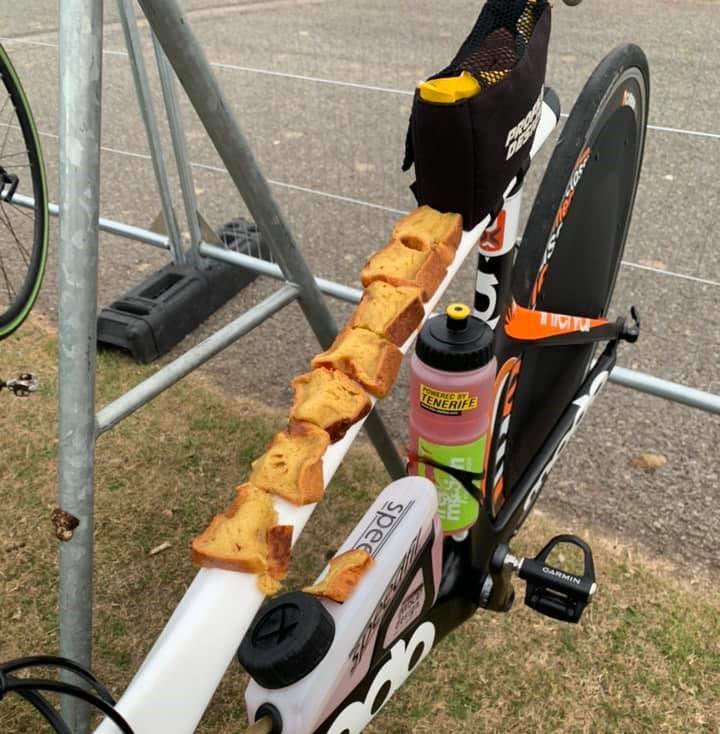 Ash Van Bassman won the comments section: "I assume for Kona, pizza bike triathlete adds pineapple to make it a Hawaiian?" Although based on some of the anti-pineapple comments from Friday's live blog, that joke probably won't land here... 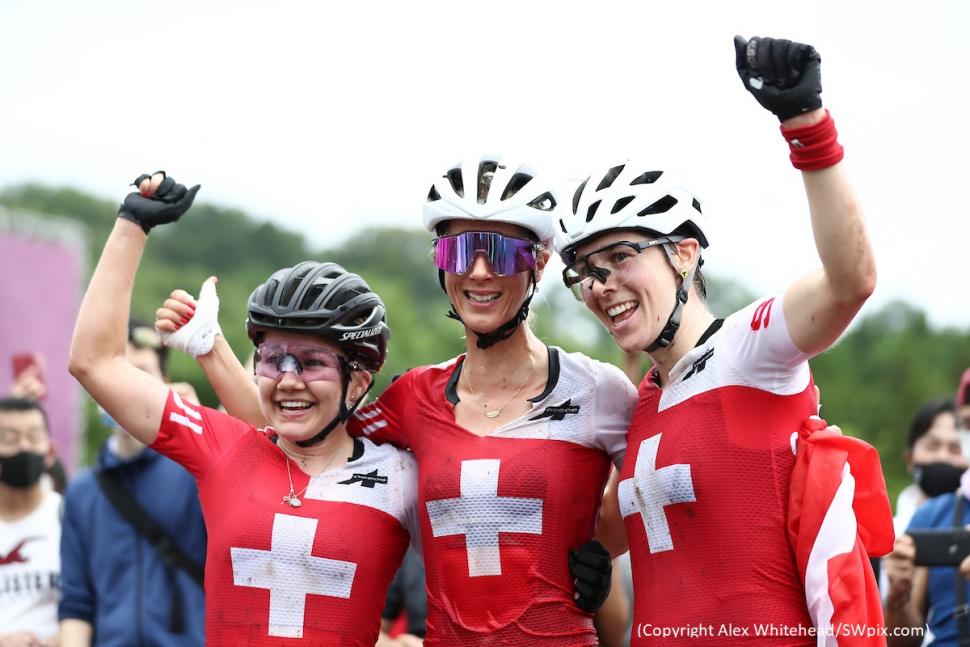 Switzerland have taken a clean sweep of the medals at the women’s mountain biking event in Tokyo, with five-time world champion Jolanda Neff taking gold, more than a minute ahead of runner-up Sina Frei and with Linda Indergand third. Team GB’s Evie Richards finished seventh, 3:23 after the winner.

Jumbo-Visma have put their kit from the Tour de France up for auction to raise money for Jeugdfonds Sport & Cultuur, a charity which helps children from less privileged backgrounds participate in sport. The standout item is one of Wout van Aert's skinsuits used during the Tour. You'll need a large wallet though...with five days to go the bidding is already up to €1,800 (plus a nine per cent fee).

Second on GC, Jonas Vingegaard's jersey is also up for auction and is up to €1,300, at the time of writing. Cruelly, you can also bid for one of Primoz Roglic's skinsuits he wore during his punishing first week, possibly with crash holes included...

In fact, if you want anything it'll cost you...Mike Teunissen's signed bottle is the cheapest item going...and it's still €65. No word on if the UCI will take action against the Dutch leadout man for lobbing a bidon to a fan via an auction, but that's surely a retrospective disqualification.