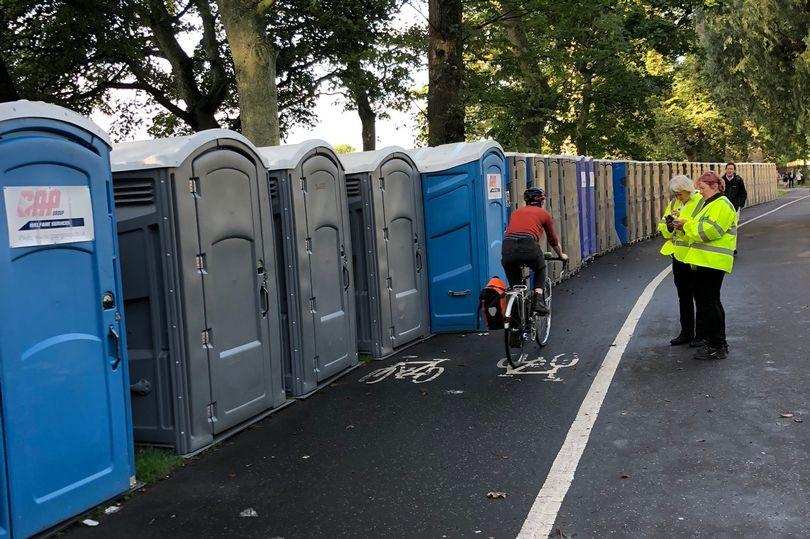 The portaloos have now been reversed to avoid users opening them into the path of oncoming cyclists, thus preventing potential Near P*ss of the Day incidents...
by Tim Bonville-Ginn

Adding that the portaloos have been moved to face away from cycle lane.

Cyclists in the Scottish capital of Edinburgh who were angry at the placement of portaloos along a cycle lane at North Meadow Walk have been somewhat appeased, after a Scottish Government spokesperson reportedly announced that they have now been turned around, presumably to prevent cyclists riding into the 'dooring' zone of lavatory users along the route.

The portaloos had been put in place to cope with the large crowds expected to visit St. Giles Cathedral so they could see the Queen’s coffin as it lay in rest, as well as seeing the King and other Royal Family members.

Retired professor, surgeon and local cyclist Chris Oliver has voiced his frustration. He told road.cc that there are “50 portoloos, all with doors opening onto the cycle path.

“You won’t know if there is a cyclist or pedestrian outside the loo door when you open it. Significant injury to a pedestrian or cyclists will occur.”

The facilities were lined up on the grass with the doors opening onto the path to provide a solid surface to walk on... but instead of putting the portaloos on the pedestrian side, the doors opened straight onto the cycle lane side instead.

They are lined up there as it is a relatively short walk from the Royal Mile, where St. Giles Cathedral sits.

The cycle lane sits on the National Cycle Route 75 and is a well used lane in the city as a way to avoid busy roads close to the city centre.

We asked Mr. Oliver what he thought The City of Edinburgh Council should have done.

“They should have placed the portaloos back from the cycle path with a dedicated pathway, not on muddy grassland," he said.

"There are too many instances when cyclists' pathways are ignored when roadworks occur. This is just another example of cyclists being ignored.

"Someone will definitely get injured if the cycle path is not closed. Especially as it gets dark.

"I don’t know if the cycle path has been closed today. If not, a significant accident will occur.”

In an email sent to road.cc, it is reported that a Scottish Government spokesperson said the facilities have now been rotated to face away from the cycle lane after the dangers were brought to their attention.

The Queen’s coffin will remain in the cathedral until 3pm today, after which the Queen’s journey to Buckingham Palace and later Westminster Hall will begin.

road.cc has contacted The City of Edinburgh Council for comment.

1
Rapha undergoes refinancing operation to write off debt but says it “far outperformed” rivals in 2022
2
Near Miss of the Day 848: An overtake worthy of the 'must get in front' title
3
Victory claimed for harassment campaign by “mob of decent people” as helmet cam cyclist deletes Youtube and Twitter accounts
4
Large vehicle may have crashed into controversial bike hangar, council says
5
“People need to see justice being done”: CyclingMikey says camera cyclists suffer online abuse because some motorists “feel they have the right to drive how they want”
6
Judge tells man who "played the system" after dangerous driving killed two young boys to expect "very significant sentence"
7
Near Miss of the Day 847: Careless caravan close call causes cyclists concern
8
Mavic launches the Cosmic Ultimate as “lightest wheelset in its category”