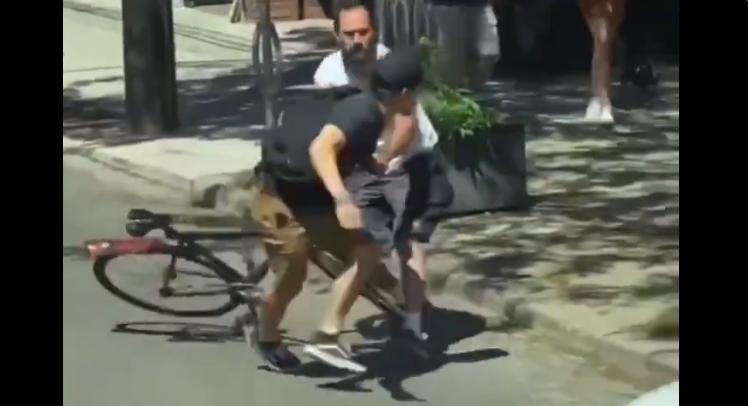 Footage posted to Twitter shows a huge road rage row between a cyclist and a driver in Toronto, Canada – although it is not clear what sparked the incident.

It seems that there was already some sort of altercation going on at the start of the clip, which is almost a minute in length and was filmed from an elevated position in one of the vehicles queueing behind.

Probably one of the wilder videos to come out of Toronto. Motorist and bicycle rider get into a confrontation. The Bike rider then, punctures the trucks tire… almost 1min of wild video#Toronto
DM FOR CREDIT. Submitted video pic.twitter.com/8lr0edfiX8

The driver of a silver pick-up truck, stationary at an intersection, is leaning out of the cab, then gets out and pushes a cyclist – until now, out of view, in front of the vehicle – away, then gestures at him.

As the driver walks back round to the other side of the pick-up truck, the cyclist takes something from his pocket and appears to puncture – or at least, attempt to puncture – one of the vehicle’s tyres.

The motorist, who had seen it happen, runs back round and chases after the bike rider, who is just a little too slow to remount and the pair tangle, the cyclist turning round and trying to make his getaway on the sidewalk.

The driver catches him, however, and pushes him off his bike, which he then starts swinging at the wall of a building – just as a policeman runs towards the scene.

There still doesn’t appear to be any news on what actually sparked the incident, but hopefully tempers calmed down quickly.