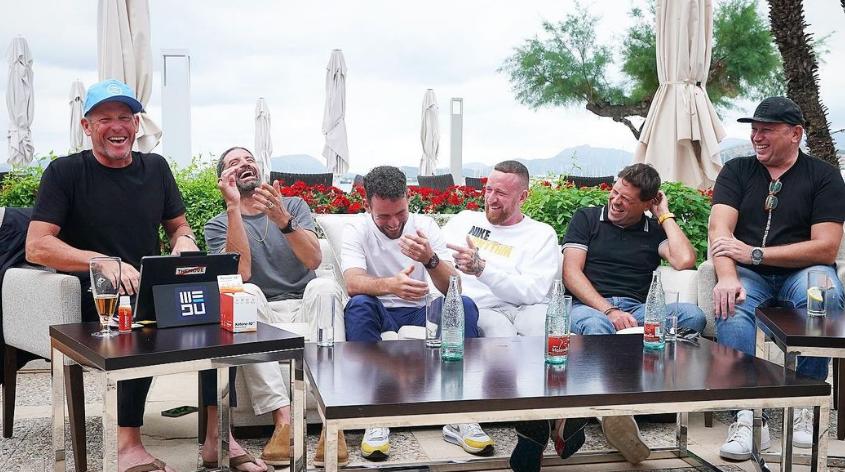 Why was Mark Cavendish riding with Lance Armstrong this week?

A certain Mallorcan group ride has set cycling’s small corner of the internet ablaze… But does it actually matter?
by Ryan Mallon

It may be the set up to a not-particularly funny joke about pro cycling’s past and present, but it is a premise that has provoked quite a bit of consternation among the sport’s fans this week.

On Tuesday we reported on the live blog that Britain’s two most recognisable road cyclists had joined Armstrong, Hincapie and Ullrich – along with a dozen-strong contingent of paying customers – on a series of group rides on the Balearic Island.

This end-of-season gathering – comprising, it’s safe to say, a veritable who’s who of the past thirty years of professional cycling – formed part of the 2022 edition of ‘The Move Mallorca’, a cycling holiday off-shoot of the former (stress, former) seven-time Tour de France winner’s long running podcast, where guests pay more than $30,000 to ride a few wheels behind Big Tex and his chums on the Sa Calobra.

It’s unclear at the moment whether Wiggins and Cavendish have been paid for their participation in the American’s group rides (Wiggins is a frequent presence in Mallorca so may have just popped along for a few extra training miles on his old pre-Tour stomping ground), but Armstrong has spared little opportunity to plaster the British riders’ faces all over his social media channels.

However, there was one photo in particular that seemed to flip a switch in a certain section of the online cycling community.

The image depicts host Armstrong sharing a laugh on an outdoor terrace with what constitutes a Fantasy Cycling line-up of podcast guests and who he describes as “dear friends”: 1997 Tour winner and the Texan’s perennial rival in France, Jan Ullrich, longstanding US Postal teammate and friend George Hincapie, and the man once regarded as one of the greatest directeurs sportifs in the business, Johan Bruyneel.

And Cavendish and Wiggins, of course.

“This photo makes me a bit sick,” one Twitter user wrote upon seeing the image of the chummy podcast recording.

“Even if solely from a PR perspective, surely this is something you just DON’T do,” said another.

“I guess optics don't matter when you're retired (or nearly retired)…”

Meanwhile, Mark Cavendish and Bradley Wiggins have been cycling in Mallorca with some American who didn't win the Tour de France seven times. I guess optics don't matter when you're retired (or nearly retired). pic.twitter.com/bTIeXrIREY

While Bruyneel, Hincapie and Ullrich (the subject of Daniel Friebe’s recent excellent biography) also remain synonymous with the EPO generation of the 1990s and 2000s, it’s Armstrong’s decade-long status as persona non grata – and Wiggins’ and Cavendish’s apparent willingness to be associated with his undeniably tainted ‘brand’ – that has appeared to most rankle onlookers of their Mallorcan shindig.

(In fact, the troubled Ullrich was and remains a more popular figure among cycling fans than his American counterpart, despite his own spectacular fall from grace in 2006 – an intriguing paradox that perhaps sheds a light on the sport’s uneasy relationship with its murky past. Do we ostracise certain riders because they’re cheats? Or because we just didn’t like them that much to begin with?)

In any case, that Cavendish and Wiggins appeared alongside the banned Texan shouldn’t be surprising, however. The Manx sprinter has already featured on The Move once before, and has cited Armstrong’s personal support for and encouragement of his fledging career during the latter's ill-fated comeback of 2009 and 2010.

In his first autobiography At Speed, published in 2013 – the same year Armstrong confessed his doping to Oprah Winfrey – 2011 world champion Cavendish described the 1993 rainbow jersey winner as “mesmeric” and, while describing the “bitterness” of learning that it was all a carefully orchestrated charade, acknowledged that the “race to expose him at times resembled a witch-hunt”.

Meanwhile, Wiggins’ attitude towards Armstrong has oscillated wildly during his career, from praising his rival for the 2009 Tour podium in his first autobiography to calling him a “lying bastard” in the wake of his 2013 doping confession, before defending his “human side” and including him in his book of ‘Icons’ in 2018.

That human side can be witnessed in The Move’s 46-minute long episode (once you ignore Armstrong’s incessant attempts to shift some product).

Armstrong jokes that he can get Wiggins’ knighthood taken away following a typically heavy night on the tiles, Hincapie and Cavendish reminisce about their time together at High Road, and a healthy-looking Ullrich gives Remco Evenepoel some invaluable and experience-heavy advice (“Not too many parties in the winter!”). Meanwhile, Armstrong casually drops in some allegations (the 2012 Olympic road race, anyone?) and makes Cavendish uncomfortable, asking him the kind of questions about the 2023 Tour and that record which would, in normal circumstances, result in a blunt, expletive-laden retort to an unsuspecting journalist.

But regardless of the human aspect of appearing on a podcast and going for a spin with a pal on holiday, it’s the optics that matter to most.

While the retired Wiggins has his high-profile punditry gig with Eurosport-GCN, Cavendish – after all – is still a pro bike racer.

So, how do Quick Step-Alpha Vinyl feel about their outgoing rider swanning around Mallorca with the sport’s most controversial figure and their sponsors’ logos emblazoned on his chest? When contacted by the Independent, the Belgian team declined to comment on the matter and, anyway, it won’t be their problem for long.

Moreover, what do Cavendish’s potential suitors think about the Brit and American’s ‘special relationship’?

The former world champion is heavily linked with a move to the French Pro Conti B&B Hotels squad (set for a funding boost from new title sponsor Carrefour), a team that relies on a wildcard invitation to the Tour de France. Yep, the same Tour that has unceremoniously crossed Cavendish’s riding partner from the record books.

Perhaps none of this will matter a jot, and the cycling world will move onto the next salacious bit of gossip (Remco to Ineos anyone?) before even Armstrong can flash his detractors ‘The Look’.

In any case, the condemnation of Wiggins and Cavendish’s stint in Mallorca (and even Armstrong’s continued status as persona non grata in a sport littered with the remnants of its not-so-distant past) highlights cycling’s ongoing struggle – almost ten years on from Oprah – to reconcile the apparent need for clean, black and white narratives with its extremely grey reality.