“I felt in my gut that I wanted to do something,” said Heidi Franz, one of the organisers behind the protest
by Ryan Mallon

As the United States comes to terms with the Supreme Court’s decision to remove the constitutional right to an abortion, over half of the elite women’s field at the US national crit championships took the knee in protest during the pre-race national anthem.

Coryn Labecki, Kaia Schmid, Heidi Franz and Alexis Ryan were among the riders who took the knee as part of “a moment of solidarity” before the race, which was won by Ryan’s sister, Kendall Ryan.

Around half of the country’s states are expected to ban or severely curtail access to abortion services after the Supreme Court overturned the landmark 1973 Roe v Wade ruling, which granted federal protection for women choosing to terminate a pregnancy.

Tennessee, where the US Pro National Championships are currently being held in Knoxville, is one of several states which has a so-called “trigger law” in place, enabling an abortion ban to take effect within 30 days of the Supreme Court’s ruling.

The decision to take the knee – a form of protest at sporting events popularised by NFL player Colin Kaepernick’s campaign against police racism – before the criterium championships was made by a number of riders in the hours leading up the race.

“I felt in my gut that I wanted to do something, so I reached out to other people to see what their feelings were as well,” InstaFund Racing’s Heidi Franz told VeloNews.

“My teammate Maddy [Ward] had told me that one of the pro men’s racers had reached out to her and asked if we were organizing anything, so then it was like, we should really do something. 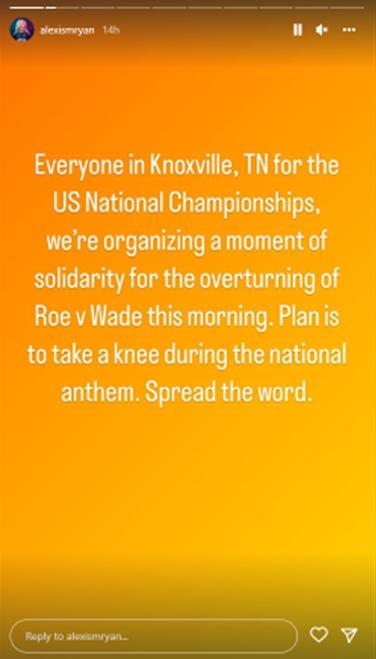 “The national championship is a symbol of patriotism,” Alexis Ryan, who announced on Instagram that the protest would take place, said before the race.

“And it’s obviously a really tragic moment for women in this country, what happened today.

“I think as athletes, we are role models to younger women, but we are also role models to the entire world, and I think it’s important for us to speak our minds and make a statement with what we’re doing here.”