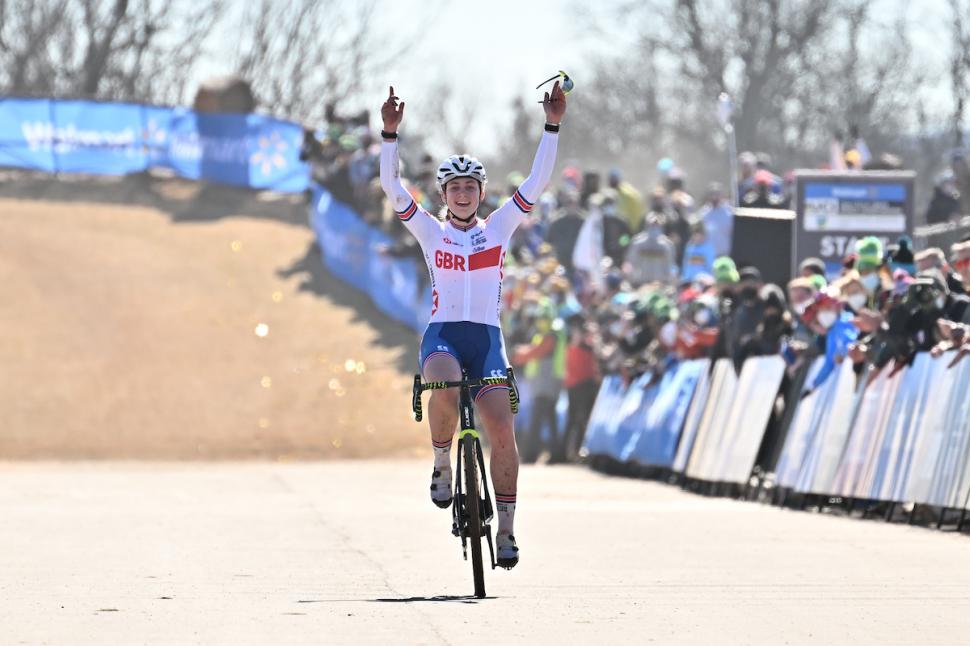 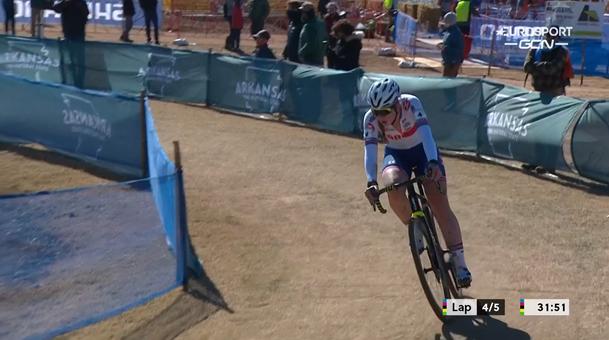 Bäckstedt, who contracted Covid at the start of the month, showed there were no lingering signs of the virus as she put on a dominant display befitting her status as the pre-race favourite. Following an early move from the Netherland’s Lauren Molengraaf, Bäckstedt definitively sprinted away from the pack on the key climb halfway through the first lap.

Despite a spirited chase from Leonie Bentveld, the overall winner of the junior World Cup this winter, the seventeen-year-old from Pontyclun never looked like being caught on the fast and wide course (a far cry from the muddy World Cup race on the same circuit in October), eventually finishing over 30 seconds ahead of Bentveld, with Molengraaf in third.

British champion Ella Maclean-Howell, who looked strong throughout the race, made a late move to take an impressive fourth place behind her world champion teammate. “If I’m honest I’m just shocked. I’ve had a pretty good season on the road and in ‘cross this year,” Bäckstedt said after the race, with typical understatement.

“I was unlucky with the World Cup and with nationals to have Covid, and miss those, but I think ultimately it made me fight back stronger and come here to put that extra little bit of fire into my race.

> 6 reasons to try cyclocross this winter — have crazy fun, build skills & maintain fitness in the mud

“I was speaking to my coach before I raced and I asked, ‘do you think I should try and attack up the first climb?’ And he said, ‘if your legs are feeling good, then go for it.’ I came into the little kick in second and I just opened the gap and opened the taps. I just went as hard as I could go up there. I got to the top and I had people from the team saying ‘you’ve got ten seconds, five seconds, or whatever the gap was’. I was like, I’m just going to keep going.

“Every lap I made sure to put the effort in up the climb each time, because that’s where I knew I would make the difference. I just put everything together. Yeah, it was a good day.”