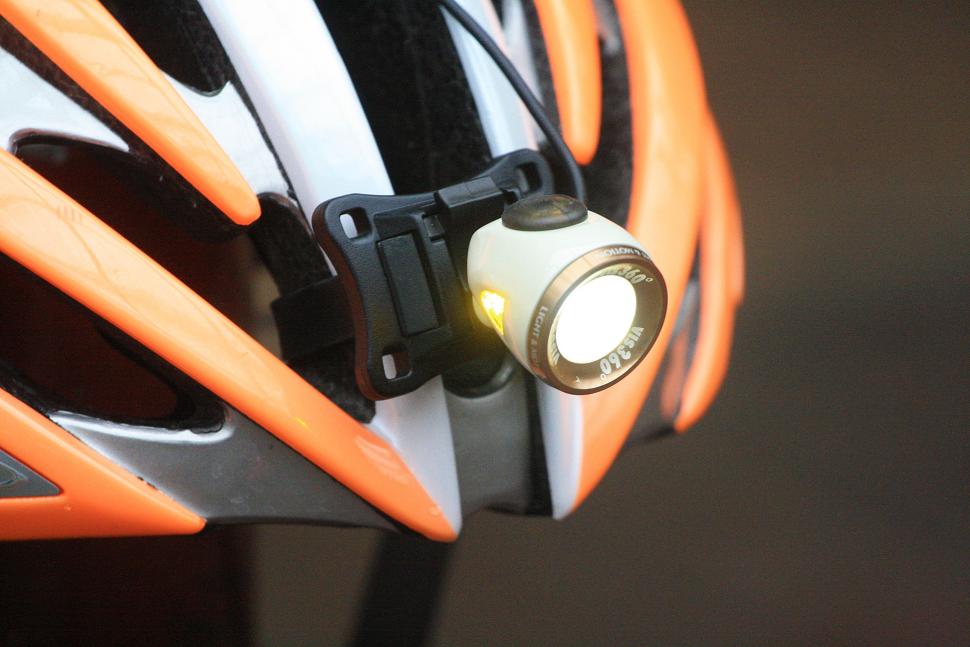 8
10
Well made back up light for country lane use or urban commutes. Good visibility but watch those burn times
Weight:
110g
Contact:
www.madison.co.uk
How we test

I've never really got on with helmet lights but Light & Motion's Vis 360+ has changed my view. Loads of adjustment, decent power and beam shape make for a very good commuter light that offers high up, 360° visibility in amongst traffic.

In the box you get a single LED front light, a three LED rear which also holds the Li-Ion rechargeable battery, USB cable and all the mounts you should need depending on the venting layout of your helmet.

On full the beam has a good spread and you could easily ride with it as your only source of 'see by' light. You've got plenty of adjustment at the bracket which lets you get the positioning right without dazzling oncoming drivers.

The bracket is held in place by way of a rubber strap with holes like a watch strap and once fitted to my helmet it didn't move one bit. The front also has the button for controlling the modes and pressing it didn't make the light move either.

Side visibility is achieved thanks to orange 'sidelights' which are actually very bright and show up well. The rear has these too.

Speaking of the rear, this is where the battery sits as it's an integrated unit. An all up weight of 110g is noticeable at first but soon disappears and I wouldn't say it gives you neck ache or anything like that.

A new addition to the 360+ over the standard is a button to allow you to toggle the rear on and off. It would be nice if this had the option of turning the front off and leaving the rear on as I think this is more important on busy roads.

The three LED's pulse when they are on which makes them more noticeable in my eyes than a straight forward flash. Light & Motion don't confirm a light output for the rear but I'd say it's around the 10 lumen mark dropping to 5 when the front is on the 125 lumen setting.

The LED's are angled as well which means they are more visible to car drivers even when your head is dipped and they certainly look brighter than they actually are.

The front and rear are connected by a coiled cable which coils to keep it taught so you don't have to worry about any wires dangling anywhere.

As far as burns times go the 360+ was cutting it fine on those quoted by Light & Motion with those first few runs only giving about 2hrs 30. A new battery does take a few cycles to get fully efficient though and we did see an increase in those burn times but only up to around 2hrs 50.

Testing took in the daily soakings of November and there were no issues with waterproofing as the 360+ didn't miss a beat. The charge point is hidden behind a rubber bung on the bottom of the rear light so is kept out of most of the rain.

Overall the 360+ is a great addition to a commuter's arsenal of lighting and is borderline bright enough to be your only source of light on dry unlit country lanes. The all round visibility is great around town and stands out above the roofs of cars.

The overall quality is good as its wet weather resistance though only you can decide whether £139.99 is justifiable for an, albeit good, secondary light if your ride goes out of town, and indeed in town too. Although I found them bright enough to use as a main light round town, you wouldn't technically be riding legally if you did use them as your main urban set up because the law requires your lights to be fixed to the bike.

For urban use though when paired up with a couple of decent flashers - for added visibility (and legality) on your bike it'll do the job day in, day out whatever the weather.

Well made back up light for country lane use or urban commutes. Good visibility but watch those burn times

Light & Motion have aimed the 360+ squarely at the commuter with this helmet light having front and rear illumination above the height of traffic. The 360 name comes from the angle of visibility thanks to side lights. It works as either a sole see where you going light or a secondary option for road or trail rides.

Looks really well put together and doesn't feel flimsy at all. All switches and covers have a solid click and snug fit.

Really easy to set up and incremental movement on the front light allows simple adjustment.

A range of fittings for various helmet vent patterns which keeps the lights pretty secure. Some movement but nothing to worry about.

No issues in heavy downpours of an hour or more.

A little less than claimed and the outside temperatures weren't below freezing to affect battery life. A 6hr recharge via USB though is ideal for commuters, just so long as you're organised enough to charge it as soon as you get to work.

An impressive beam pattern from the front light and the rear stands out very well thanks to its pulse pattern. Riding by the 250 lumen front is possible at 15mph but not much more, better performance than a 250 lumen bar mounted light though.

110g for front and rear light plus battery is pretty impressive I reckon and is barely noticeable when attached to your helmet.

It is pricey when you could strap a couple of cheap lights to your helmet for the same output but the 360+ works well as a package and will last a long time. A long term investment.

It increases your visibility in traffic for sure and helps at busy junctions as well.

The surprising amount of light thrown out from the small front light.

The burn times coming up a bit short

A really good package here from Light & Motion that ticks a lot of boxes for the commuter. It works well in the lanes too for looking around bends before you get there. It is expensive though but probably worth it in the long run. 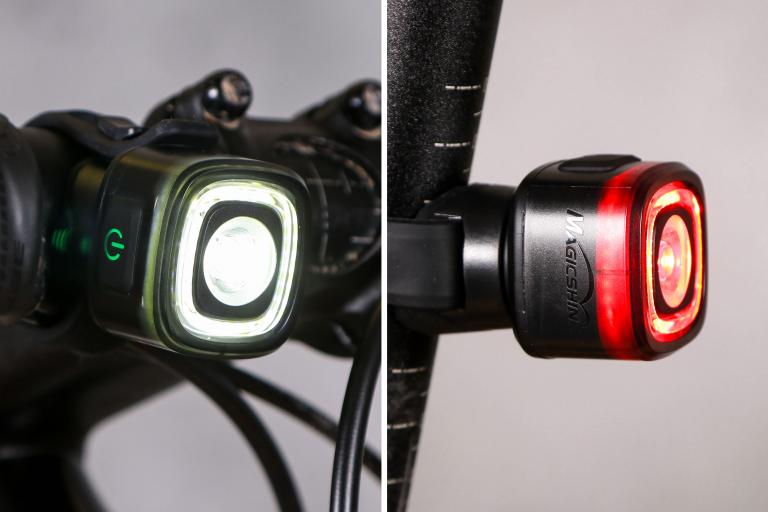 Well-designed lights, though the front would benefit from a 150-lumen daylight flash 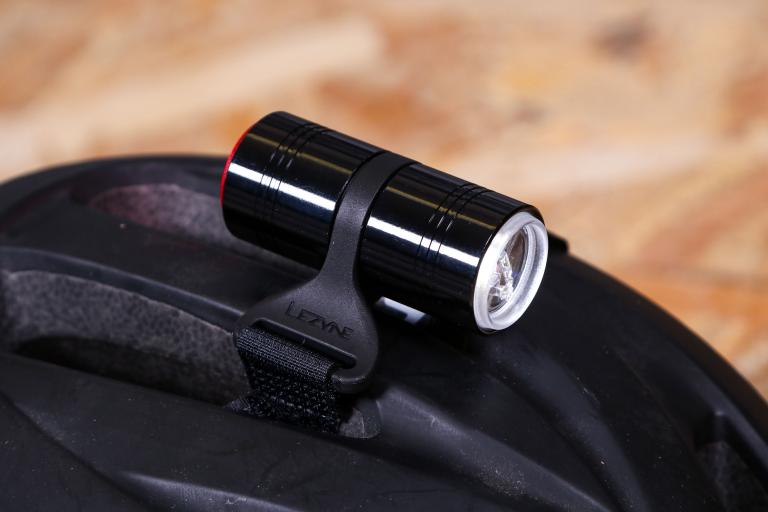 Compact 'be seen by' light, but it's not the best value out there 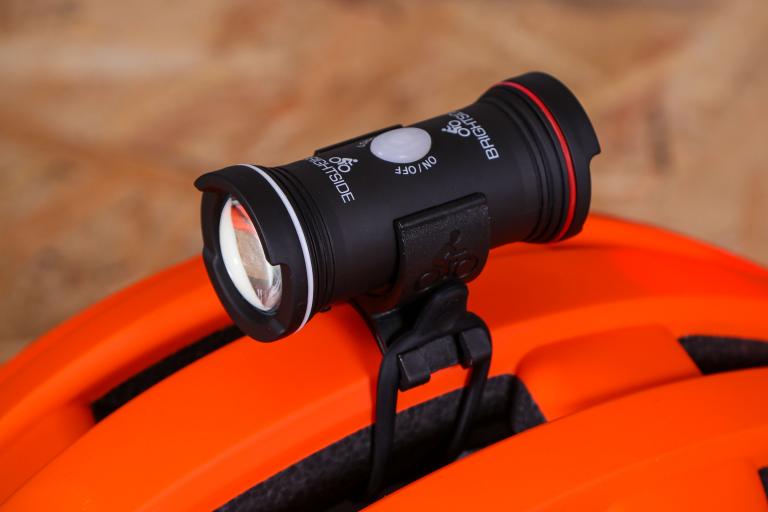 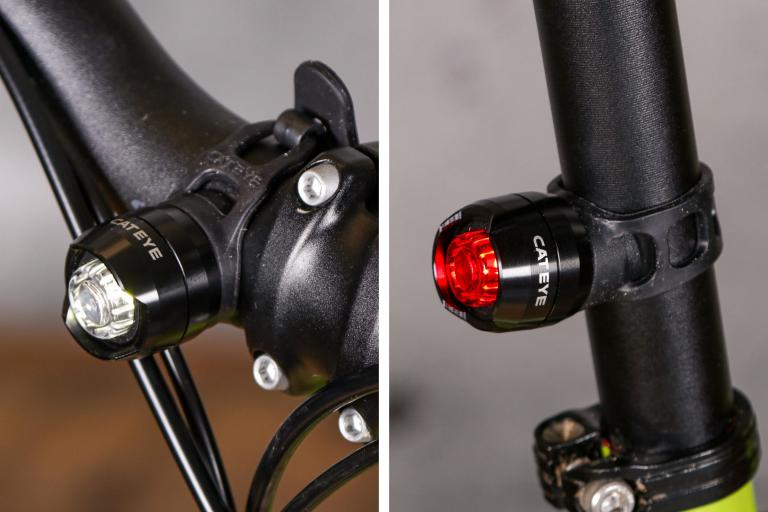 Compact 'be seen' lights with the bonus of being USB rechargeable