7
10
High vis, innovative, and a conversation starter, but it could do with another bracket and better performance as a brake light
Weight:
66g
Contact:
www.velocitylight.com

The VeloCityLight is one of the most impressive puns of a product name that I know of, being both an urban light and also a speedo. The light itself works well, even if there is a slight delay in showing your speed when you first set out. It loses points for its size, though, combined with a bracket that needs to be more secure.

After a successful 2014 Kickstarter campaign, the VeloCityLight has become more widely available through the company's online shop. The main selling point is that the light itself shows your speed in either kph or mph to whoever is behind you with very bright LEDs. It also brightens as you slow down, acting as a brake light for those behind you.

In terms of how it manages to perform its core tasks, it largely works well. It shows your speed relatively accurately – it's not as quick to change speed as a regular cycle computer, for instance – but then it doesn't need to be pinpoint accurate. The light is also very bright, giving off up to a retina-burning 180 lumens, but also has four different intensity settings. I normally went for the second brightness, which was around 100. 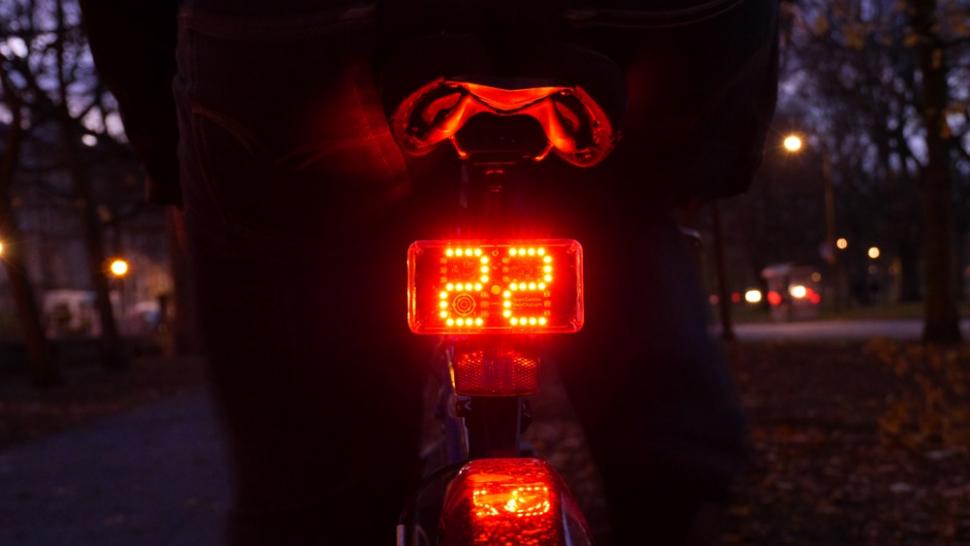 I found that the brake light element was unpredictable, perhaps because of the slight speed lag. It would take 1-2 seconds before the speed would be read accurately and this could explain why the brake light was fairly erratic. Quick braking wasn't really picked up, so it would only work effectively if you slowed down slowly.

The way it picks up the speed is through an ANT+ speed sensor. It comes supplied with one or you can use one you already have attached. I used both and it was easy to pair even when also using the same sensor for my computer. There is a very simple menu on the light that allows you to pair, change between kph or mph, and set it to 'animate' (simple light rather than number display). This is easy to use through the two buttons on the rear of the light. 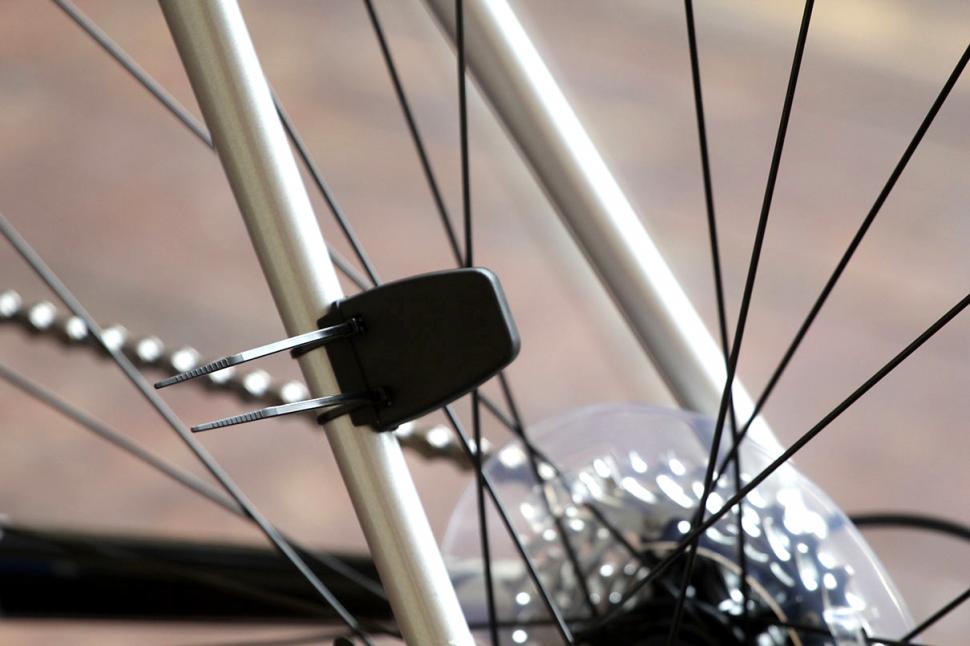 The light also has 6-14 hours of use between charges, which seems accurate. I used it for two weeks every day on a variety of ride lengths before it needed charging. Charging is also simple, through a micro USB.

In terms of attaching the light to the bike, it has a fairly basic bracket that screws tight with a crosshead screwdriver. Unfortunately this bracket, combined with the large size of the light, meant it would rotate around my seatpost. Normally this wouldn't matter too much, but because of how wide it is I could feel it on the back of my legs as I pedalled. I do have a narrow 27.2mm seatpost, but this isn't so uncommon that provisions shouldn't be made for it. The light is easy to add and remove from the bracket, though, and never feels like it would fall off mid-ride. The rrp of £49.99 is expensive for a light, but it does provide considerable visibility, which is what you want during the dark winter months, and it's certainly distinctive. I had several people talking to me about the light when out riding.

It's also fairly hefty in both size and weight, coming in at 66g on the road.cc scales of truth and 110x60mm. It isn't the heaviest light, but I doubt you'd want to use it for time trials or climbing at dusk.

>> Check out our buyer’s guide to rear lights here

Overall, I have mixed feelings about this light. On the one hand it does what it says in terms of showing your speed in a very bright light, but on the other the braking function is unpredictable and it twists around the seatpost. That said, this is the first model the company has made, and the designers will undoubtedly look to solve these issues in the next iteration.

High vis, innovative, and a conversation starter, but it could do with another bracket and better performance as a brake light

"An urban light that allows your speed to be displayed to those behind you whilst also providing a brake light of sorts, by brightening as you slow down."

I think that the core competencies of the light work fine, with it being very bright and also showing the speed to a sufficient degree to allow those behind to have a good knowledge of how to pass you. However, the brake light aspect is relatively unpredictable, sometimes working and sometimes not.

The VeloCityLight; 48 LEDs giving out between 60 to 180 lumens, with integrated brake light function, speed display when linked to ANT/ANT + sensor, USB rechargeable1800mAh internal battery offering 6 to 14 hours of continuous use. Also comes with a micro USB cable and seat post attachment.

The light itself is solid and could probably survive being dropped a few times. The bracket lets it slip round my seatpost, which isn't ideal as it can catch the back of your legs while pedalling.

Bright light works well, pumping out a huge amount of light, and the speed seems to display well. Let down by the brake light function, though, which is unpredictable.

Seems like it would last a long time and the battery is also impressive given that it uses fairly low powered LEDs.

OK weight for a light, especially one of this size that pumps out so much light.

For a light that twists like it did, £50 isn't ideal. That said, it is unique in its ability to show speed to those behind and the brake light feature certainly sets it apart, so may be able to justify this price for those looking for this original element.

The core components of being very bright, visible and showing speed worked very well. But it was slightly let down by an unpredictable brake light and twisting bracket.

The brightness is very impressive and I liked that it was a conversation starter on the road, people were very curious about it.

The twisting bracket was annoying, but luckily one that is easily remedied in the next version.

Would you consider buying the product? Not with my current seatpost, maybe with another bracket.

Would you recommend the product to a friend? If they were looking for safety, then yes.

It does what it says, but falls slightly short in terms of the brake light and bracket. If these issues can be solved in the next version the marks would be higher.