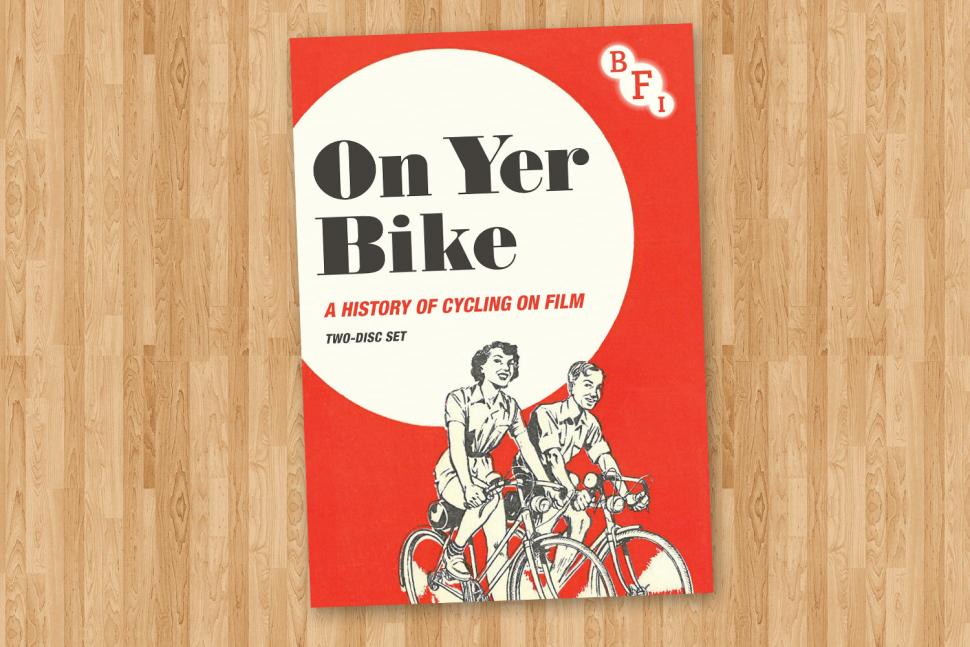 On Yer Bike: A History of Cycling on Film

7
10
Unique collection of classic films about cycling that are now available to future generations
Weight:
100g
Contact:
shop.bfi.org.uk
What the road.cc scores mean

Under the banner of 'A history of Cycling on Film', this two-DVD set contains 29 films, ranging in length from one minute up to three-quarters of an hour for a grand total of 236 minutes of footage. There is a wide range of cycling-related films: black and white or colour, silent or talking. You have 'short dramas, animations, advertisements, newsreel items, and public information films'. It really is a fascinating insight into the ways in which cycling has been portrayed in Britain over the years.

While cycle sport is well represented, topics also include manufacturing, commuting, and leisure cycling. The overall theme is that of a nostalgic look back at 'cycling as a rite of passage', and will provide a trip down memory lane for some – or a revealing view of a bygone era for younger viewers.

If you want to get a flavour of what is on offer I recommend looking at the BFI Player: there are 76 films to view there, including about half of those included on the DVD – which means that the other half are only available to view from the DVD and do not appear in the on-line collection.

While most are free to view on line, several are chargeable; most of the chargeable ones are also included on the DVD, and if you were to download them it would cost you a total of £7.23.

While you are on the BFI Player you will see other cycling films of note that might be of interest and are available to download, such as the classic Bicycle Thieves (£2.13), and the recent Lance Armstrong story The Program (£3.83).

One argument often put forward in support of a DVD is that the quality will be better, and even more so when a Blu-Ray version is available. That does not really apply here, because with material dating back to 1899 it is no surprise that some of the films have flaws that the digitisation and re-mastering process could not remove: it is a similar situation to that discussed with the book of photos from The Horton Collection.

It is good to see this archive material being preserved before it is too late to act: not many organisations have access to such a wide-ranging catalogue of original material, nor have the resources to do the necessary refurbishment and then make the films available to a modern audience.

It's also good to have a DVD to review after my big run of books recently. While sales of DVDs may be in decline, I was assured by the British Film Institute (who supplied this two-disc set) that they still sell thousands of DVDs each year.

Assuming that you still have the means to play a DVD, there is something about the physical item that makes it more desirable than a downloaded film: not only might you get additional material (such as an informative booklet in this case), you will not be charged again for repeat viewings.

The DVD set is available from Amazon and similar, although the BFI's own shop is currently competitive on price.

Make and model: BFI - On Yer Bike History of Cycling on Film

The DVD compilation was put together during the buzz around the Tour de France coming to England, when a lot of people that had perhaps stopped cycling were reminded again that cycling is as popular today and timeless as it has always been. Rather than base it entirely on competitive cycling we chose to programme the set on the theme of nostalgia – it wasn't especially aimed at sports fans, but rather at those that recall cycling as a rite of passage. The question 'Do you remember your first bike?' was a recurring one and it was important for us to capture those moments along that life journey – from longing to own your own bicycle – to the adventures you had with your friends on bikes, the safety element that encompassed the cycling proficiency test and then as you mature, advanced cycling for competition, leisure and the commute. The principle design of a bicycle has remained largely unchanged in over 100 years, giving us a timeless aspect which enabled us to select from the entire chronological spread of film history and making Victorian lady cyclists as relevant today as a 1980s film about safely turning right on your BMX.

Subscribe
On Yer Bike: A History of Cycling on Film
BFI