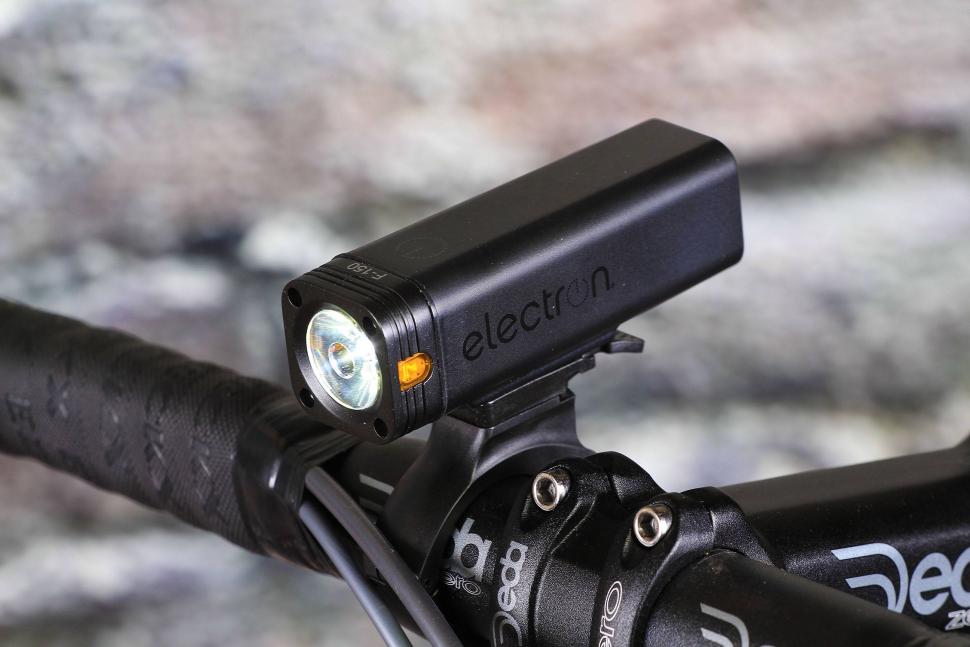 The Electron F-150 is an inexpensive torch type light with four useful modes, capable of producing 150 lumens in the highest setting. However, it's not particularly sleek compared with more potent competition, and the handlebar mount, though it does its job once on, is very basic.

It's rare to find a bad bracket these days, but the F-150's feels flimsy and showed serious signs of indigestion with 26.0mm handlebars, and oversized diameters were a non-starter. If you have a GoPro-type mount, you can buy a £1.99 adaptor for the F-150 and use it with that, according to distributor Madison's brand manager; I swapped ours for its bigger sibling's, which is infinitely superior. (Read my review of the F-400 here.)

We've got rather used to aluminium, even at this price point. The F-150 has the same resin body and aluminium head as its bigger sibling, although the former felt less substantial and I'd be mindful of it falling from a jersey pocket onto a hard surface. That said, aside from some very minor swirls, it's holding up well against everyday carelessness.

The composite lens and reflector are what I'd expect from this end of the market. The former doesn't employ collimator technology or similar jazz but still casts a reasonably pure arc of light. Rather than use cutaway design, Electron has plumped for two amber windows – literally the size of rice grains. More about that in a minute.

As with the F-400, there are four modes and two cycles. In standard you get four modes: high (default initially, though it'll turn back on in the last mode used after that), with subsequent prods bringing on low, then pulsing, then flashing. The second cycle ditches the flashing and pulsing modes, so you can toggle between high and low – like main and dip beam on a car.

Although 150 lumens won't win any bragging rights, it is adequate for suburban/urban stuff up to around 18mph, with the spot and flood combination beam offering a fair compromise of navigation and presence. Decent throw and purity of light have been a pleasant surprise – I never felt like there were stealth moments when entering the flow of traffic or tackling roundabouts. Fully juiced, it's lasted 3hrs 55mins against 4hrs quoted – which will be accurate enough for most folk.

> Read our guide to the best front lights for cycling

Attached to a helmet, it's come in handy for reading signs, rummaging through panniers and quick roadside tweaks. However, unlike higher end designs, the outer halo can make riding some unlit stretches a little sketchy.

Electron cites low as 75 lumens, with a real-world run-time of 7:57; it's bright enough for short blasts around town, well-lit cycle paths, and limping home on, but I've felt much safer pairing it with a basic blinkie.

Pulsing modes are something of a mixed bag, often having too long a pause between strobes for my liking. The F-150's tempo is perfect, just slow enough to catch the eye and not be drowned out by seasonal neon. Though the faster flash runs for nigh-on 30hrs and seems better along the open road on glum afternoons, pulsing compensates for its comparatively short run-times (4:53, which may be a week or so between charges for some) by being less annoying at close quarters – slow-moving traffic and group riding being obvious examples. Nonetheless, friends reckon they could spot me in pulsing mode at around 150m in town, 200 in the lanes.

Flashing is certainly up there with everyone else's and coupled with generous run-times makes a brilliant, unofficial daylight mode.

Bracket aside, there's a lot to like here. My only reservations are to do with ever climbing spec and tumbling prices. Just a few quid extra buys a Blackburn Central 300, which boasts twice the output, decent run-times, a lifetime warranty and a better bracket. Look at our latest beam comparison engine and the £32 Niterider Swift 350 pumps out a fair bit more light for seeing by...

I say potentially good town and contingency lamp, spoiled by a poor bracket. Though reasonable value, there are more powerful models with metal bodies, twice the output and lifetime guarantees available for a few pounds more online.

Composites are reasonably solid and two-year guarantee suggests Electron is pretty confident too.

Generally intuitive, but getting from the steady to pulsing/flashing cycles took a little practice, especially from the saddle.

Certainly water resistant in the everyday sense and unaffected by short blasts from my high pressure garden hose.

Decent run-times, but on the flip side, charge times are equally long.

By no means poor, but up against some equally versatile and, moreover, more powerful competition.

Overall, the F-150 has proven itself a surprisingly versatile town or contingency light. Optics produce a decent throw of light for sub/urban riding and flashing is certainly good enough for dull, overcast afternoons. I am not convinced the amber side windows add much peripheral presence. I was also disappointed by the bracket.

Sensible range of settings with more power than numbers suggest.

Poor bracket and there are several models costing a few pounds more offering similar versatility but better build quality and, in some cases, twice the output.

By no means a bad light, but in a highly competitive market it's only average. The supplied bar mount did not impress and there are models with similar modes and comparable run-times but twice the power for the same money.