The Oxford Ultratorch Mini+ USB 15lm is a five-mode (one steady, four flashing) rear light, which produces 15 lumens – though it's bigger, presence-wise, than its size or numbers would suggest.

The five settings are selected via a raised, centre-mounted grey switch. More rubbery than some, it's still very positive, and can be operated in full-finger gloves. As it requires a definite single press, there are no accidental engagement or 'damn, gone past my favourite mode' niggles to report. There's no memory setting either, something I'll let slide given its asking price and overall performance.

The light is refreshingly well-sealed from the elements. The injection-moulded plastic body has a 'waterproof' rating of IP65, which protects the three diodes, lithium polymer battery and switchgear from pretty much everything bar sustained, full blown immersion. That makes it a great choice for hardworking winter/gravel bikes. As long as you've snugged the charge port cover home properly, it appears to keep going come hell or high water.

I've mounted ours low on the seatstays, right in the firing line of deep puddles, and given it sustained, close-range blasts with the garden hose without it missing a beat.

Like many, the back doubles as the bracket and tethers to host tubing via the familiar rubbery 'ladder' strap. This is stretchy and seemingly durable. I've had no issues swapping it between posts of varying diameters and it's proved equally dependable on pencil-thin seatstays. 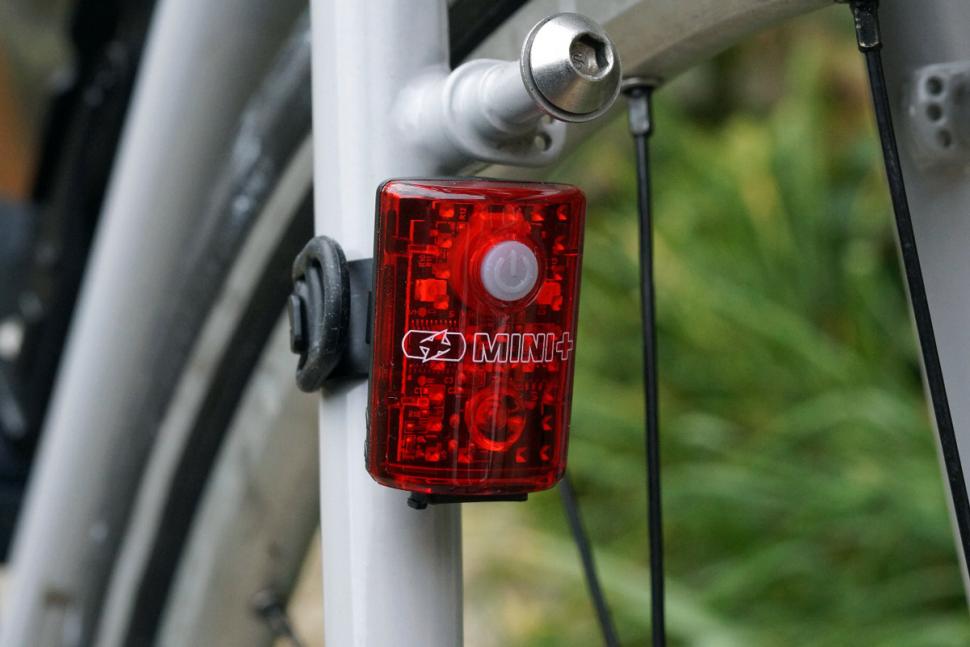 Helmet mounting is possible, although it requires a longer strap.

The light performs well throughout the settings. While the diodes lack the same visual command of COB (chip on board) types, they deliver a very warm, enticing glow, which is most captivating in the flashing/pulsing settings.

Run in constant, casual chats with other riders suggested they clocked me at 100 metres along the open road, dipping to 80m through town, and 60m for other vehicles after dusk. I'm also pleased to report a pronounced lack of stealth moments when entering the flow of traffic.

Obviously, running it in steady puts a dent in run-times – 90 minutes is pretty much your lot. At that point, the battery is totally exhausted and will power down, which might come as a shock if you're used to lights that automatically default to their lowest when reserves tumble.

> Buyer's Guide: 14 of the best rear lights for cycling

All the flashing modes are surprisingly extrovert, on par with Cateye's Rapid Micro along unlit roads. As with the Cateye, I'd prefer something closer to 30 lumens as a main rear light for longer than a few miles of pitch black roads.

There's not much to choose between the modes in terms of presence or economy, although each assumes a slightly different pace/pattern. The ability to switch and suit surroundings is very welcome, especially when cruising through seasonal town centre illuminations. I've managed between 4hrs 44mins and 4hrs 57mins from a full charge.

Visibility in town varies from 80-120m. Though only subtly different, the pulsing effect seemed particularly distinctive in the city, something I attribute to its sequential pace.

Along unlit roads and in the faster flash, visibility was extended to 125-150m, maybe 100m when it was cloudier. Though peripheral bite is reasonable rather than remarkable, I've never had any heart-in-mouth moments. Pulsing, by contrast, seemed to register at 80m. Run-times have come within 3 minutes of the 5 hours claimed.

Mains charging takes two hours, another quarter if it's via laptops/PCs. When charged, it flips from steady red to blue. The OEM cable is a little on the short side, but being an android pattern it works fine with those common to phones or tablets.

The Oxford bears close resemblance to the rear of Topeak's Mini USB combo, so if you were seeking a bargain alternative, the Ultratorch should be high on your list (the Topeak is £34.99 on its own). The lens also has a more pronounced curve than the Topeak, offering better peripheral presence. Its 15 lumens is certainly adequate for suburban riding and has exceeded my expectations on unlit roads.

By the same token, it faces stiff competition from the likes of Moon's Alcor, not to mention its Gemini stablemate and the Cateye Rapid Micro I mentioned above.

Materials and construction are very good, especially at this end of the market.

Intuitive switch, easily operated in gloved fingers but positive enough not to power up in a pocket or luggage.

IP65 is very good for this price point and ours has passed my hosepipe test with flying colours.

Run-times are moderate, although faithful to those quoted, and charging times are pretty convenient.

Seems very well made, but just ensure the port cover is fully home after charging.

Overall, it's a surprisingly bright compact light which represents excellent value for money. A little underpowered on its own for pitch black roads, but the modes and diodes are very distinctive and more than enough for town riding.

Nothing, given the asking price and design brief.

Would you consider buying the light? Yes, as a secondary/contingency.

An excellent secondary/contingency light and very well made for the money, if just a touch under-powered for extended journeys along unlit roads.