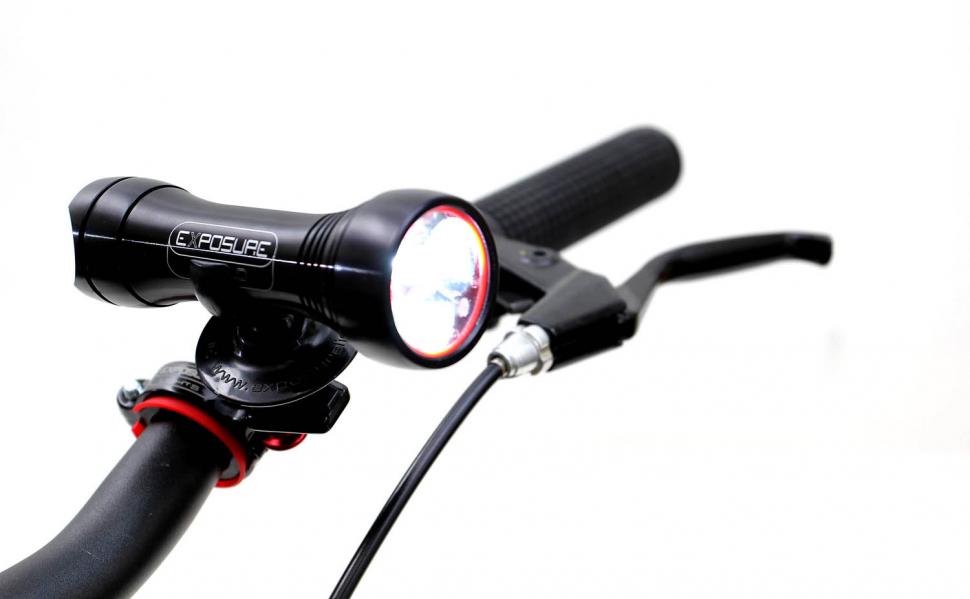 8
10
Versatile light with a unique blend of power and compactness that delivers on or off road
Weight:
123g
Contact:
www.exposurelights.com
How we test

The Exposure Diablo is something of a hybrid light, borrowing elements from elsewhere in the Exposure range. It's essentially the triple Cree XPG R5 LED emitter array from the Toro and the 2600mAh battery from the Joystick. The slender barrel works with existing Joystick bar and helmet mounts, although slightly strangely only a helmet mount comes in the box – you'll need to buy an extra mount to use it on your bars, which is a better bet for the road. To accommodate the three LEDs up front the CNC-machined aluminium casing flares outwards, and there's a similar but smaller flare at the back. The resulting dumbell shape is strongly reminiscent of the string-assisted circus toy for which the Diablo is presumably named. At 124g it's very light for a unit with a claimed output of 975 lumens.

At the back is a single rubber-covered button that doubles as a mode indicator and battery level warning with a combination of colours and flashes. The illumination helps you to find the button, too, although a semicircular cutout in the edge of the casing gives tactile feedback as well. The button's not the easiest to press with the sort of gloves you're likely to be wearing on a winter night, although you may find you rarely need to press it. If it turns out to be an issue, Exposure do a remote bar-mounted switch that plugs in to the Smart Port next to the main button.

The Smart Port is a rather clever socket. By day it's a charge socket (gold plated for efficient conductivity, no less). (As a side note, the supplied mains charger has a USB socket on it – the lead is detachable and can be plugged into a USB port on a PC, which saves you taking the whole charger with you in anticipation of a battery top-up.) By night, the Smart Port can have a bunch of accessories attached to it, either duration-extending piggyback batteries, the aforementioned remote switch, or additional tail lights.

While there are lights out there with higher claimed lumen ratings, the Diablo's narrow beam means that it's about the brightest you'll find if you're just looking straight ahead. Peripheral illumination is more limited, although you're not exactly blind to what's going on in the verges. While the beam pattern is symmetrical (rather than flat and wide like Exposure's own road-optimised Strada), the relative tightness of it means that it's not too hard to set the light at a position that gives good visibility without too much risk of dazzling oncoming drivers even with the prodigious output available on full power.

The Diablo switches on at full power, with a single press of the button stepping down through medium and low settings. There's a flash mode too, which is thoughtfully accessed via a long push and therefore sits outside the standard power setting cycle – from low a single press goes straight back to high. The flash mode itself is more of a pulse than a flash, as the light never goes out – it's a low-power beam with bursts of high. From flash, a single button push launches you back to a steady high.

Claimed run time from the 2600mAh li-ion battery is an hour on high, three on medium and ten on low, and I got real-world numbers close enough to that. An hour's not that long, but high power really is mighty – medium is ample for most purposes, you'll only need high for going properly fast on unlit roads. The low power mode is quite sturdy too, offering more oomph than full power on many compact commuter lights and adequate for sensible speeds.

While pure road riders will naturally look to the Exposure Strada, the versatile Diablo has a unique blend of power and compactness that certainly has its place, especially if you find yourself doing off-road riding at night too.

Exposure says: "The Diablo is one of our most popular lights. This light is often handlebar mounted with road users or helmet mounted for the ultimate mtb helmet light."

Exposure has the Strada as a road-specific light, so the Diablo's more of a multi-purpose unit. It's lighter and more powerful than the Strada but without that light's flatter, dippable beam.

The Diablo uses three Cree XPG R5 LEDs with a total claimed output of 975 lumens. The emitters shine through a resin collimated lens. It's powered by a 2600mAh lithium-ion battery with claimed run times of 1, 3 and 10 hours on High, Medium and Low settings. Everything is housed inside a lightweight CNC-machined aluminium body.

It's rather lovely, all swoops and curves and (obviously) strongly reminiscent of the circus toy for which it's named. Light, too, at 124g.

The Diablo uses Exposure's familiar one-button interface -- double-click for on (it switches on in High mode), single click to cycle through Medium and Low back to High, long click for flashing, extra-long click to turn off. The button's not the most accessible with thick gloves, but it's easy to find thanks to a cutout in the light body and a light in the button itself (which doubles as a mode/battery level indicator).

The Diablo comes with a helmet mount, which works well but isn't ideal for road use. Exposure offers a choice of bar mounts. The plastic ziptie mount is cheap but you'll probably need something on the bars to stop it slipping, while the aluminium quick-release mount works well but is expensive (and relies on a rather fiddly bolt that tightens from underneath for added faffery).

Exposure describe the Diablo as "weatherproof". There's a substantial seal around the lens at the front, a cover for the charging socket and a silicone diaphragm on the button. No weather got in during testing, and there was plenty of weather about.

The Diablo is something of a hybrid, with the same emitters as the chunky Toro light but the same battery as the slimline single-emitter Joystick. Run times are, therefore, limited -- you'll only get an hour of High. But Medium is ample for most purposes and that gives you three hours, so not too bad. The trade-off is compact size and low weight.

975 lumens is a lot, and unlike some inexpensive high-power lights the Diablo's beam is quite well-controlled too. It's still going to need care to avoid dazzling other road users, but the collimating lens does a good job of pointing most of the photons in a useful direction. The medium setting is ample for most riding and considerably more driver-friendly.

It's not packed up. Early Exposure lights had some teething troubles but the current generation seem pretty well sorted.

Small battery = low weight. It's significantly heavier than a Joystick, a difference you can feel on a helmet mount. But you're probably not using the helmet mount on the road.

You're clearly paying a premium for a light made in the UK in relatively small numbers, and there are plenty of cheaper lights around. The Diablo falls into the "reassuringly expensive" camp, though – the construction is a cut above most.

It's not "road optimised" like Exposure's own Strada, but the Diablo's beam is sufficiently controlled to make it a potent road option that doubles as a very useful off-road helmet light if you're so inclined.

The control button could be more accessible and it'd be nice to get a bar mount in the package too.

Would you consider buying the light? Yes, if I was after a self-contained multi-purpose light for road and MTB use.

A great choice if you want a compact light that's useful for both road and MTB applications.

I usually ride: Whichever's nearest the door  My best bike is:

I regularly do the following types of riding: cyclo cross, sportives, general fitness riding, fixed/singlespeed, mtb, Track; to the shops; with the kids