2021 A cyclists guide to the Pyrenees by Peter Cossins

A Cyclist's Guide to the Pyrenees by Peter Cossins

A Cyclist's Guide to the Pyrenees by Peter Cossins provides a level of information that would benefit anyone looking to maximise enjoyment whilst there. Cossins knows the area well, and understands what a cyclist wants to know. Anyone tackling the big-name climbs can be sure of making the best route choices, and those venturing further afield will discover how much more the Pyrenees has to offer.

Most guides about cycling in the Pyrenees just focus on the major climbs, and even then normally only on those that play a part in the Tour de France.

However, a trip up a famous climb can often be improved by creating an interesting loop, or by incorporating less well-known climbs; indeed, my own experience is that many worthwhile climbs won't ever play host to le Tour, and so are often overlooked.

It's clear that Cossins is not going to be restricted to the 'greatest hits' of the Pyrenees, because he covers 310 climbs within his 112 (primarily) on-road routes: I have done many of them, but I can see I still have unfinished business.

Cossins wants this book to perform a similar role to "Alfred Wainright's iconic guides to walking in the Lake District ... which are almost as essential to enjoying expeditions on those hills and fells as well-proofed jacket, trousers and boots." Whilst I don't know Wainright's work, I do have a good idea of what I want from a cycling guide.

Like most people, I don't have anything like the knowledge of the Pyrenees as Cossins, but would his book have been useful for planning my previous trips? Yes: not only would it have saved me some preparation time, it could have improved the quality of a few routes.

Been there, done that...

I looked back at several of my trips, and compared them to what Cossins would recommend: I will use my stay at Saint Jean Pied-de-Port as an example, because you wouldn't go there for any of the best-known climbs – so it's not quite so obvious what the essential routes would be.

My main objective was to go over Port de Larrau into Spain, and back over the Col de La Pierre Saint Martin – and it turns out this matches one of Cossins' routes exactly.

Actually, the route itself wasn't the hard part, as there are so few roads to choose from: it's also good to know if the scenery is worthwhile, if the wildlife is interesting, the typical weather conditions, or if the tunnels will require lights – and that is the sort of information that Cossins supplies.

That takes in two of the higher profile climbs in the area, but what else? Less well-known climbs can often give better views or more interesting challenges – but good quality information about them can be hard to come by.

I decided on a loop round the Col de Burdincurucheta and Col Bargargui, and guess what: Cossins has a route for that as well, and again our routes match. Cossins even gives a choice of return routes, prioritising climbing or scenery, which is useful local knowledge: I chose the latter, but only by chance.

He also recommends the anti-clockwise direction, "because you will be riding up the narrowest and least well surfaced sections rather than down them", and fortunately that is what I did. I like that, because it's not always obvious from a map if there is a preferred direction, or why, but it sure can make a big difference to your enjoyment.

I also tackled the Col d'Ispéguy on a 'rest' day, because it looked like a pleasant little jaunt on the map. I would have given it a higher priority if I had known "what a gem this comparatively small pass is", and would have spent more time plotting a circular rather than an out-and-back route): some sections looked like the sort of busy main roads I try to avoid, but Cossins' information would have put my mind at rest.

Too much of a good thing!

Based on my own experience I am confident you can rely on Cossins' info, and use it to save a lot of time – and be sure of making the most of your visit to any area.

> Suffering on the hills? Find out how to get lower gears to make climbing easier

The downside is you might have to stay a lot longer than expected to complete everything you want to, thanks to Cossins bringing so many worthwhile excursions to your attention.

Whilst Cossins and I seem to agree on what makes a good route, I am not so keen on his decisions about mapping: for each outing you get a 'drawing' with the start point and a squiggly line, accompanied by a brief description of the road numbers and other towns. 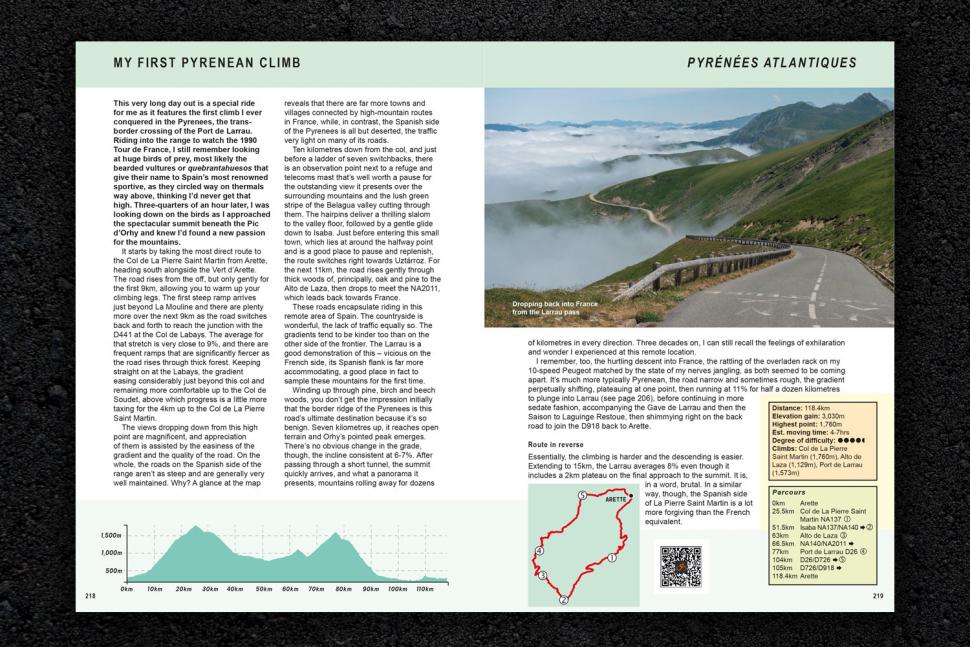 There is no usable map: you are expected to rely on a QR code for every route, which leads you to a .GPX file. Alternatively, they can be downloaded from here.

I prefer printed maps for some parts of the planning, then use a GPS when on the move (albeit with a printed back-up). I appreciate that most people will have access to some sort of electronic mapping, and that with a few clicks you can see the routes on a screen, but I'd still like to see this printed book feature printed maps.

At the very least I would like to see a small-scale map of the whole area, just to have a readily accessible way of seeing things in context. If you know the areas well it might not matter, because you would recognise the few place names provided - but I would have to do extra work to achieve that.

The Pyrenees are not as accessible to Brits as the Alps are, and those that do venture further south will rightly focus on the Col du Tourmalet and Col d'Aubisque first: a book like this should encourage more cyclists to experience the challenges of the area, and in particular to enjoy the lesser-known alternatives.

Make and model: A Cyclist's Guide to the Pyrenees by Peter Cossins

Award-winning author Peter Cossins' A cyclist's guide to the Pyrenees details the best road cycling routes on both the French and Spanish sides of the 600km-long Pyrenean chain, as well as in Andorra.

The routes range from 50-kilometre loops passing some of the most extraordinary of France's Cathar castles to 200-kilometre Tour de France-like epics over several passes. It not only includes renowned ascents such as the Col du Tourmalet, the Col d'Aubisque and Plateau de Beille, but also lifts the lid on hundreds of climbs large and small across the range, highlighting points of historical significance and the best roads on which to tackle them.

From newcomers venturing into the high mountains for the first time through to very experienced cyclists aiming to push their limits and explore new terrain at the same time, there are dozens of routes for riders of every level, in every part of the Pyrenees.

A cyclist's guide to the Pyrenees is beautifully descriptive, has easy-to-follow practical information, with every route downloadable via a QR link.

Title: A Cyclist's Guide to the Pyrenees

A reasonable amount of full colour images, and a 'flexibound' semi-rigid cover.

The lack of usable maps.

Would you recommend the product to a friend? Only those going to the Pyrenees...

This is probably the most cycling-specific and locally-informed source of knowledge about the Pyrenees available (in English), but it's handicapped by the lack of printed maps.