We're fans of B'Twin's Triban bikes here at road.cc: they're great affordable road bikes, and the Triban 540 was our sub-£1,000 bike of the year for 2017. When we were out in Lille at the B'Twin global HQ last week we snuck a look at the new range, and we're glad to report that it's more of the same: well specced bikes that look like a bit of a bargain. Let's start right at the bottom and work our way up. 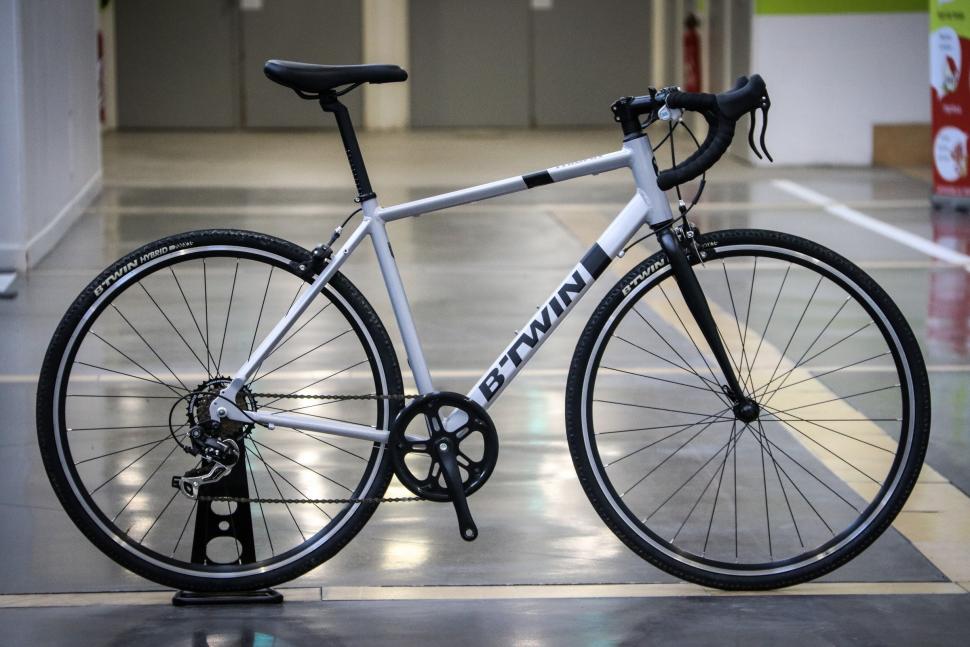 New for this year is the bargain-basement Triban 100. It's a basic machine but B'Twin have taken care to make sure that it's still a sturdy and reliable ride, and to that end they made Nicolas Pierron, the road bike product manager for B'Twin, ride the Roc d'Azur gravel race on one, in this exact spec. And it did the job just fine, apparently. You get a 1x7 transmission with a bar-mounted rocker shifter and a 14-34T cassette that gives a 242% range between top and bottom gear. That's not huge, but it should be fine for the kind of riding you're likely to buy this bike for: commuting, urban riding, leisure riding, that sort of thing. Not the Roc d'Azur, probably.

With long-drop calliper brakes and plenty of space in the frame you can fit biggish tyres to offset the firmness of the alloy frame and steel fork, and B'Twin spec 28mm rubber out of the box. As you can see from the pics though the frame and brakes will easily cope with a 35mm hybrid tyre that should be capable of mixing it up on the tarmac and smoother off-road paths. There's mudguard and rack mounts if you want to turn the bike into an all-weather workhorse. There's not many decent road bikes below £300, and this looks like a very interesting option if your budget is limited. It'll be available from March 2017. 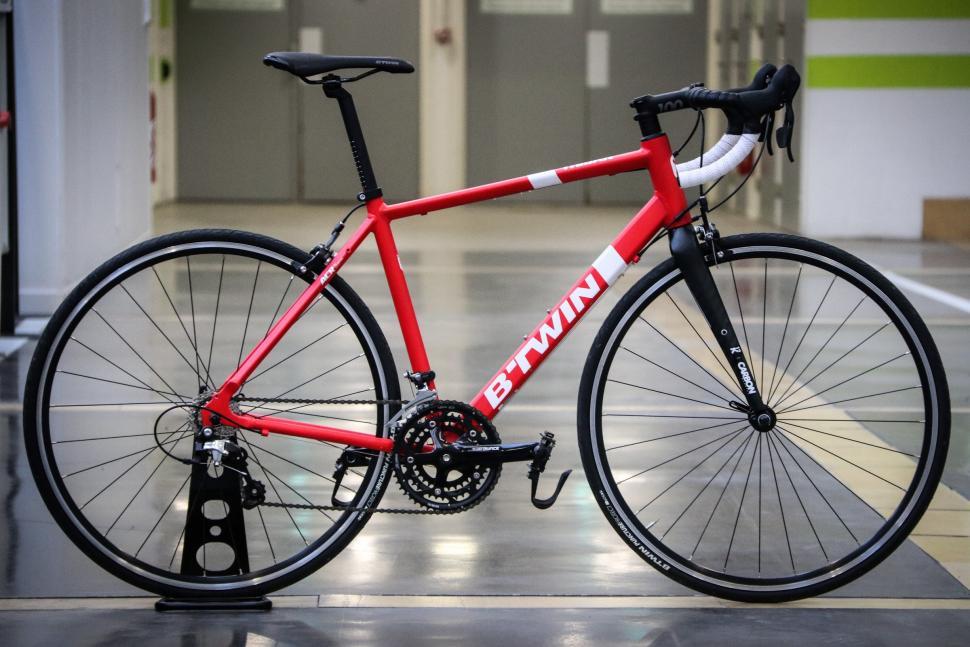 The Triban 500 shares the new lower-end frameset with the Triban 100 but the similarity ends there: the 500 is a full-spec road bike with a triple chainset transmission and a carbon-bladed fork. For just £330 that's not to be sniffed at. We've tested a previous version of the 500, the 500SE and Steve Worland gave it the big thumbs up: “Its ride feel is amazingly sprightly and its component parts are far better than average at this price”, he said. That bike remains in the range, even cheaper at £299, until it's sold out. This new 500 has a redesigned frame and shares a similar spec: Microshift transmission, carbon-bladed fork, decent finishing kit.

Microshift make a range of transmission parts and their integrated brake/shifter levers for road bikes can be had a bit more cheaply than their Shimano equivalents at the lower end of the market. The Prowheel triple chainset is a budget option too, but all of the bits bolted on to the Triban 500's frame are decent enough: there's nothing that won't do the job it's been given, and as such it's a very solid spec for an entry-level road bike. Some bits are better than previous years: you get B'Twin's Ergofit saddle and 100-series alloy cockpit. You can have it in black or red, and it'll be available from March. 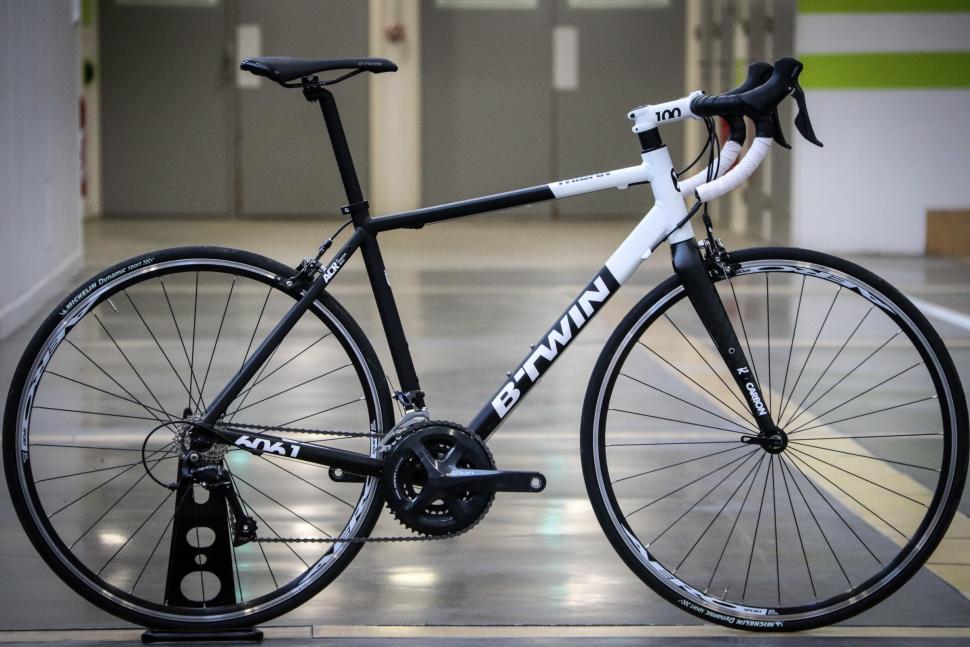 Here's an entry-level road bike that's so competent I have in the past attempted to stay in a 3rd cat criterium race on one. Yeah, yeah. I changed the wheels. Anyway, I did manage to stay in. This bike is built around the same frame as the previous model.

The wheels are one of the things that have changed. The old wheels were decent, to be honest. But the new ones get sealed bearing hubs and so they're better, for the same money. That's A Good Thing.

Another thing that's changed for the better without getting more expensive is Shimano Sora. It's still nine-speed but the chainset now uses the four-arm design that's trickled down all the way from Dura-Ace, and the lever shape apes the more expensive groupsets too. New Sora is really, really good for the money and it looks the part too. You can still get a triple chainset (105 and above don't offer one now) and this bike uses one with a long-cage rear mech for a really good spread of gears. For £479 this, again, looks like a really good buy: it has been in the past and there's no reason to suspect the 2017 bike won't be.

The 520 also comes in a women's build (520W) with a shorter reach and women-specific ergofit saddle. The ladies also get a better-looking paint job, with shiny silver and white replacing the white/black. It's not an easy thing to photograph but looks cracking in the flesh. Both men's and women's bikes will be available from March. 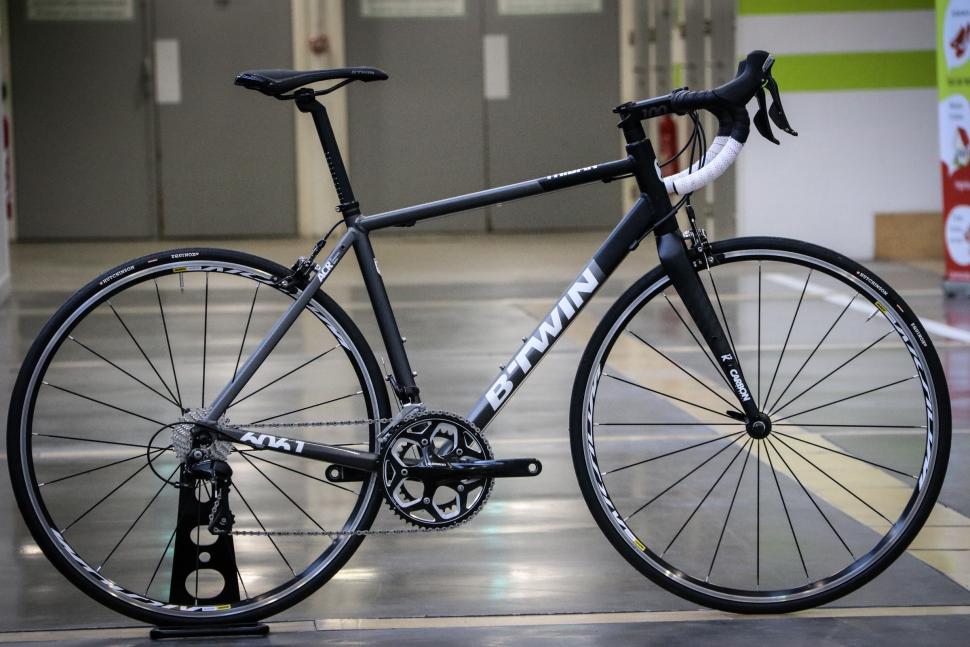 The new version of our Sub-£1,000 Bike of the Year gets a higher-spec Shimano FC-500 chainset but aside from that and the colour it's basically unchanged, and there's not much that needs changing. “This is a great buy for those new to road bikes and those looking to their next cycling challenge”, we said about the 2016 bike, and the 540, like all the the B'Twin bikes with steel or alloy frames, gets a lifetime warranty on the frame, fork, stem and handlebar. It's available for this season in the black/grey pictured (from March) and also red/blue, available now.

We didn't see this bike, because there's currently only one in the world and it was back in Decathlon's Surrey Quays UK headquarters. That's because it's a build that B'Twin have been working on specifically for the UK market. Here's a video walkaround of it though from Decathlon's UK cycling manager Peter Lazarus:

What you'll get is a carbon frame and fork with a Tiagra 10-speed groupset, for £799. That sounds like some serious value. The bike has been designed with a compact frame, and B'Twin reckon it'll be a perfect all-purpose carbon bike for everything from commuting to sportives. Obviously we'll reserve judgement until we've actually seen one, but it sounds like a great addition to the Triban range. It should be available in store from April.

There's a new range of leisure bikes coming from B'Twin too, the Riverside series. The range includes the Riverside 900, which will retail for £349. All the bikes use the same frame; the 900 has a B'Twin branded Microshift 1x8 drivetrain with an 11-40 cassette which should give plenty of range.

The Riverside 900 gets a SR Suntour lockout fork, 700x38 all-purpose tyres and hydraulic disc brakes. It looks like a nicely-specced town and towpath bike for general larking about if you're more at the leisure end of the riding spectrum.