DT Swiss has been on a bit of a charge recently, with the PR 1400 Diut OXiC and ERC 1100 Dicut wheels impressing highly. Far from putting their feet up and taking it easy, the company has been really busy and today unveils no less than ten new wheelsets split across two categories.

The new ARC 1100 Dicut wheels are all about optimum aerodynamics and are available in three rim depths - 48, 62 and 80mm with rim and disc brake versions.

- The pros and cons of carbon fibre wheels 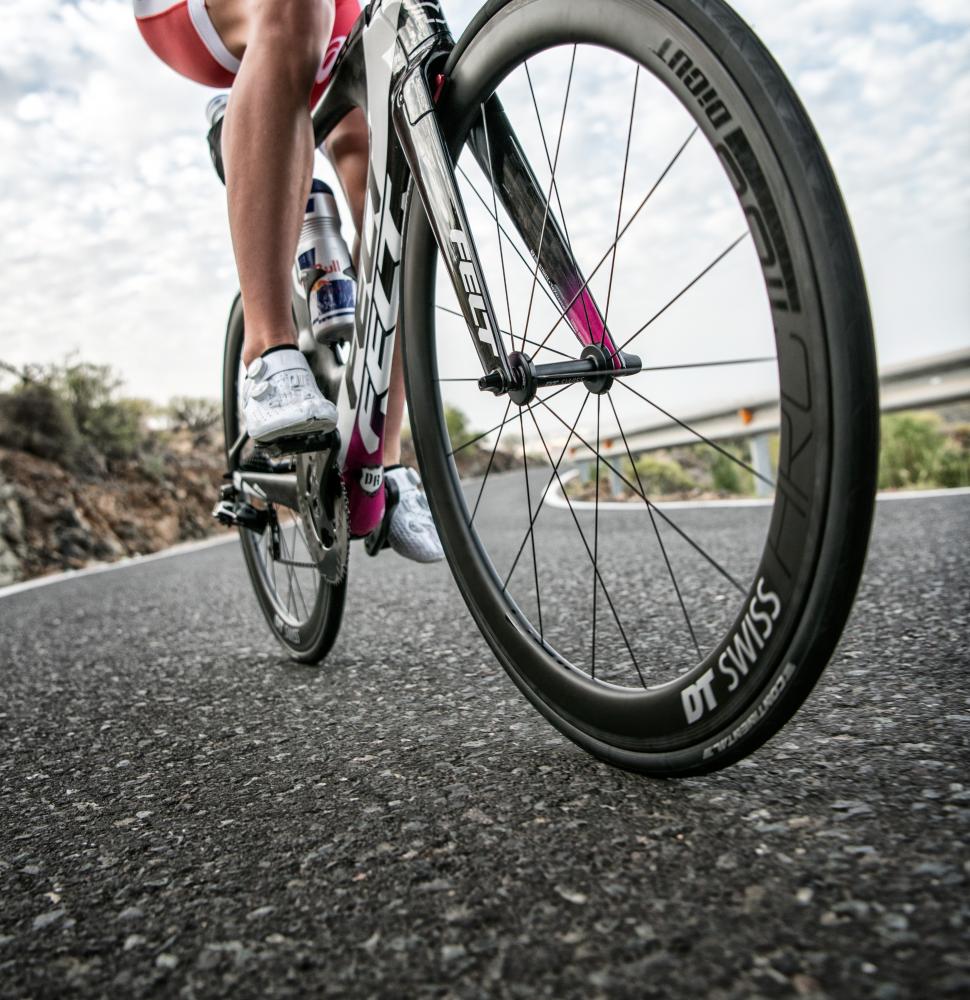 These wheels were developed with Swiss Side which helped it to “exploit untapped potential” in rotational drag, which apparently makes up 25% of the real-world aerodynamic drag that is not measured in a windtunnel. Rotational drag is the friction between the wheelset as it passes through the air. This is not the first time DT Swiss has worked with SwissSide, it previously partnered with the aerodynamic outfit fo the development of the ERC 1110 Dicut endurance disc wheelset last year.

Rotational drag “is one of the most unexplored performance factors in the aerodynamic optimisation of cycling wheelsets” says Swiss Side’s CEO and Technical Director Jean-Paul Ballard.

“Knowing that up to 25% of the overall wheel drag can be distributed to the rotational drag, it is one of the most underrated factors in the aerodynamic optimisation of wheelsets” he adds. 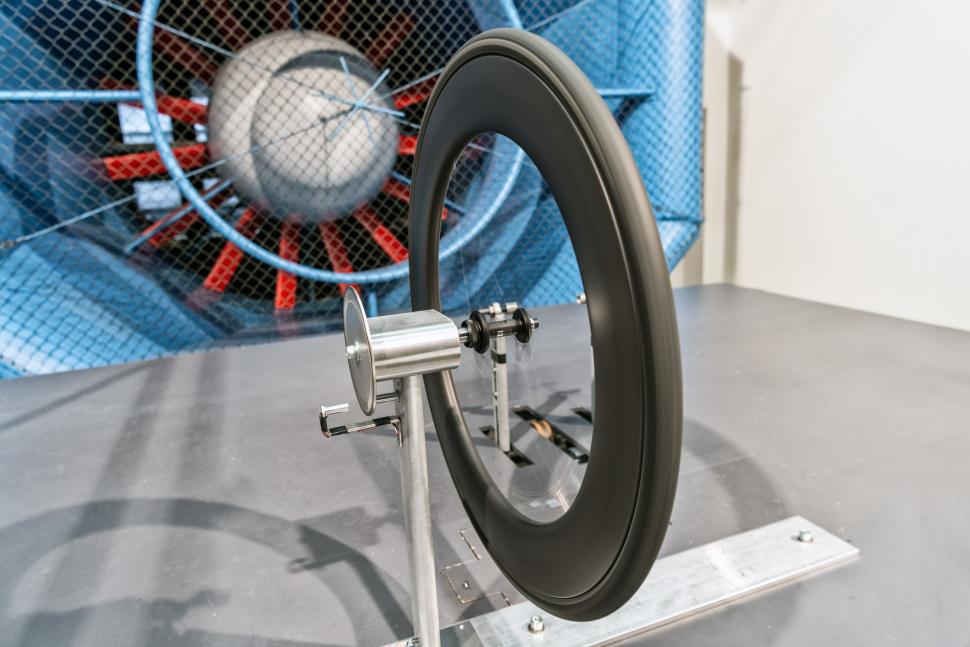 To test rotational drag, Swiss Side developed a special testing rig used inside a windtunnel which measures the deceleration of a wheel being driven manually at a speed of 60kph by using a light barrier. “The rotational energy can then be calculated through the decline of speed and the inertia moment of the wheels to the highest possible measurement precision,” states the company. 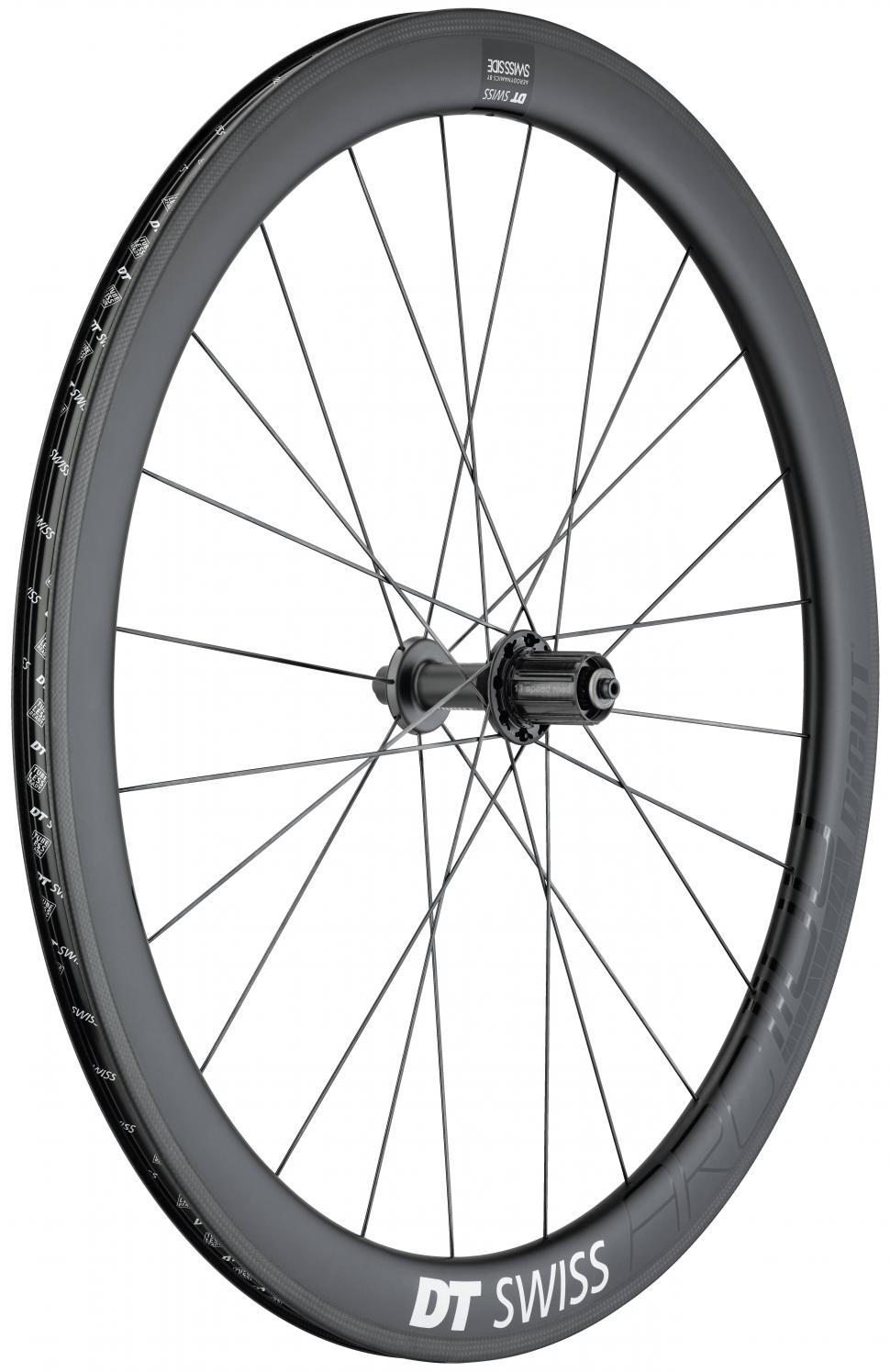 The three wheelsets are intended for different riding purposes. The shallowest ARC 1100 Dicut 48 is obviously the lightest option and uses partly bladed spokes and an aero hub for a lightweight build ideal for a wide range of conditions and terrains. 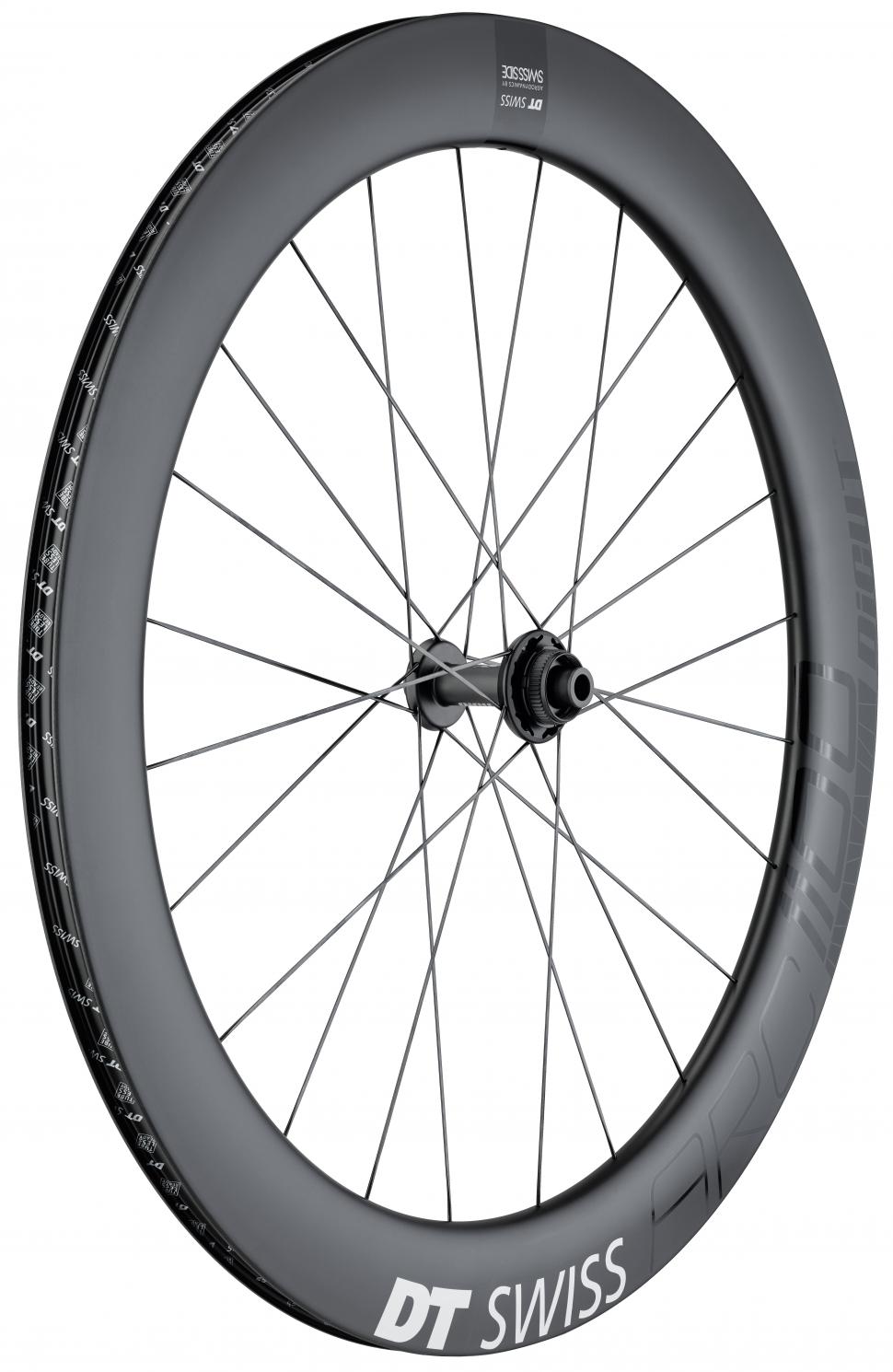 The ARC 1100 Dicut 62 is described as being ideal for long distance triathlons and flat stages of the Tour de France. It’s a category leader in low drag numbers the company confidently claims, and uses hubs with SINC ceramic bearings. 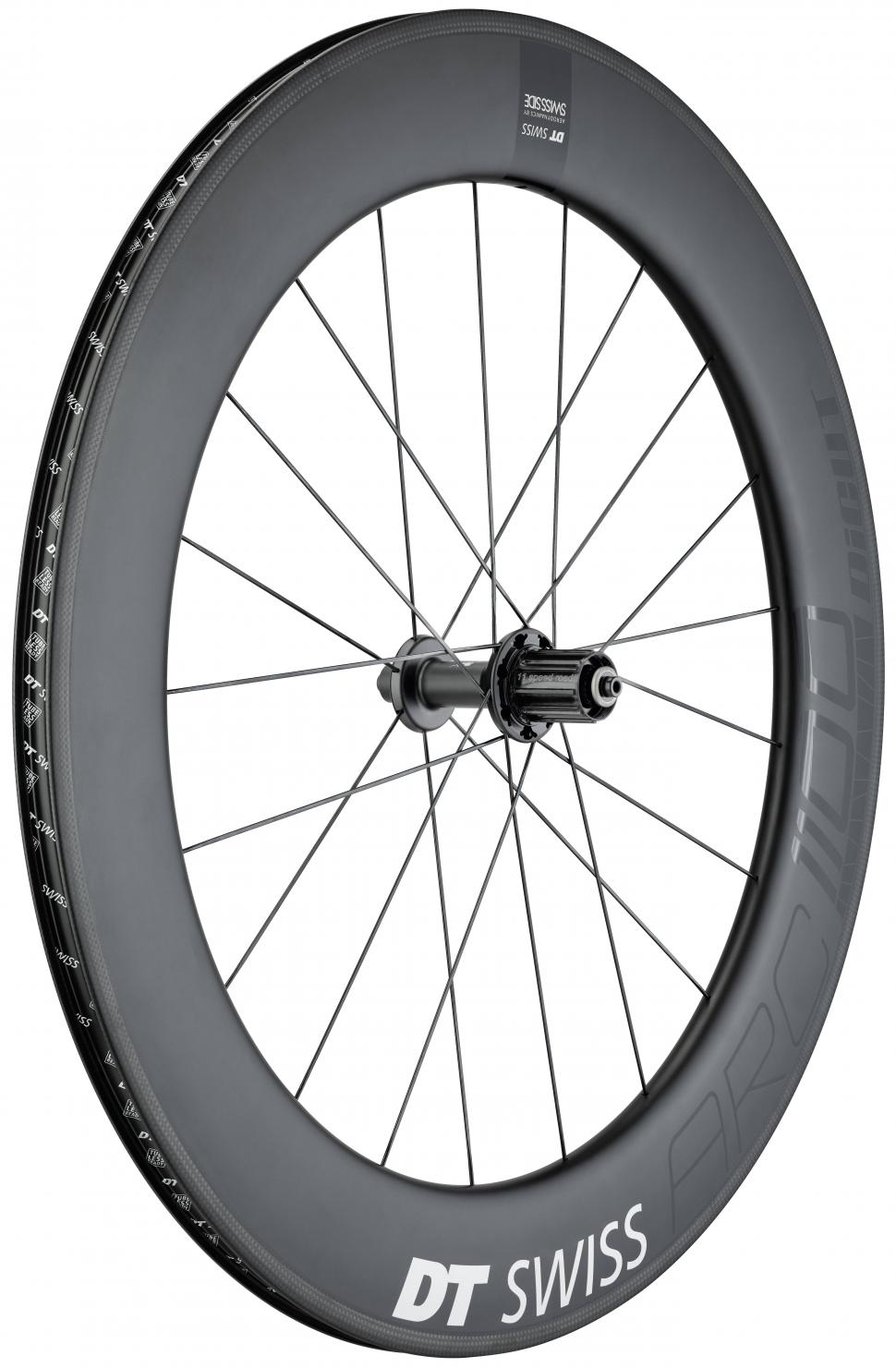 The most aero offering is the ARC 1100 Dicut 80 and is claimed to create a 10 watt negative drag in the right conditions. It also uses hubs with SINC ceramic bearings. DT claims this wheelset reduces drag by 10% compared to the Zipp 808 NSW wheelset when it tested it in the GST windtunnel in Germany, in a standalone front wheel rig.

Each rim features the same shaped profile and 17mm internal wide, and the rim shape is the same for the rim and disc brake versions. It’s tubeless-ready as well, and we’ve had positive results using previous DT wheels with tubeless tyres. Regardless of the brake version, DT Swiss has angled the brake track area of the rim to ensure the air remains attached to the rim for as long as possible

To reduce rotational drag, DT Swiss has also focused on the other parts of the wheel system. The Aero hubs are claimed to reduce drag by 2.5% compared to its regular Dicut hubs, spoke nipples are concealed inside the rims for another 4% drag reduction and DT Aerolite bladed spokes are utilised for a further 12% drag reduction. The RWS skewers feature removable levers which is claimed to reduce drag by a further 6% compared to having the lever installed.

There’s a lot of debate about the aerodynamics of disc brakes. DT Swiss tested its ARC 1100 Dicut 48 in both rim and disc brake versions and found a 2 watt difference, the disc brake rim producing slightly more drag at all yaw angles. DT puts this down to the larger hubs necessary for the disc brakes

The new wheels will be available in October. The disc brake wheels cost €2,408, the clincher wheels are €2,388, and prices are the same regardless of rim depth. There's a lot more information on the new wheels including the aerodynamic data testing at www.roadrevolution18.dtswiss.com/aero/

DT Swiss has also updated its performance line of wheels, with a new PRC 1400 Spine 35 replacing the previous RC38 Spline wheelset along with the existing PRC 1400 Spline 65. 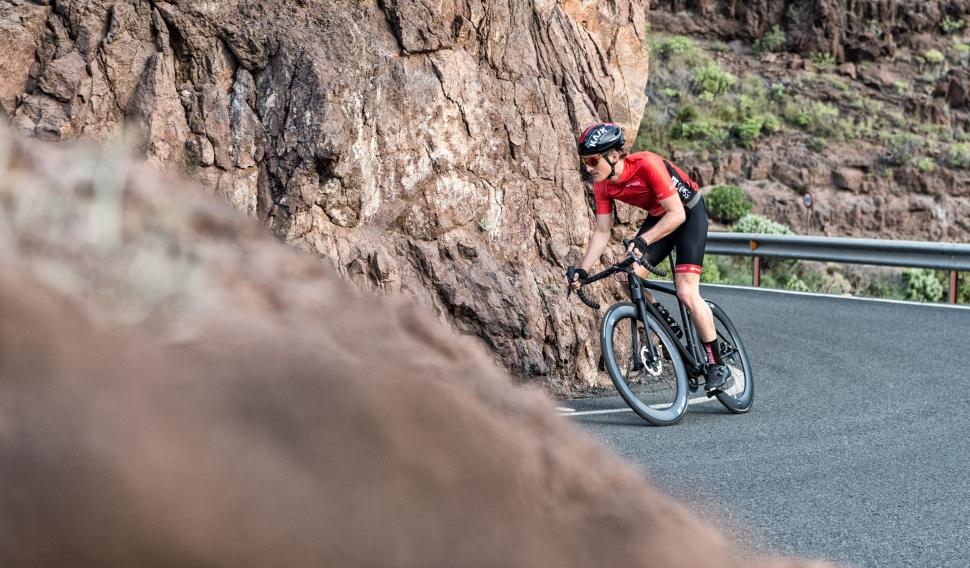 These wheels have been put through their paces with the Swiss-based IAM Cycling team and the 5-year sponsorship has led to some changes this year. There’s nothing like the countless hours of testing and high quality feedback you get from professional cyclists to advance product design.

The changes have focused on improving the stiffness-to-weight ratio and an improved carbon fibre layup to provide better and safer braking on long descents. It’s a case of small changes, such as the slight increase in the flange spacing to provide an optimal spoke angle on the driveside. 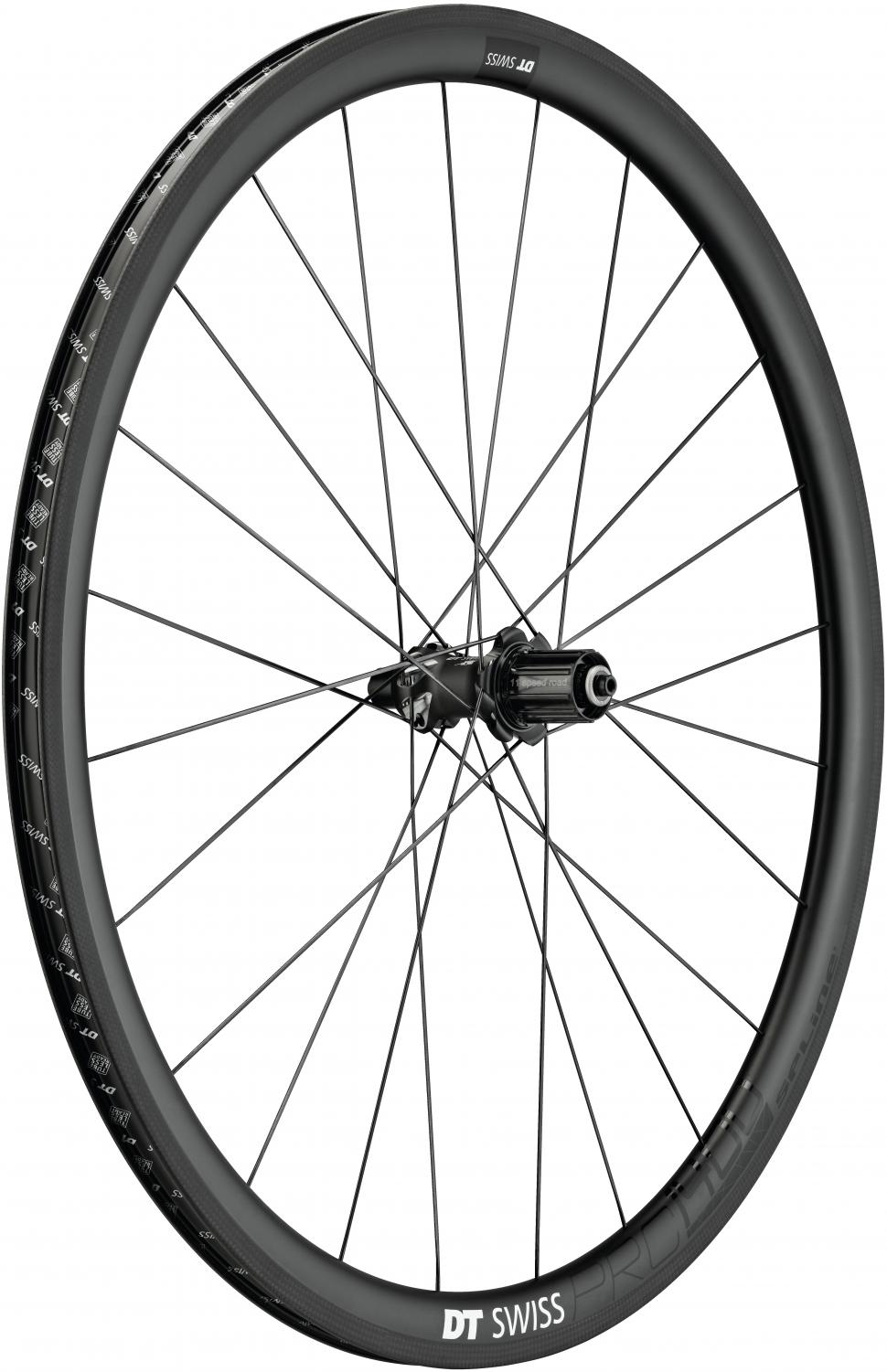 The rim profile has widened by 3mm and they’re 3mm shallower. These changes, along with the new hubs, has netter an increased side stiffness in the wheel, according to the company’s claims. The rims are made with a new resin which provides a 20% increase in heat resistance, which should lead to safer braking in the mountains.

AS with DT’s new aero wheels at the beginning of the article, you can choose from disc or rim brake versions of both wheels, with the disc versions offering with adaptable hubs compatible with thru-axles.

We'll hopefully be getting a ride on these new wheels soon. More at www.dtswiss.com