If you have your sights set on a titanium bicycle there’s a high chance Enigma is a brand that has passed through your crosshairs, and earlier this week Richard popped down to the office with a van load of brand new bikes to show us. Here then is a first look at the new Excel Disc, Evoke Disc, Escape and Evolve,

But who is Enigma? Enigma Bicycle Works has built up a solid reputation as purveyors of the finest titanium and steel frames in the 11 years since Jim Walker sold a bicycle distribution company and set out to create his own brand in the Sussex countryside. Despite the advances of carbon fibre titanium continues to be a popular alternative, despite its high price, famed as it for its fabled ride quality, unique aesthetic and legendary longevity. Buy a titanium frame and it might well be the last frame you ever buy goes the myth.

Enigma has become known for producing well-designed, executed and finished bicycle frames and it’s titanium, that hardiest of materials to work with and once the preserve of the aerospace industry, that it’s best known for. While the majority of the frames are made in the Far East, a growing percentage are actually made in the UK, with Jim’s son Joe Walker - and they’d happily make more if there wasn’t the shortage of skilled welders that there is in this country. A recent addition is an in-house paint shop that has allowed Enigma to step up not only its quality of finish but the variety of finishes it now offers. Anything is possible so Richard tells us. That also extends to the build options as well. 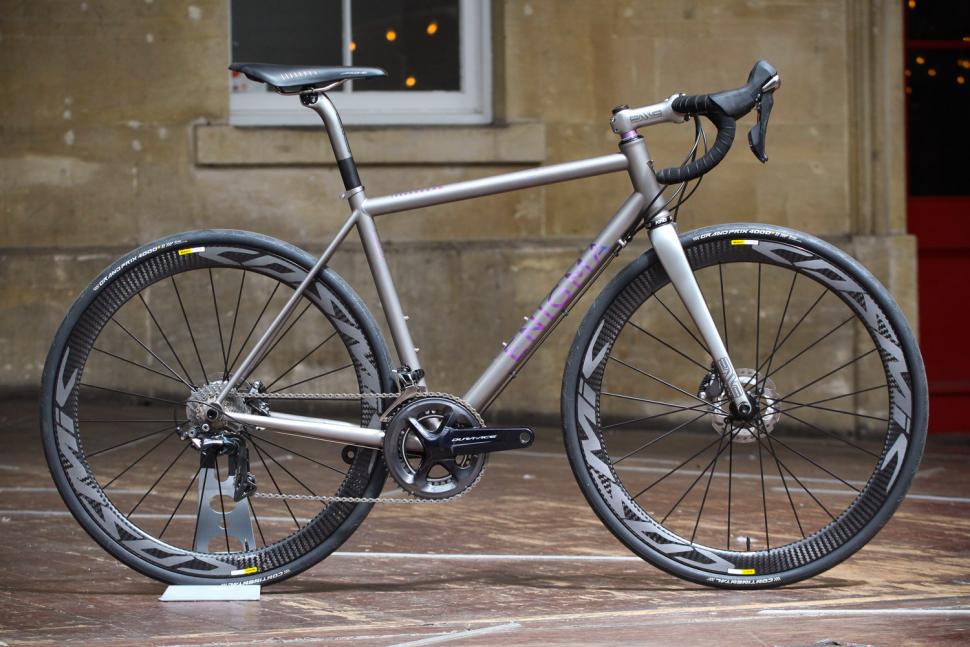 The Excel Disc is Enigma’s flagship road bike. Most titanium road bikes, and indeed the majority of Enigma’s range, is made from  3AL 2.5V grade titanium, but the Excel is made from 6AL 4V using a custom made tubeset that is welded in the UK. The key advantages are lower weight and higher stiffness compared to 3AL 2.5V. Enigma holds it up as the pinnacle of titanium frame design Updates to the new model include a new 44mm downtube, first used on its limited edition Exemplar frame last year, to better match the 44mm head tube. There’s a new beaded and anodized standard finish, or you can have a painted option with colour matched Enve fork as in the pictured bike. It’s a disc brake-only bike with 12mm thru-axles and flat mount and clearance for up to 28mm tyres. Such precision engineering and UK manufacturing don't come cheap though, and in this full Dura-Ace R9100 build with Mavic Cosmic Pro Carbon Disc wheels, Enve stem, handlebar and seatpost, it costs £7,799. Just the frame, Enve fork and Chris King headset will set you back £3,659, while the frame only is £2,999. Be warned, the lead time is 90 days on this model, due to the fact it’s made by hand in the UK. 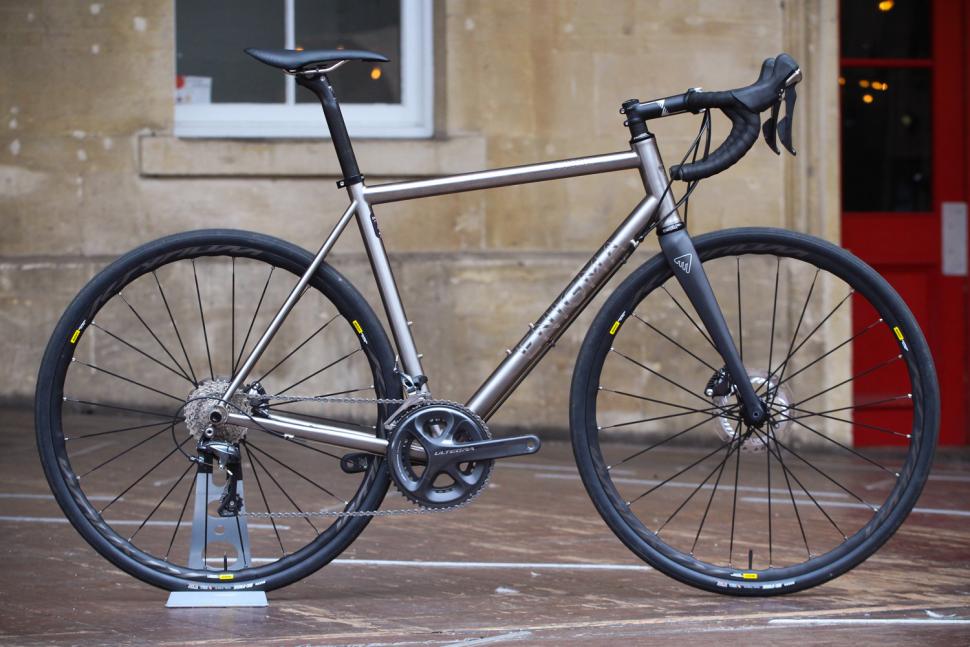 The Evoke is pitched as a “fast endurace machine” and uses a 3AL 2.5V titanium frame that has been updated with thru-axles replacing the previous bikes quick releases, and tyre clearance  increased to 32mm tyres - those are 32mm Maxxis Rambler tyres on the pictured bike that they fitted to test the clearance, we’ve got some there tyres we might sling on there to test. The bike uses the same front triangle, including a 44mm head tube and downtube, as the Evade I tested a couple of years ago. Enigma has adopted the latest flat mount standard and has spent considerable effort developing the non-driveside chainstay to accommodate the brake caliper and provide necessary heel clearance, without resorting to an off-the-shelf dropout with integrated brake mount, to do with reasons of aesthetics. The Evoke costs £4,199 with Shimano Ultegra mechanical, Mavic Ksyrium Elite Disc wheels and Enigma finishing kit, including new bar tape and saddle design, and this 56cm bike weighs 9kg on the nose. A frameset (including fork and headset), if you want to build your own, will set you back £2,136.99 and the frame only price is £1,750. The adventure bike market is blossoming and Enigma has replaced its Ecroix with the Escape for 2017. That’s no bad thing, we never quite knew how to pronounce Ecroix… The new Escape has been refined to suit adventure and gravel riding, and that means the geometry is more relaxed than the cyclocross influenced predecessor. So a lower bottom bracket, slacker head angle, increased fork offset, and increased tyre clearance to 42mm tyres. It’s disc brakes only, of course, and the Escape gets 12mm thru-axles and flat mounts. Last but not least, we arrive at the Evolve and a slightly more traditional looking road bike. This bike is the result of Enigma merging its previous Echo and Etape touring focused road bikes into one model for 2017. The Echo and Etape have been part of the company’s range since day one, so it’s a shame to see the names disappear, though we’re told there is an Etape Disc on the way soon…

The Evolve features a new tapered head tube and 44mm down tube intended to provide a more responsive ride. There are eyelets for racks and mudguards, making it an ideal choice for touring, Audax, winter training or commuting. Enigma is using regular short reach caliper brakes but there’s still clearance for 28mm tyres with mudguards. We reckon that’s as wide as anyone would want to go on this sort of bike anyway. It costs £2999 with a Shimano 105 groupset and Mavic Ksyrium wheels, while the frame only price is £1,499. There you go, the four new models in the Enigma Bicycle Works range. We’ve luckily been left with the Evoke and Escape to review so stay tuned for more info on those two bikes soon. You can see the full range at www.enigmabikes.com