A sneak peek at Decathlon’s 2019 disc-braked Triban bikes, plus 2018 performance bikes in carbon and aluminium

Decathlon has revealed plans for new bikes and accessories, including two new disc-braked models in the popular Triban range, plus updates to the sporty aluminium and carbon fibre Ultra bikes. We popped over to the launch in Barcelona to take a look. 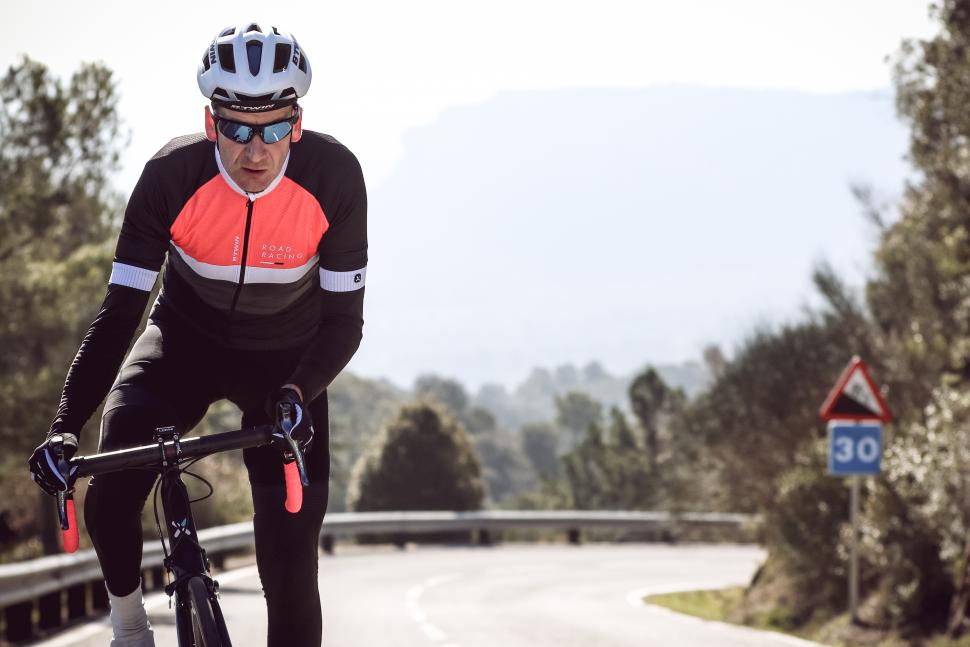 When you design and spec your own bikes, have literally hundreds of stores around the world, and are determined not to simply put your decals on other people’s designs, you have to plan new models well in advance. Your Treks and Specializeds are thinking well into the future too, but they keep their plans very close to their chests, whereas Decathlon is cheerfully open about its goals, which include becoming a very big player indeed in the global cycling scene.

Of the bikes unveiled in Barcelona, the two most likely to move Decathlon toward that goal are the new Tribans that will hit Decathlon stores around September. Let’s look at those first. 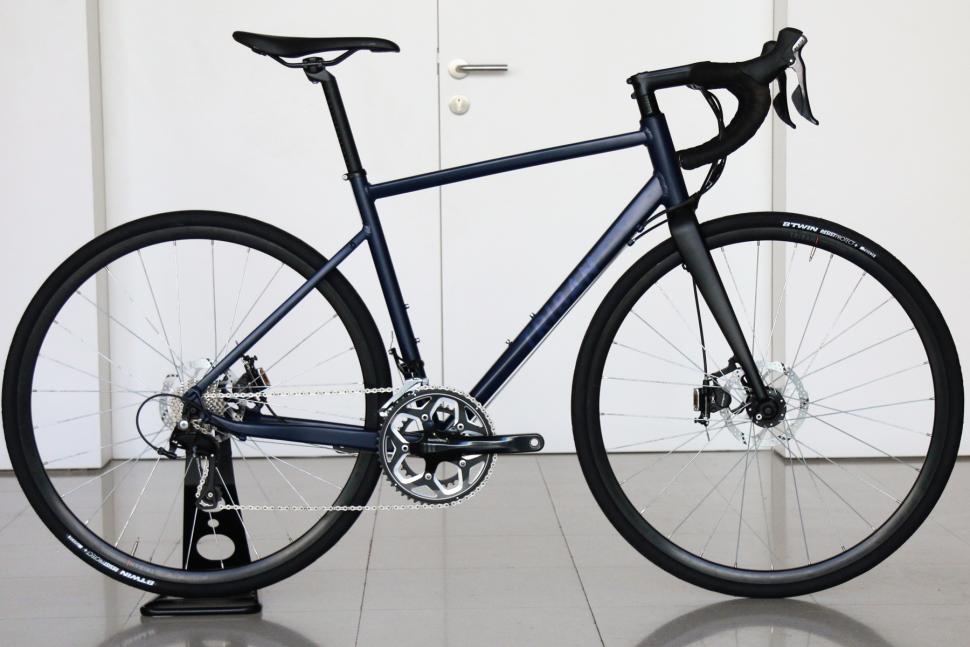 From the end of this year, Decathlon will start to phase out B’Twin as a bike brand. A new name for the sportier bikes has yet to be decided, but the popular entry-level Triban bikes will now simply be known as Triban, without the B’Twin handle.

The Triban Adept will replace the current Triban 520 and will have disc brakes, a new aluminium frame, clearance for 42mm tyres, eyelets for racks and mudguards and a wide-range gear set. It’ll cost £550-£600 and sounds like a sure-fire hit among commuters. 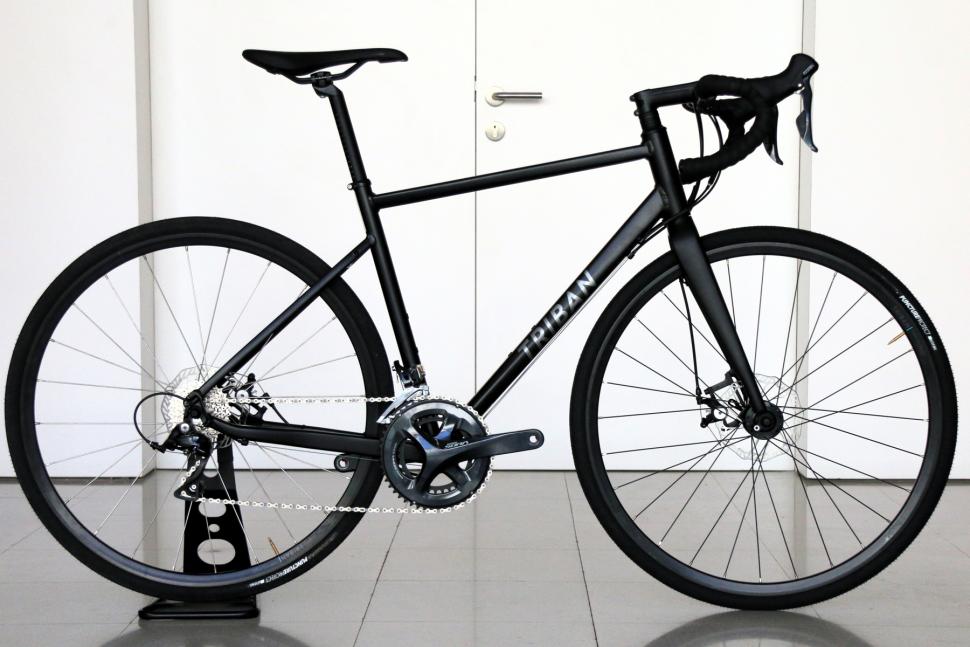 The Triban Adept Plus will have the same frame with a fit-out centred on Shimano 105 with HY-RD brakes, and will cost about £750. Both new Tribans will have Decathlon’s own puncture-resistant tyres and tubeless-ready Triban wheels, along with a new saddle, and a clever handlebar stem that will take slot-on mounts for accessories such as Garmin computers.

Moving on to bikes you can buy now or very soon, the latest versions of the four-bike Ultra CF race bikes all use the same lightweight carbon fibre frame and fork that Decathlon introduced in 2014, with claimed weights of 850g and 320g in size medium. For those who want a dependable, ride-all-day bike, there are two new disc-braked aluminium-framed bikes, the Ultra 500 AF GF and Ultra 520 AF GF. Meanwhile, long-standing value favourite the Ultra 920 AF has been updated. 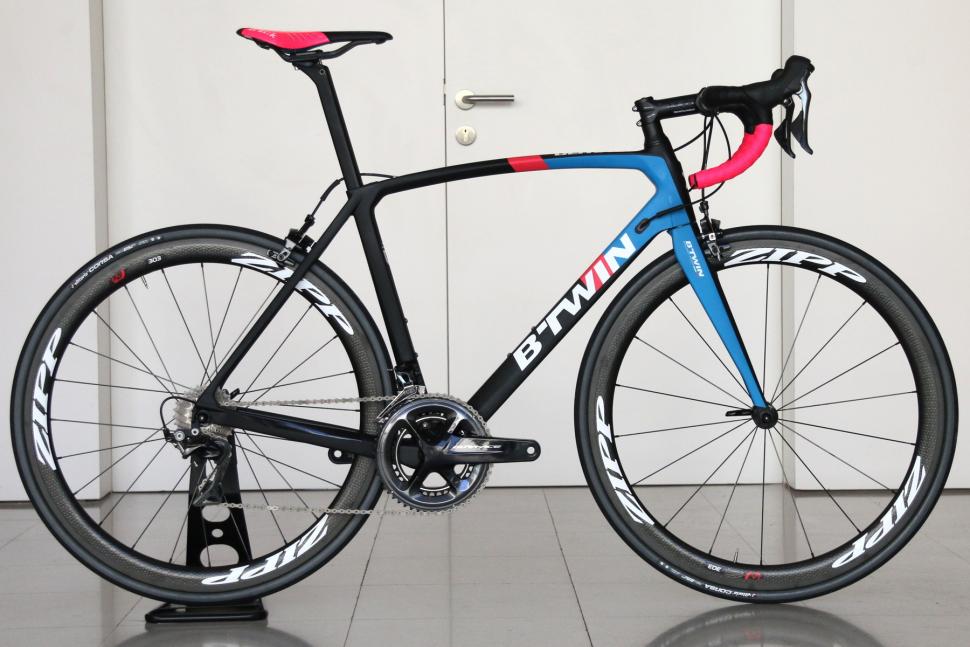 There are now three Shimano-equipped bikes in the carbon fibre range, starting with the 105-equipped Ultra 900 CF for £1,399 with Mavic Aksium wheels. The £2,299 Ultra 920 CF Ultegra has the new Shimano R8000 Ultegra groupset and Mavic Cosmic Pro Carbon wheels. At the top of the range, the Dura-Ace-equipped Ultra 940 CF comes with Zipp 303 carbon fibre wheels and a startlingly good finishing kit including a Deda carbon fibre handlebar, Vittoria Corsa tyres and a Fizik Antares R3 saddle, all for £3,500. We don’t know of a race bike with a similar level of spec for anywhere near that price.

Perhaps the most surprising addition to the Ultra CF range is the fourth bike, the Ultra 920 CF Potenza which will have a full Campagnolo Potenza groupset and Campagnolo Zonda wheels for £1,999. Potenza is supposed to be Campagnolo’s rival to Shimano Ultegra, but with Ultegra R8000 costing bike makers more than its 6800 predecessor, Potenza now slots nicely into the gap between Ultegra and 105. It works really well too. The Ultra 920 CF Potenza will be in the shops in mid-April. 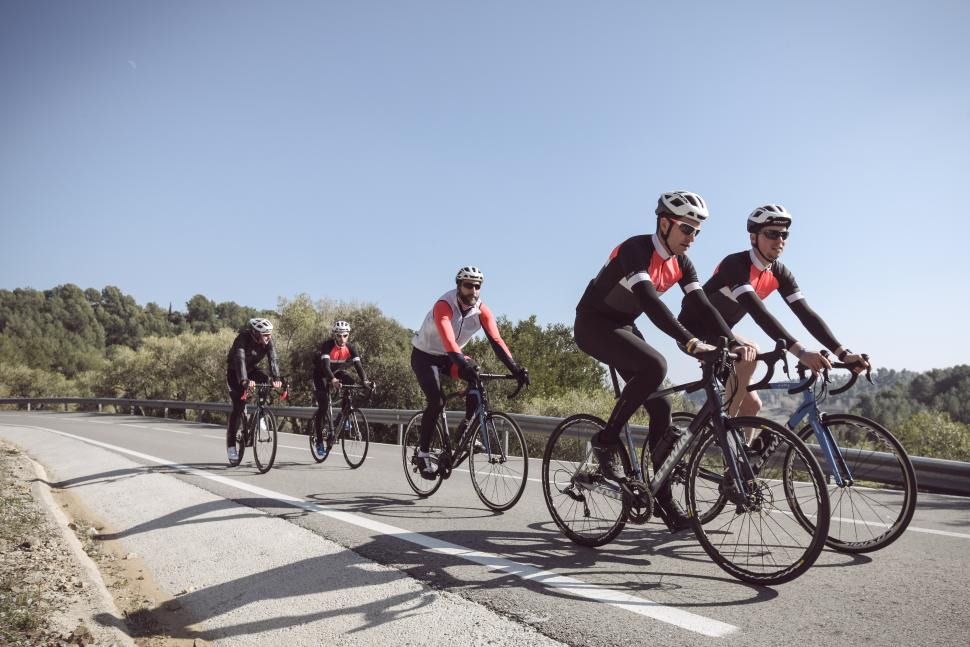 I was able to get out for a ride on an Ultra 920 CF Ultegra, on a loop that comprised 400m of climbing in about 12km, and then a twisty plummet back to the start. The Ultra 920 CF is a nippy climber; a smack on the pedals is rewarded with an eager surge forward. The shifting and braking of the new Ultegra R8000 components is superb, and stopping gets a boost from Decathlon’s use of a direct mount brake up front, giving a very firm feel.

The Ultra 920 CF demands your best game on descents. It loves to be thrown hard into turns, to the point where it’s initially a bit of a handful. I really needed more time to get used to it than a short descent afforded, especially when I was mostly trying not to get in the way of Decathlon’s UK cycling chief Peter Lazarus, and using the rest of my concentration to avoid exploring the slopes that dropped away beyond the road edges. That descent was still lots of fun, with the Ultra 920 CF urging me to go harder out of every bend. 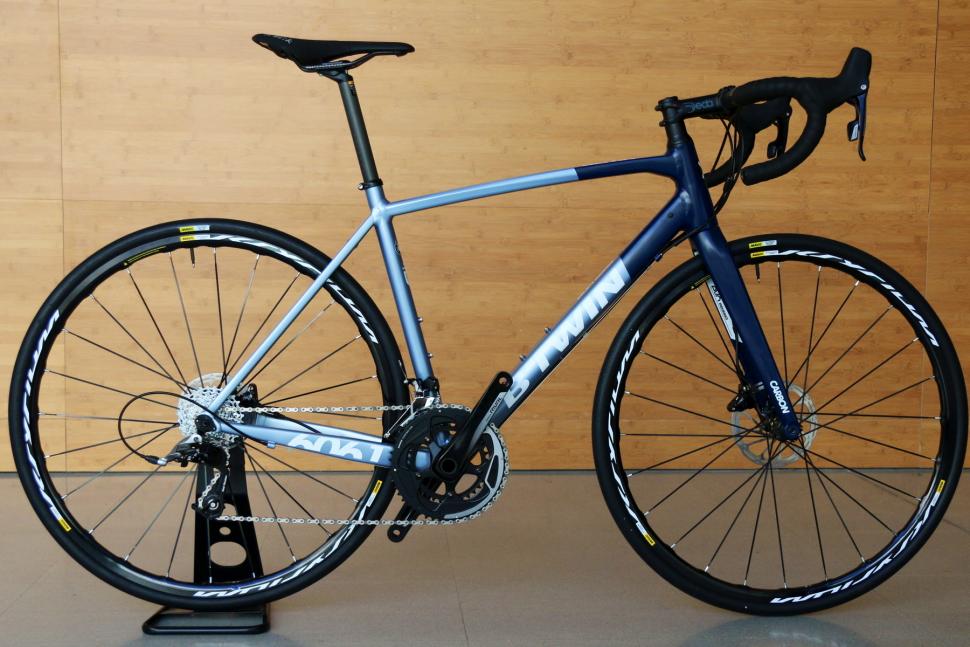 There are two new models under the heading of Ultra AF GF — the GF stands for gran fondo, designating these bikes’ intended use of long days out. Both bikes have butted aluminium frames with full carbon forks and front and rear through-axles. The cheaper of the two, the Ultra 500 AF GF has Shimano’s Sora 9-speed groupset with Shimano BR-RS305 disc brakes and Mavic Aksium Disc wheels and costs £899.

Another £400 gets you the Ultra 520 AF GF with SRAM Rival transmission and hydraulic disc brakes, Mavic Ksyrium Disc wheels and a Deda/Fizik finishing kit including a Fizik Antares R3 Endurance saddle. Slinging a leg over the Ultra 500 AF GF quickly reveals it to have exactly the handling traits you want for long days exploring tiny roads. It’s accurate but steady, leaning smoothly into corners and while it doesn’t leap uphill like the Ultra CF, it makes good progress and needs very little concentration to keep it going where you want it to. This is a lovely bike for enjoying the scenery as it unfolds below you. As I returned the bike I said "I really like that, but can I have it in carbon?"

"Give us another year or two," came the reply. See what I mean about not being exactly secretive?

The only obvious deficiency of the Ultra AF GF bikes is their lack of rack and mudguard eyes, an absence that’s down to the European market seeing a bike like this as more of a race bike than a practical machine. 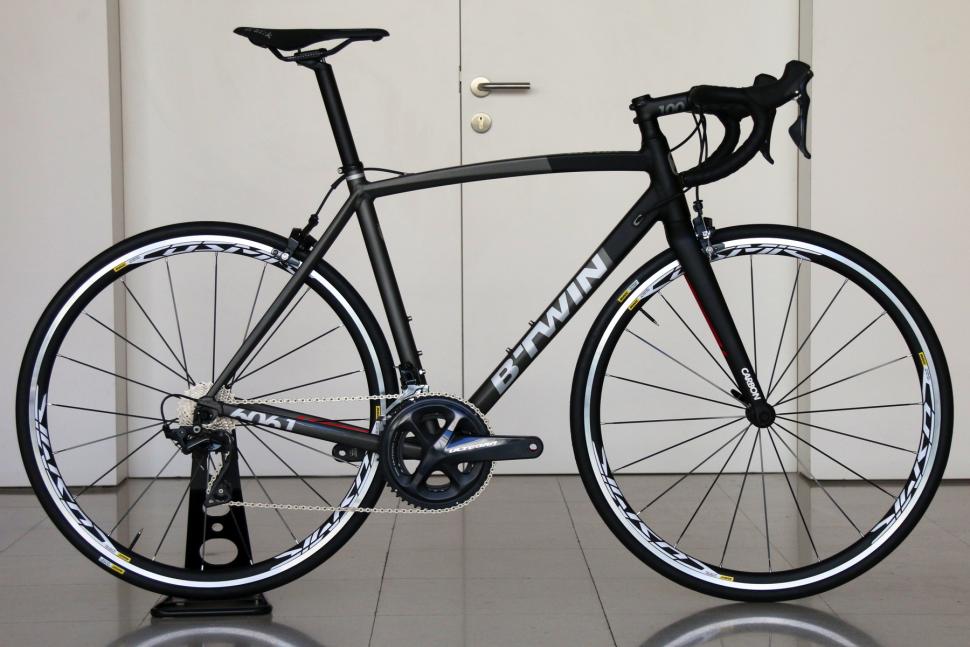 Previous aluminium Ultra AF bikes have come in for criticism for their rear brake placement. With the rear brake tucked under the chainstays, the Ultra AF bikes looked tidy, but tended to suffer from brake rub when you climbed out of the saddle, and the location is fiddly if you have to make brake adjustments.

For 2018, the new Ultegra R8000-equipped Ultra 920AF has the rear brake up on the seatstays. It’ll be available at the end of March for £1,299. The current 105-equipped Ultra 900AF will carry on using the chainstay brake placement until some time around the end of summer 2018. 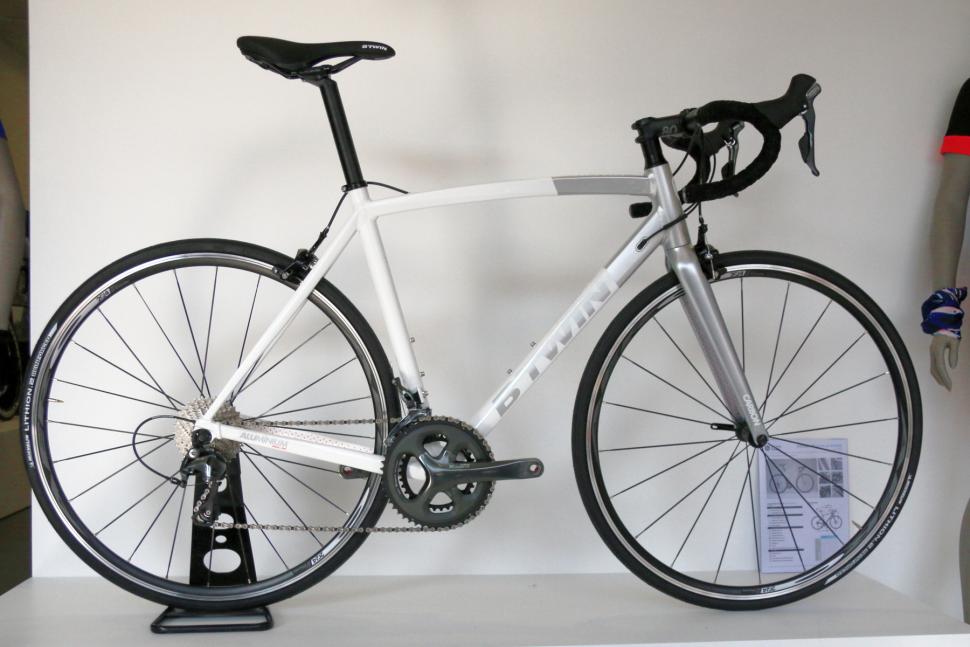 In early October 2018, Decathlon will launch a women’s edition of the Ultra AF with a complete Tiagra groupset. The frame will be the same as the men’s bikes, but with stem, bars and saddle tailored for a woman’s anatomy, including a saddle developed by Decathlon’s own in-house team of female riders. It’ll retail for about £799 in sizes XS, S and M, which Decathlon says will fit women from 150cm to 175cm tall. 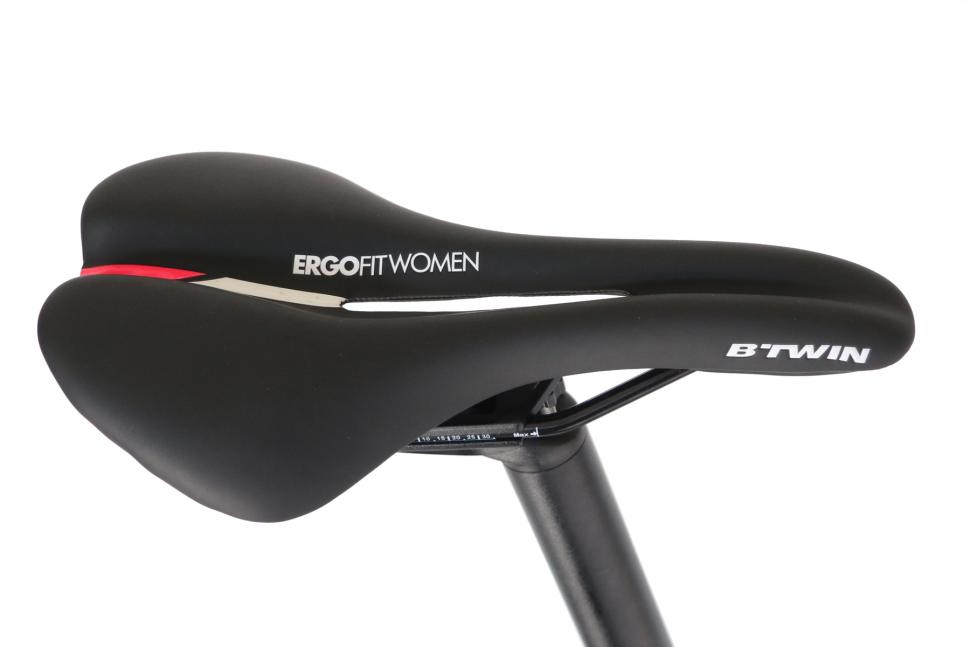 There are two new road shoe models, both made for Decathlon in Italy.

The new version of Decathlon’s entry-level shoe, the B’Twin 500 (below), is already available for £49.99. Compared to the previous version it gets a fibreglass-reinforced sole instead of one made from straight nylon, and drillings for two-bolt SPD cleats as well as three-bolt Look-style cleats. There will eventually be six colour options, including white, navy blue and red, but at the moment Henry Ford’s famous quip applies: any colour you like as long as it’s black. 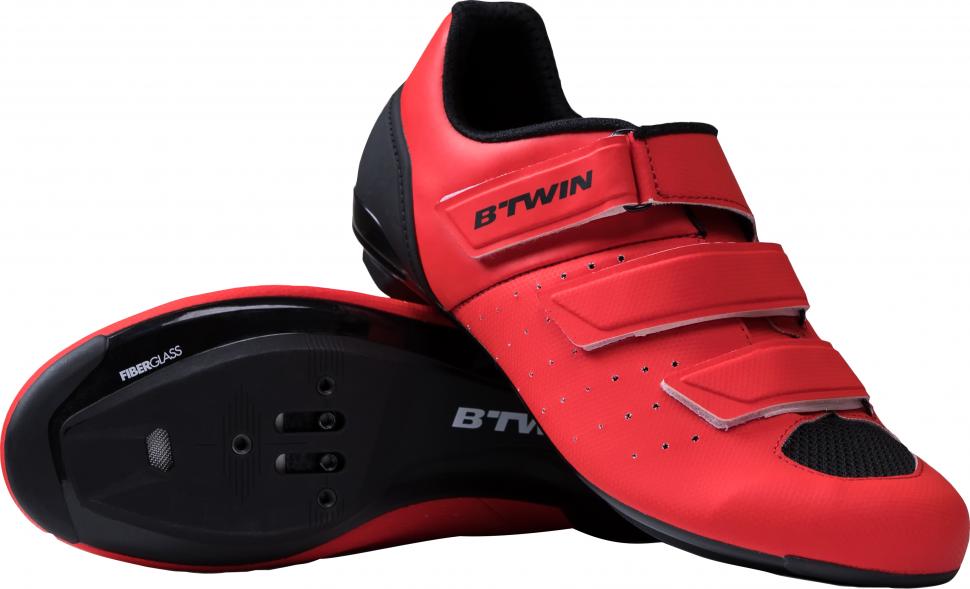 The new 900 model road shoe (top) looks like a lot of footwear for a modest price. It has a ventilated, full carbon fibre sole, twin-dial closure, perforated upper and lots of clever detail, such as quick-drying materials so they won’t stay soggy for long if it rains, and a channel in the heel padding to reduce irritation to the Achilles tendon. Unlike many Italian-made shoes it has a medium-width fit that’s a bit higher and wider in the toebox. They’re expected to be around £120 and to be available in late September. Decathlon’s bike clothing has always been terrific value for money, but, well, let’s just say the styling hasn’t set the world alight. That’s set to change with a range of new garments with tasteful, slightly retro styles for men and some striking patterns for women. 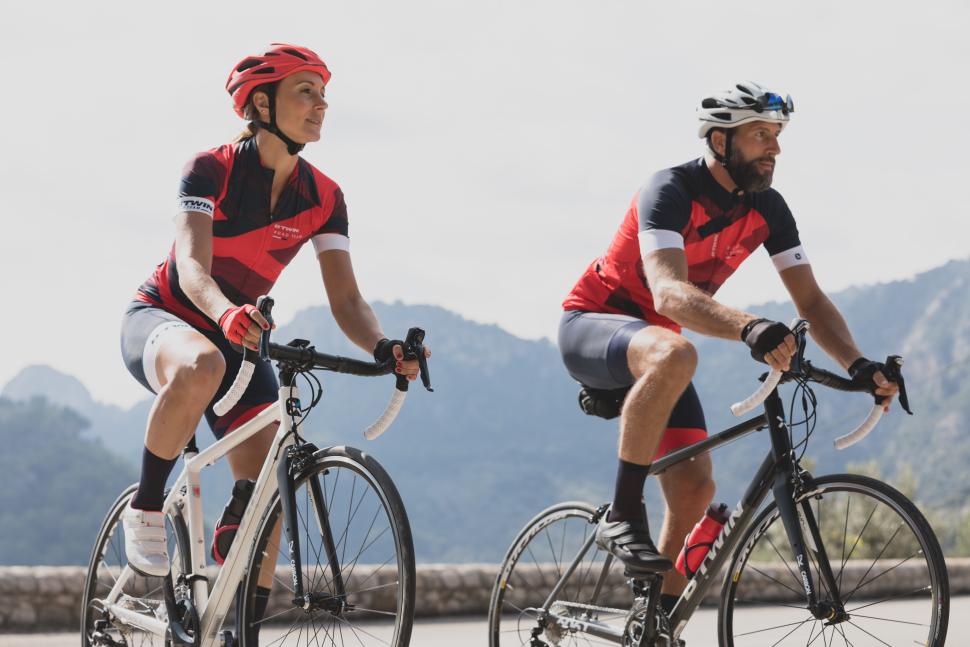 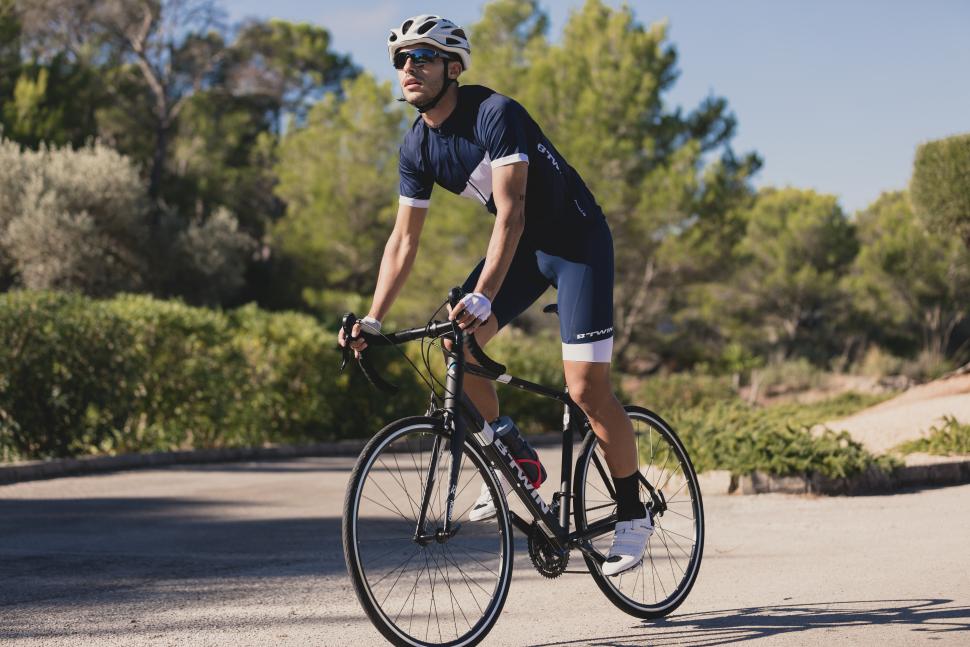 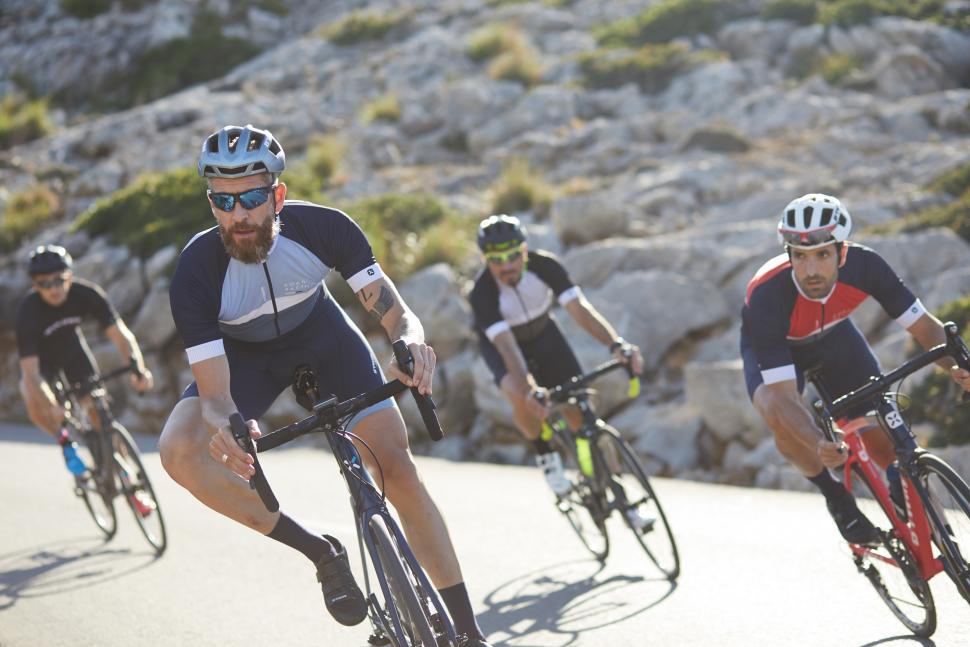