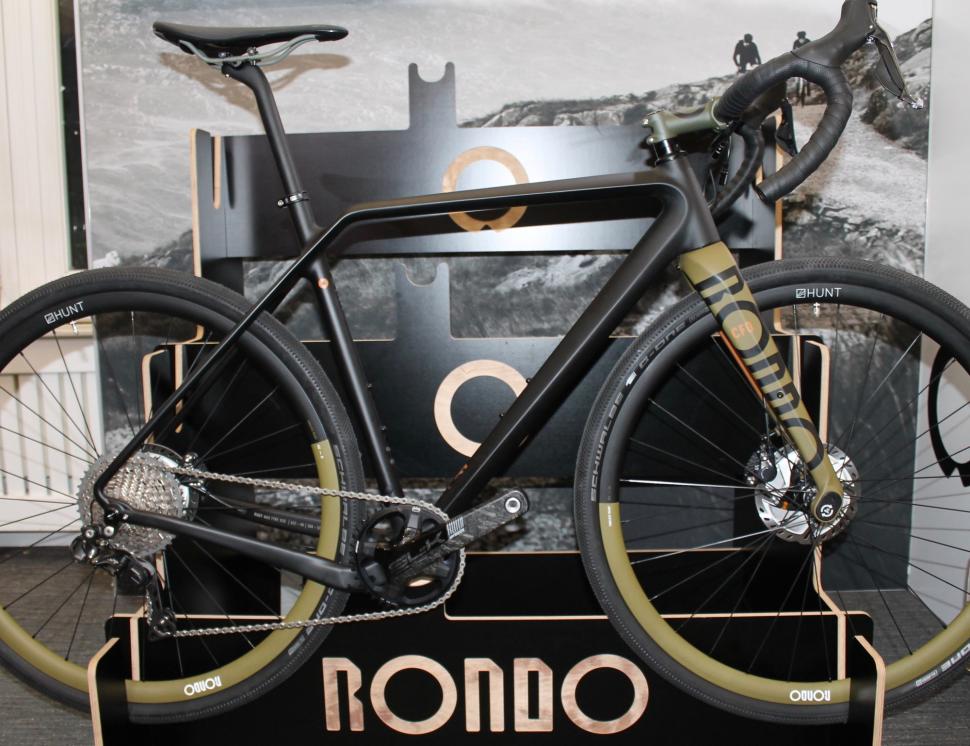 The Corebike Show brings together some of the UK's biggest brands and distributors to show their latest products, and we spent yesterday hunting out the very best of them. This year's show saw more gravel/adventure/road plus bikes and components than ever before, so let's start there.

First a quick disclaimer: we didn't get around the whole of Corebike Show yesterday. We didn't get the chance to check out important new models from Kinesis, for example, so we've sent a crack squad back to Core today to round up everything that we missed.

One other disclaimer: photography at Corebike show is notoriously tricky because it's set in a series of relatively small rooms, some without any windows, so cut us some slack on that one, please. 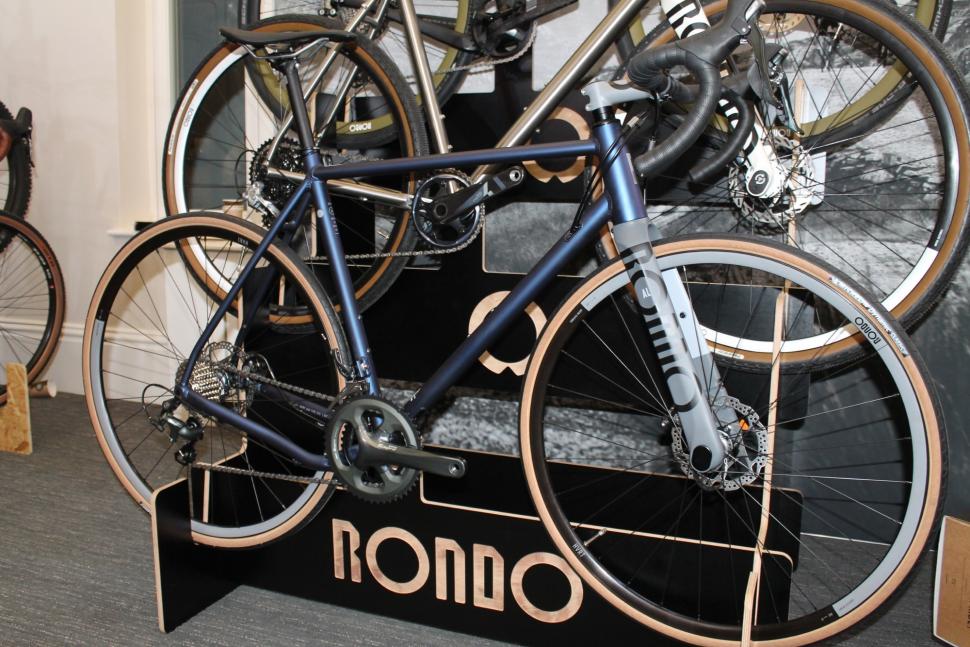 Variable geometry? That's courtesy of the TwinTip carbon-fibre fork where you can change the position of the inserts at the end of each leg.

"The first setting with steeper angles, smaller trail and a lower front will be the choice for racing," says Rondo. "The alternative fork setting, that fits big tires and/or fenders, with slightly slacker angles is ideal for harsh, long endurance rides." 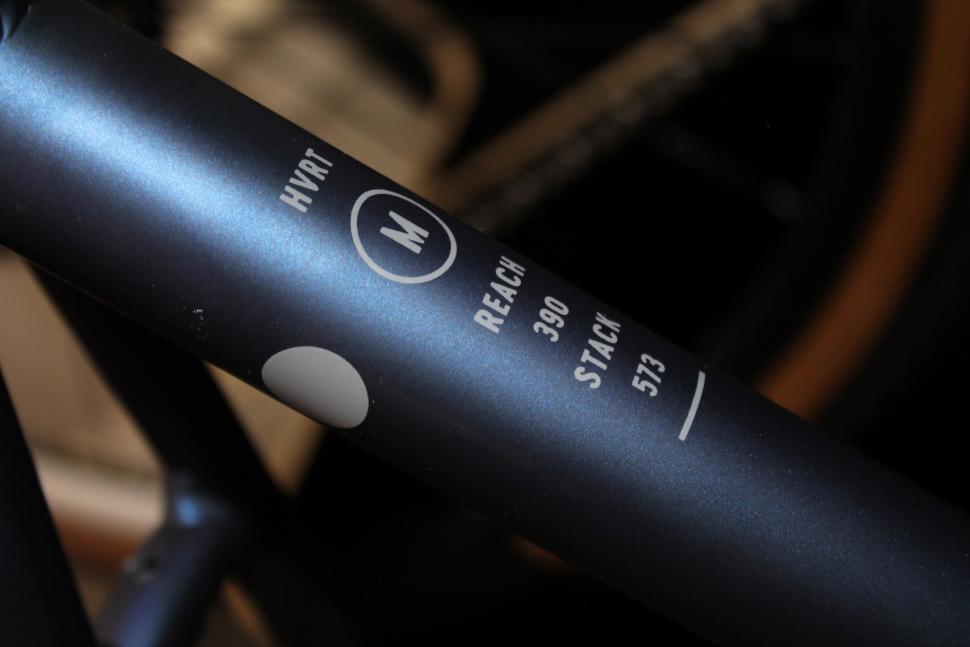 The frame is 6061-T6 aluminium alloy with a dropped chainstay on the driveside to allow for good tyre clearance and adequate chainring clearance while keeping the chainstay short. The Ruut CF 0 is much more expensive at £5,299.99. This model comes with a carbon-fibre frame and, like the HVRT, a variable geometry through its TwinTip carbon fork. 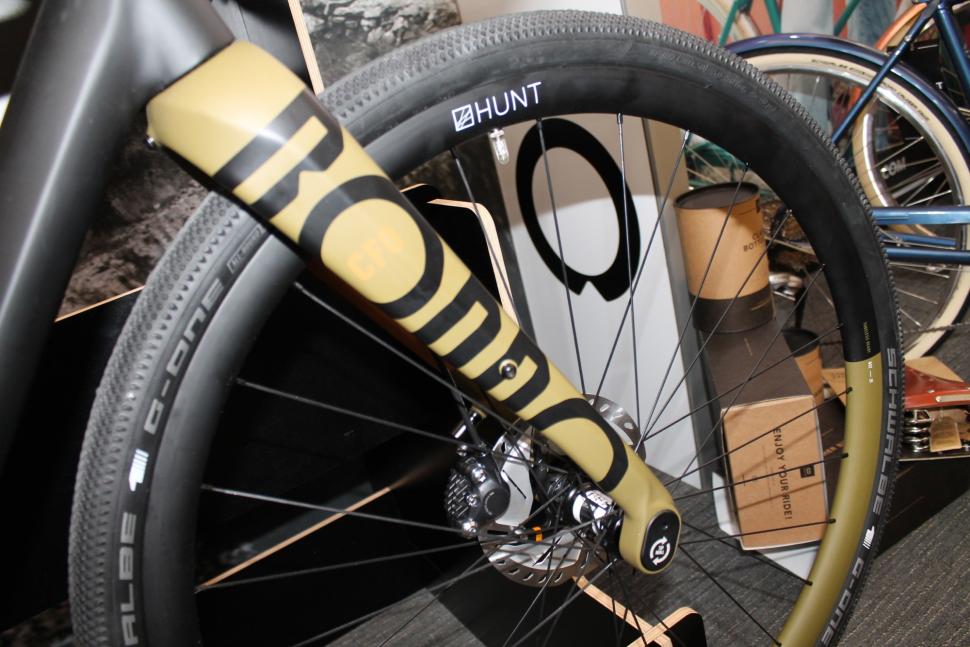 Although compatible with a double chainset, this version is set up with a 1x system with Hunt carbon rims on DT hubs. 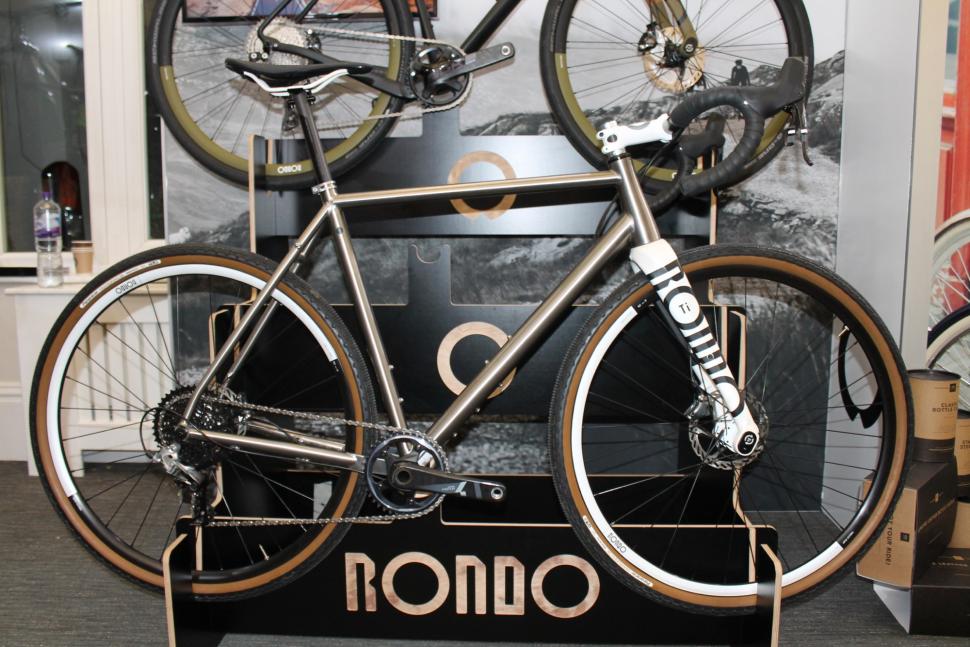 The Ruut CF Ti (£4299.99) is built around a 3Al-2.5V titanium frame, again with a variable geometry TwinTip carbon fork. There's some serious engineering going on behind the bottom bracket. 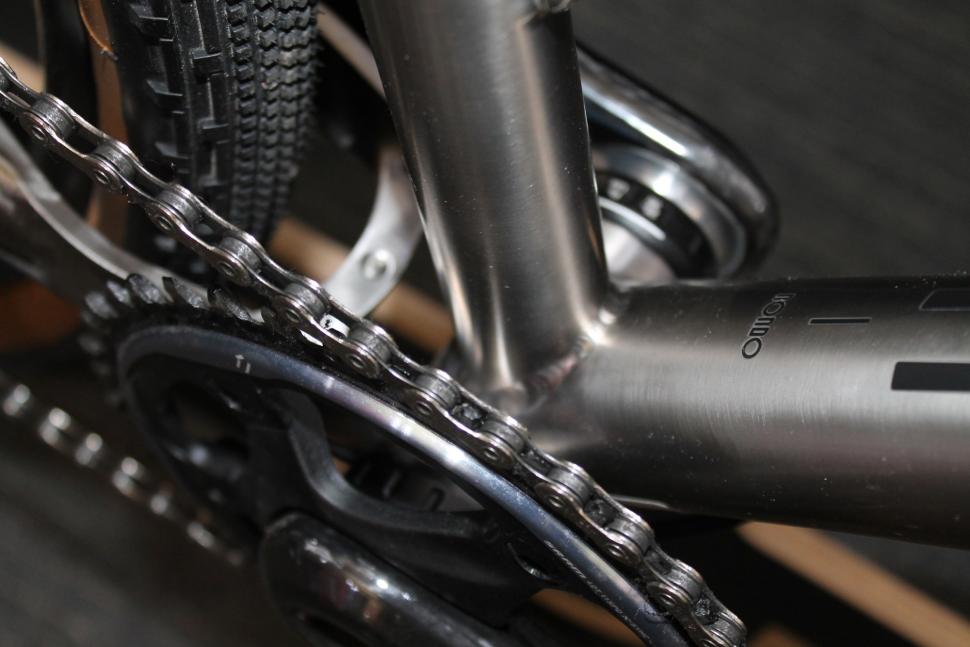 It's a really good looking option with mudguard and rack mounts and built up with a SRAM Force 1x groupset. Like the Ruut CF 0, it'll take 40mm tyres on 700c rims, or 57mm tyres on 650b. We reviewed Forme's Monsal last October and rated it in the top five gravel and adventure bikes of the year. The Monsal is now being joined in Forme's range by the Monyash, a bike with a smooth welded 6016 aluminium alloy frame, a full-carbon fork, and thru axles front and rear. It is intended to straddle the line between tarmac and gravel and be functional in UK conditions, coming with an external threaded bottom bracket, sealed bearing hubs and space for mudguards. You get rack mounts too. It is fitted with 32mm tyres but it'll take 35s if you don't fit 'guards. 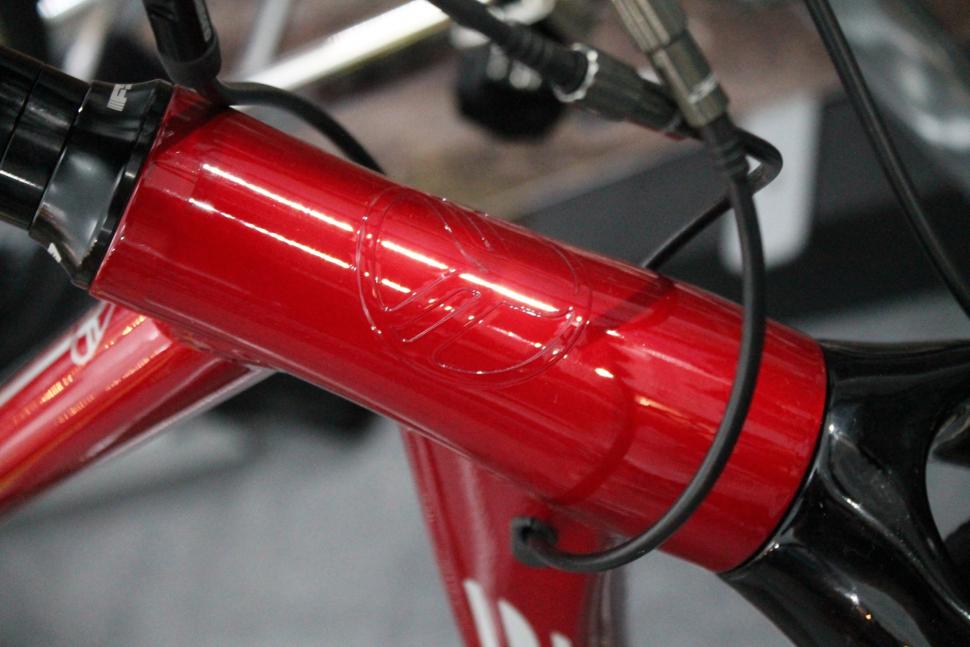 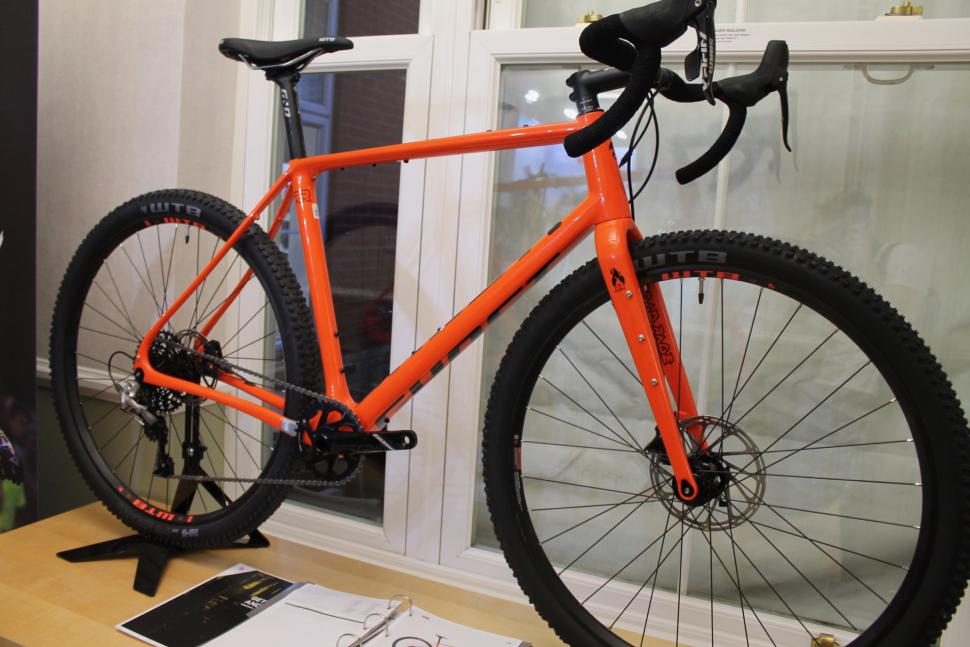 The Fire Road Rage 6.9 (£2,399.99) from Germany's Ghost is built around a carbon-fibre frame and has various luggage carrying capabilities. You can bolt a bridge between the seatstays if you want to fit mudguards. 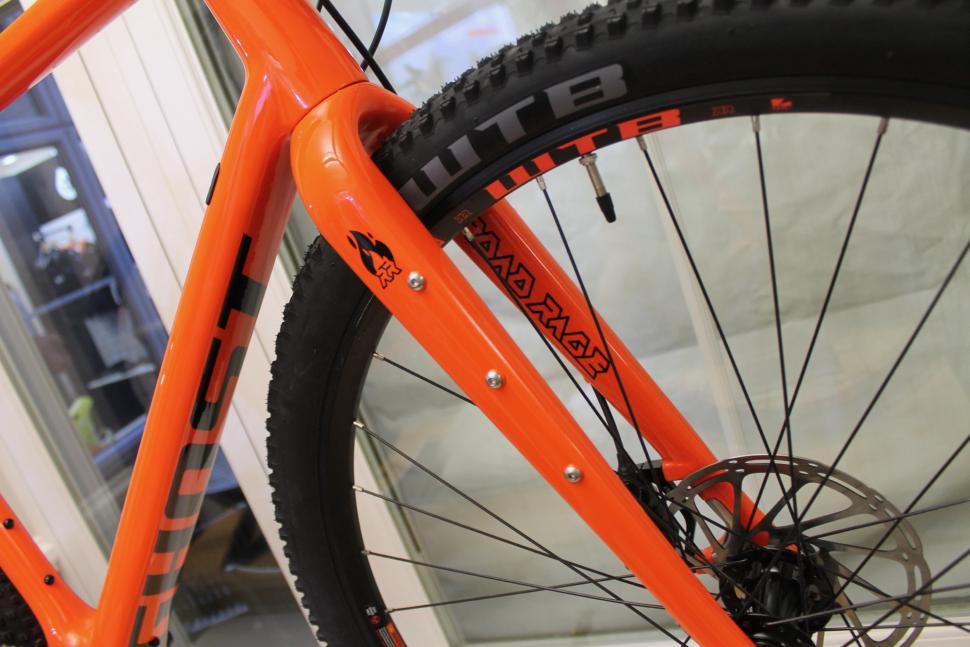 This bike comes with a SRAM Rival 1 drivetrain with post mount Apex hydraulic disc brakes. Both the wheels and the tyres are from WTB. 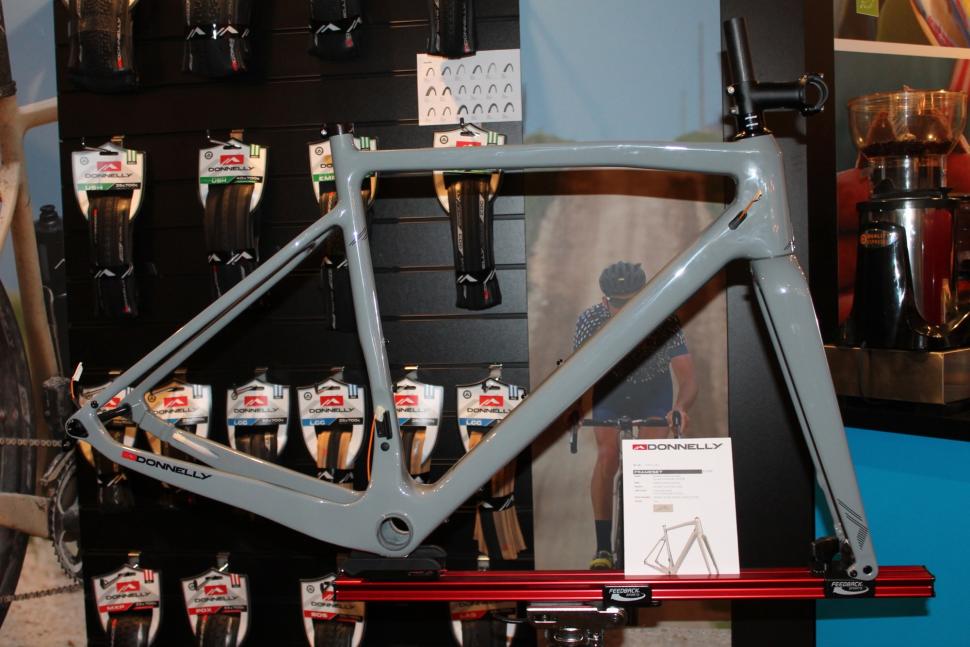 Donnelly's G//C (Gravel Carbon) frameset is made from high modulus carbon-fibre and takes 12mm thru axles front and rear. The bottom bracket is PressFit 86. There's enough clearance for 700c tyres in a 45mm width, or 650b tyres up to 50mm wide. Although built to a gravel-specific geometry, the G//C does come with mudguard mounts. 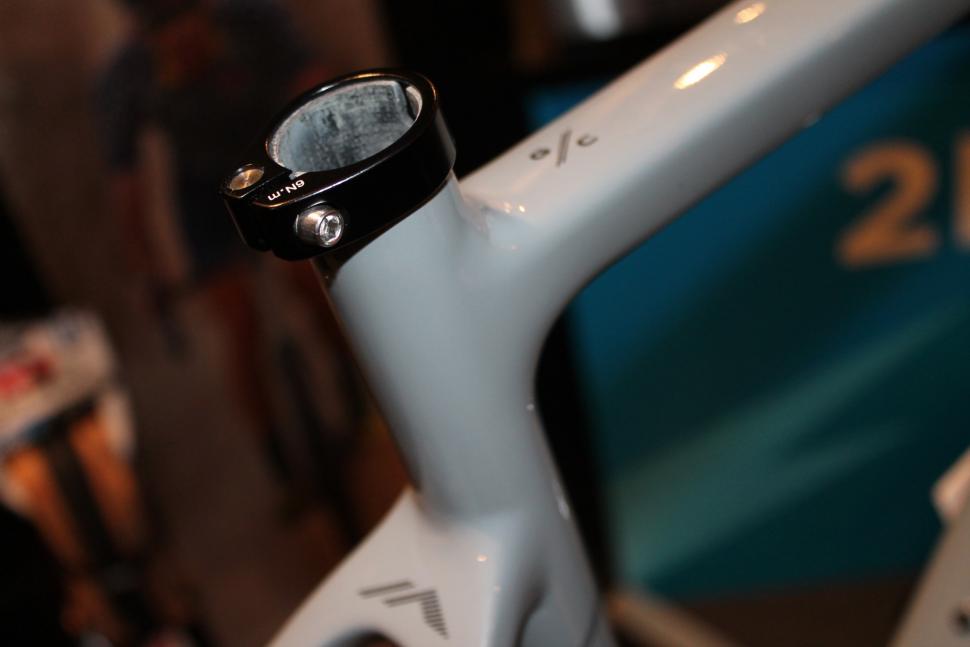 The £1,699 price includes axles, an FSA Orbit headset, and a seatpost clamp as well as the frame and fork. The C//C is similar in many ways — it is also made from high modulus carbon-fibre and takes 12mm thru axles and a PressFit 86 BB — but this is a cyclocross model (C//C stands for Cross Carbon) so it's built to an entirely different geometry with a shorter head tube, shorter chainstays, a smaller bottom bracket drop and less fork rake. It doesn't have mudguard mounts. 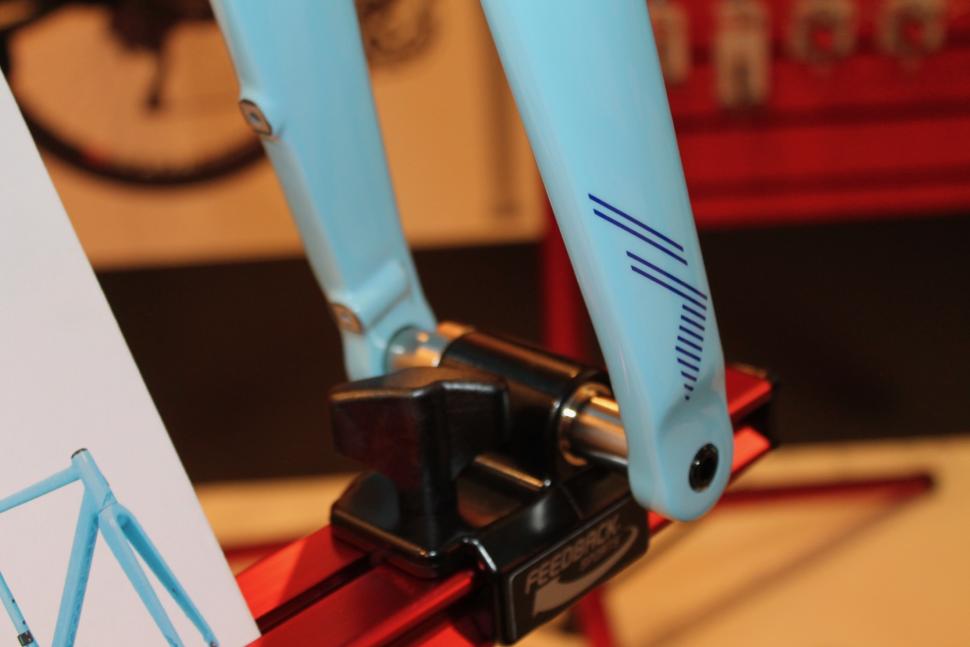 This one is £1,699 too. The sky blue finish is way more vivid and attractive in real life than it looks in these photos. The 60 TPI EMP tyres are designed with a tight pattern for gravel/adventure riding, and grippy shoulders to handle aggressive cornering. There's an integrated puncture protection belt under the tread. They come in a 38mm width although a 40mm version will probably be available further down the line. 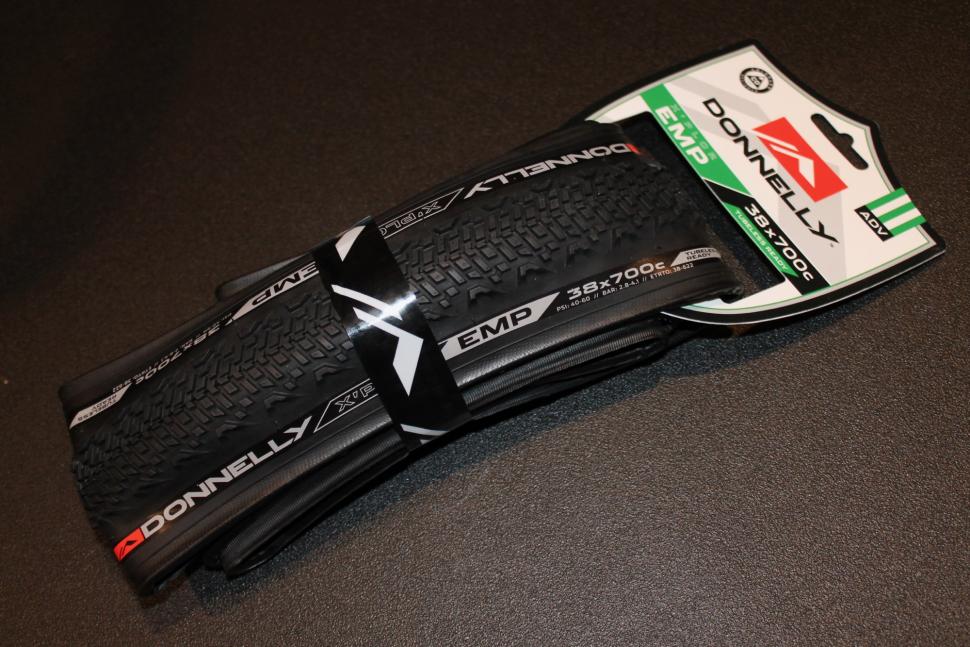 EMP, by the way, is the airport code for Emporia, Kansas, which is where you'll probably fly to if you ever fancy taking part in the Dirty Kanza gravel grinder.

The late, great Steve Worland reviewed the Surly Straggler for us way back in 2014, describing it as a "wonderfully versatile all-rounder that can hit the trails, the streets or the long-haul open road; it might be the only bike you need, except for all the others".

According to Surly, "It’s a day tripper and a weekender. It’s a ‘rough road’ road bike. It’s a cyclocross bike with no pretence about racing. It’s a utilitarian townie. It’s a light-duty touring bike. It’s an all-weather commuter."

In many ways Surly were ahead of the game, making rough and tough all-rounders while most of the other Johnny-com-latelies were still in short trousers. The cromo Straggler frameset is priced at £650 while a complete bike, with a SRAM Apex 1 groupset, is £1,750. 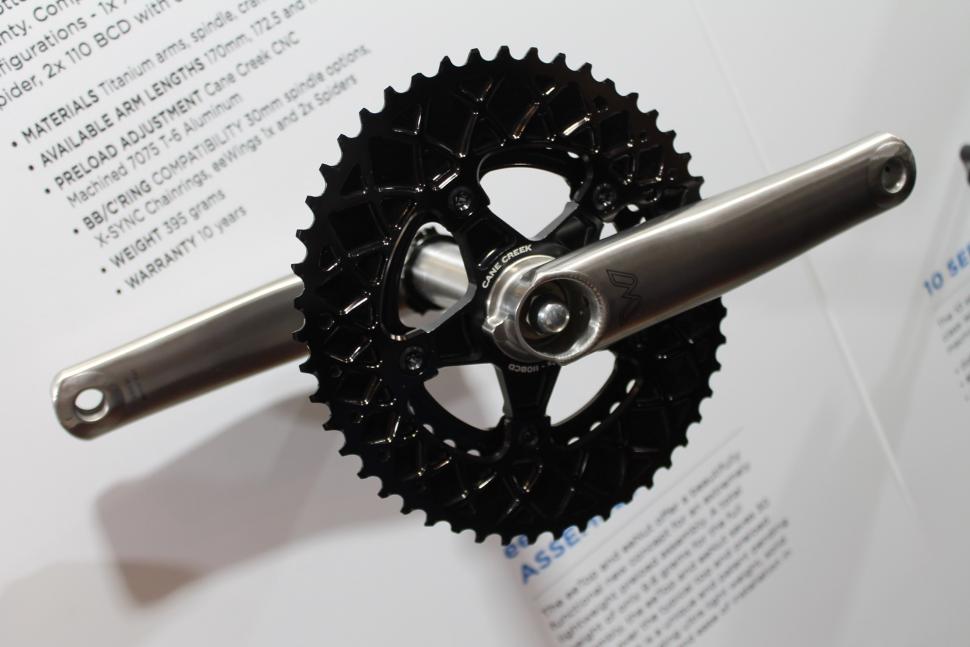 Cane Creek's eeWings All-Road chainset is a development of an existing mountain bike design. The cranks are 3Al/2.5V titanium with a 30mm diameter CNCed 6Al/4V axle. 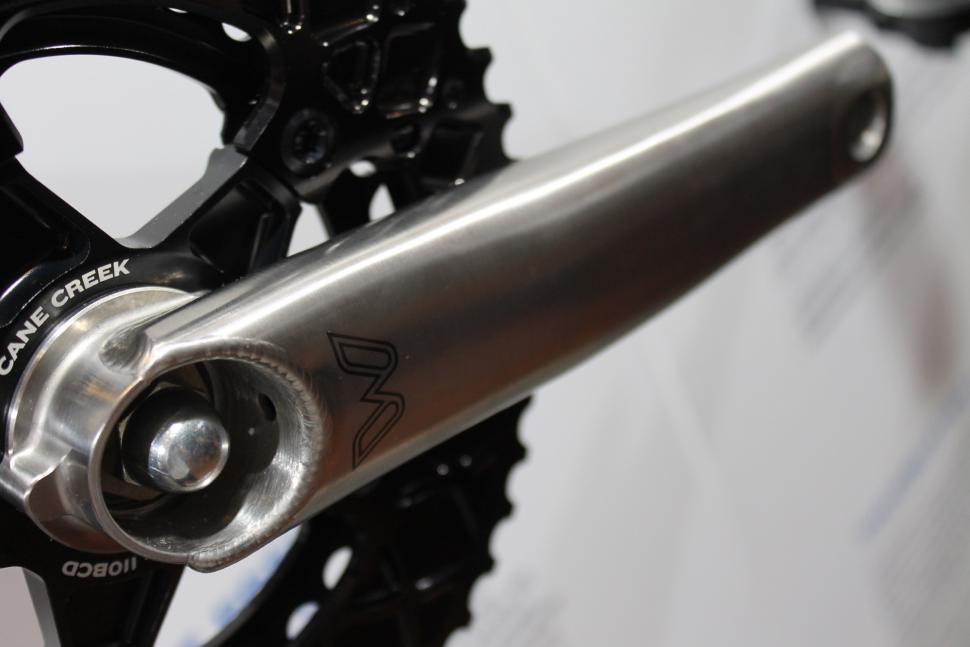 Along with the aluminium bottom bracket preloader, they weigh less than 400g — about the same as premium carbon cranks but 20-30% stiffer, according to Cane Creek. With so much black around these day, they look distinctive too. 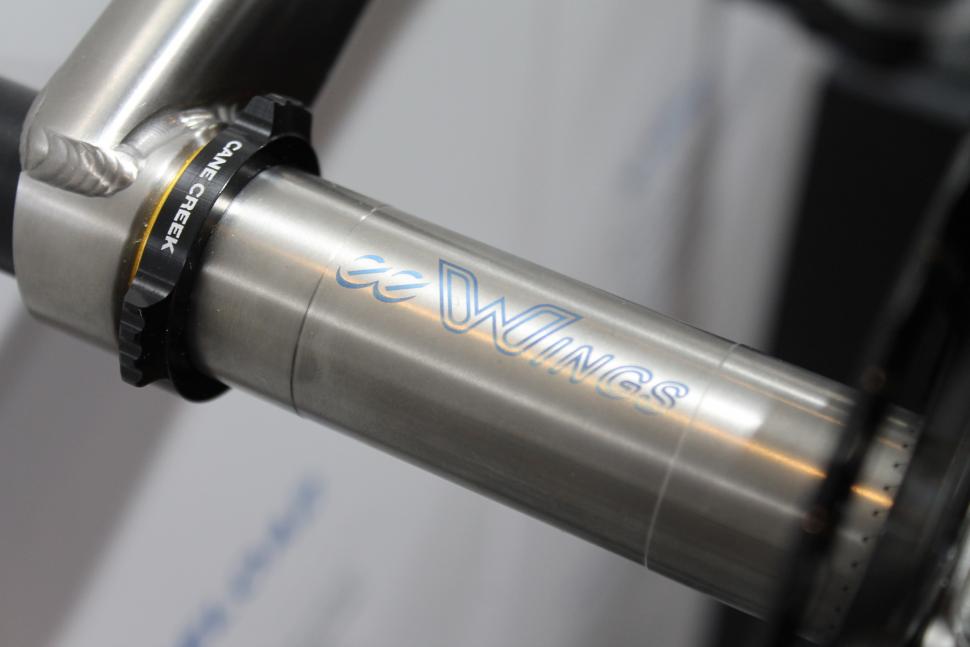 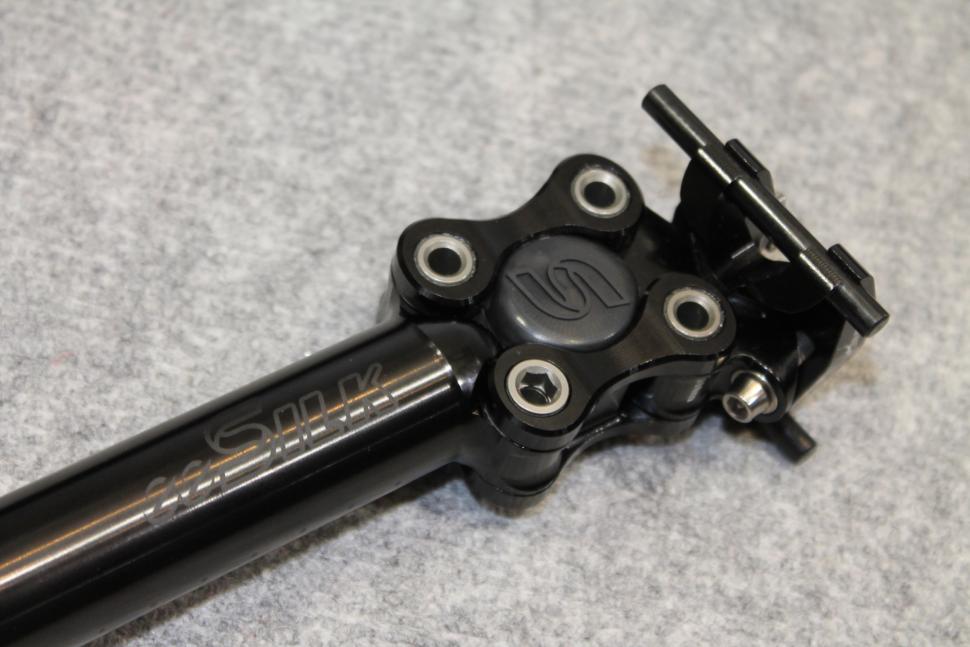 We first saw Cane Creek's eeSilk suspension seatpost at Eurobike last year and now it's available in the UK at £299.99.

The post is made from forged aluminium with a machined finish but the interesting bit is up top where an interchangeable elastomer and aluminium pivots/linkages provide 20mm of travel to add comfort and control. 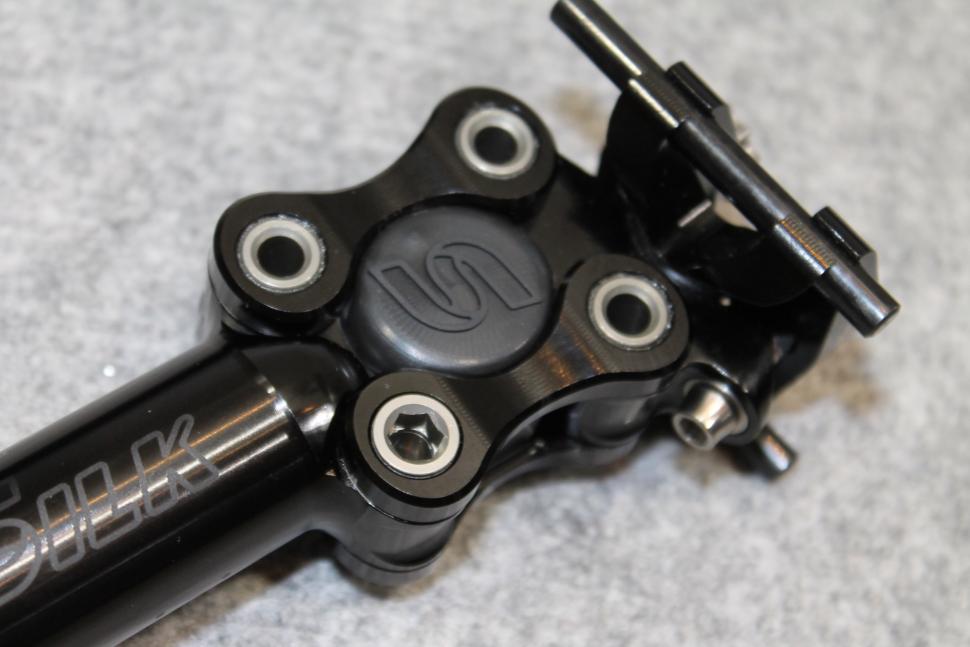 The eeSilk seatpost is 350mm long and weighs a claimed 295g, which really isn't a lot, especially considering the maximum rider weight of 149kg (23st 6lb).

Cane Creek offers shims that allow the seatpost to be fitted to "virtually any round seat tube larger than 27.2mm up to 31.8mm".

1
“Everyday tasks have become my new challenge”: Christina Mackenzie in “excruciating pain” after being struck by hit-and-run motorist
2
Cyclists report multiple muggings and thefts on London cycle route
3
Twin brothers accused of murdering charity cyclist after hitting him with car while drunk
4
Canyon revamps Inflite cyclocross range for 2023
5
“If I assaulted children, I’d be locked up”: Father of teenage girls involved in Mathieu van der Poel hotel incident slams Dutch star’s fine
6
Near Miss of the Day 825: Police refuse to prosecute because cyclist swore after driver pulled out on him
7
Annemiek van Vleuten overcomes fractured elbow to win World Championships with stunning last-gasp attack
8
"I've never seen anything like it": Cyclists hospitalised by loose gravel crash seek compensation from council